Despite setbacks in some key markets, the winners of this year's Environmental Finance Market Rankings are generally bullish about the growth of existing trading systems and the creation of new ones

Environmental markets rarely run smoothly for very long. This time last year, the winners in our annual Market Rankings were optimistic that much of the uncertainty that had bedevilled the markets in previous years had been dispelled by new regulations and reforms of key markets.

Companies were emailed in October and asked to nominate the leading traders, brokers and service providers in the markets covering carbon emissions, renewable energy certificates, and weather and catastrophe risk, via an online survey. Voters were asked to vote only in those categories in which they had direct experience and to make their judgements on the basis of: efficiency and speed of transaction; reliability; innovation; quality of information and services provided; and influence on the market, not just the volume of transactions handled. More than 600 completed responses were received. Only one vote per company site was allowed and those firms that nominated themselves had their votes disregarded.

This year's major political upheavals – the UK's 'Brexit' vote and the victory of Donald Trump in the US presidential election – have not destroyed any markets, but have certainly cast a shadow over some.

But this year's winners remain generally bullish. "We're excited about the future," says Kevin Townsend at repeat winner Bluesource, a US developer of environmental projects. Among the company's goals for the next decade, is to "create as yet unknown environmental markets, products and services that lower the cost and improve the efficacy of beneficial environmental change."

Not all the winners have such grand ambitions, but most are confident that market solutions to environmental challenges will continue to expand.

The big three winners in this year's poll were the same as in 2015, with Baker & McKenzie the dominant law firm in carbon and renewables markets, Evolution Markets retaining its crown as top carbon broker, and Endurance Global Weather again voted Best Dealer globally.

Other multiple winners this year include US company Karbone and Zurich-based South Pole Group. Both won in two carbon categories and two renewables categories.

South Pole has taken on new staff during the year to enable it to help more countries implement their emission reduction plans submitted as part of the 2015 Paris Agreement. "We're quite upbeat," said a spokesman.

As is Karbone. Despite an excess of Renewable Energy Certificates (RECs) in some markets in 2016,"the RECs market continues to be an excellent mechanism for getting renewable energy projects online," says CEO Izzet Bensusan.

A supply/demand imbalance also dogs the EU Emissions Trading System and the Brexit decision is another bearish influence on a market already struggling with allowance prices 40% down on a year ago.

But in the US, traders are generally optimistic that the California carbon market – the second biggest – will feel little impact from the election of a climate change sceptic as the country's next president. 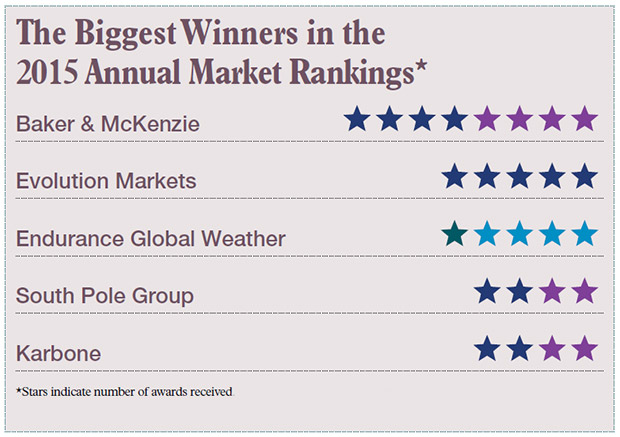 Trump's victory makes it unlikely that president Obama's Clean Power Plan will be enacted, but carbon market specialists are confident that several states will press ahead with the policies they developed to comply with the Plan.

"We're expecting no aggressive action on climate change at the federal level," says Rick Saines, of Baker & McKenzie. But "there is still good momentum for carbon markets even with the uncertainty that Trump's election has caused," says Zac Eyler of Ruby Canyon Engineering, another repeat winner.

"California, Quebec, Ontario, British Columbia, etc. show no signs of slowing down their programmes over the coming years," he adds.

Further afield, other countries are pressing ahead with emission reduction plans, in line with their commitments under the Paris Agreement, and in many cases, these involve carbon trading. Chief among them is the national Chinese market that is set to launch next year.

Implementation of the Agreement is creating plenty of new work for many of this year's winners, much of it to do with the roll out of renewable energy capacity.

Plunging costs have helped stimulate rapid growth of wind and solar energy in recent years but this increase in supply has hit the price of RECs in the US. This was compounded by a relatively warm winter last year which depressed power demand in both Europe and North America.

In response, a growing number of European utilities are looking to use temperature-based weather hedges to protect their revenues. Most winners in the weather risk section of this year's Rankings expect to see increasing use of more complex weather contracts to protect against low wind speeds and lack of sunshine.

They also point to the US agriculture sector as a promising growth area for weather hedging. This industry is also a major force in the expanding market for Renewable Identification Numbers which track the percentage of biofuel mixed into US transport fuel.

Airlines are also seen as a likely source of new business by many of this year's winners, in light of the industry's commitment to launch a new carbon offset market in 2021. And, with increasing interest in the use of markets to improve water supplies, reduce deforestation and even protect biodiversity, optimists think the future looks bright for environmental markets.