There are numerous ways in which cities in the 'global South' can tap into the green bond market, argues Padraig Oliver

The population in developing and emerging countries is urbanising at three times the rate of developed countries. But cities in the 'Global South' have limited access to capital to invest in water, energy, housing and transportation systems to meet the needs of growing urban populations.

In recent years, green bond markets have emerged as a way for investors in the capital markets to access sustainable investments. Cities have taken note. European cities in France and Sweden have been issuing green bonds since 2012. Municipalities in the US have a long track record of raising low-cost debt in the municipal bond market but only recently have begun to label bonds as 'green' in order to meet this demand signal from investors.

So how much finance has flowed from green bond markets to cities in developing countries?

Climate Policy Initiative (CPI) analysis, shown in Figure 1, estimates that approximately $2.2 billion of total flows in the green bond market have been directed towards cities in developing countries ("the South") compared to $17 billion in developed countries ("the North"). 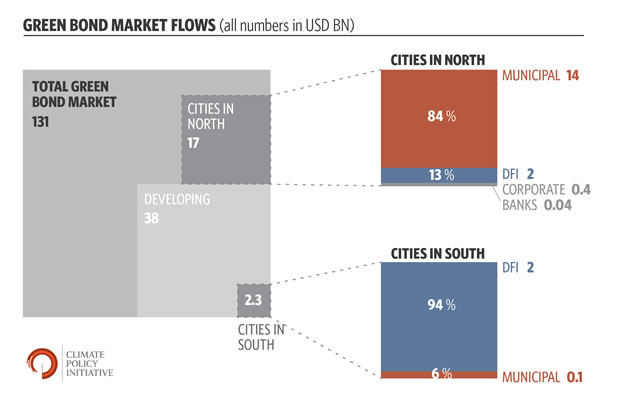 The figure below breaks down the sources of those flows to cities in the North and South. Cities in the North mainly use their own municipal (MUNI) issuance power (84%) but also benefit from Development Finance Institutions (DFI) linking city-based projects to their green bonds (13%), while cities in the developing countries rely almost entirely on DFIs to raise finance for their projects (94%).

To date, Johannesburg's $137 million bond is the only municipal green bond issued in developing countries. Important work to help address this imbalance is underway. It aims to develop local capital markets and improve the creditworthiness of cities.

Our analysis shows the sources of green bond market flows to developing countries are diversifying.

Since 2008, $39 billion has been directed to projects or activities in developing countries. From 2008-2013, this consisted entirely of flows from Development Finance Institutions but, from 2014, domestic corporate issuance began to grow and was then joined by issuance from commercial banks from China and India in 2016. 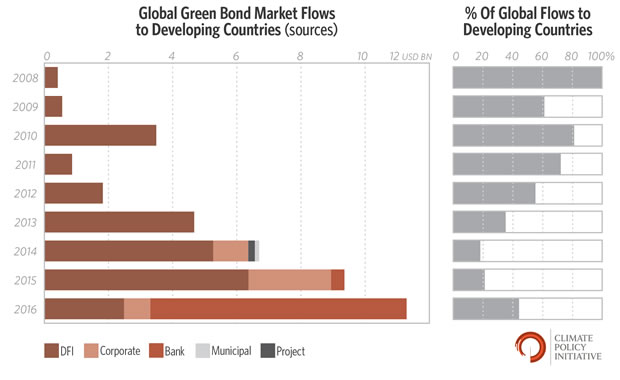 Clearly, cities don't necessarily need to issue their own bonds to access capital via the green bond market. City or municipal-based infrastructure development companies could provide one option for them to do so. Such companies commonly raise finance in developing countries such as China, often with central government guarantees.

Perhaps the avenue with the most significant potential is through domestic, bilateral and multilateral development finance institutions (DFIs). DFIs could scale up their own green bond mandates to increase support for city-based infrastructure in developing countries, work to source and help finance projects, and eventually support cities to issue their own bonds through guarantees or other risk mitigation instruments. 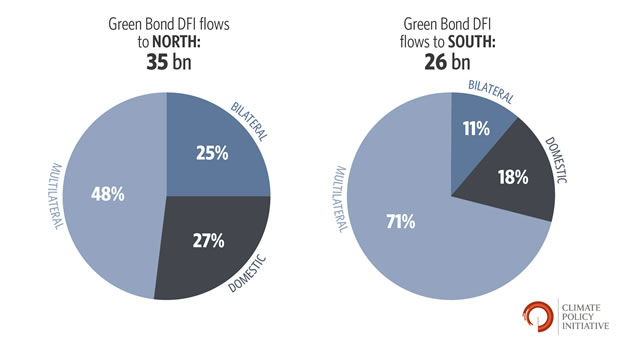 Domestic DFIs in developing countries, such as NAFIN in Mexico and the Agricultural Bank of China, already account for 18% of total flows from DFIs' green bonds to the South. They could provide a potential source of collaboration for cities.

Multilateral DFIs such as the World Bank, EIB, ADB and AfDB currently only link $2 billion of the $18 billion flowing to the south to city-based projects. There is potential to scale up.

CPI's analysis will inform guidelines for city administrators and stakeholders in developing countries on how to develop a market access strategy for the Green Bonds for Cities project. From autumn 2016, this project will provide toolkits and training sessions with the aim of expanding green bond market flows to cities in the South.

CPI is working with South Pole Group on this in collaboration with ICLEI and Climate Bonds Initiative. The project is funded as part of the Low-Carbon City Lab (LoCaL) under Climate KIC.

The effect of the pandemic on sustainability strategy

With many businesses struggling to stay afloat through the Covid-19 pandemic, what has happened to their sustainability ambitions?