A growing number of mainstream investment firms are allocating capital to preserving and enhancing natural assets, but much more is needed, say Graham Cooper and Sophie Tremolet

Many institutional investors are investing in natural capital to boost the resilience of their portfolios, reduce risk and/or enhance their reputation, according to a report from The Nature Conservancy and Environmental Finance.

The report – Investing in Nature: Private Finance for Nature-based Resilience – is based on a global survey of asset owners, asset managers and financial intermediaries (including banks, investment advisors, consultancies and NGOs).

The survey confirmed that a growing number of private sector investors are factoring environmental concerns into their investment decisions, in response to stakeholder pressure, government guidance and regulatory changes. To date, the focus has largely been on greenhouse gas (GHG) emissions but, increasingly, attention is turning to natural assets from which humans derive a wide range of goods and services.

Companies' dependency on natural capital is now a factor in the investment decisions of many mainstream asset owners, such as pension funds and insurance companies, as well as specialist 'impact' investors.
The close links between the global challenges of climate change and the rapid decline in natural resources (freshwater, oceans, soil and biodiversity) are becoming increasingly well understood by the investment community.

Indeed, 'resilience against climate change' was the most commonly cited driver of current and future investments in natural capital. This is in line with studies showing that nature-based approaches to climate change adaptation can effectively bring down the total costs of resilience investments.

Among the largest investors, however, 'reputation' was considered even more important. This reflects societal changes triggered by science-based warnings about the deteriorating state of the natural environment and amplified by public figures such as the Pope, television presenter David Attenborough and teenage activist Greta Thunberg.

"Young people and millennials are looking for 'companies with a conscience'," said Andrew Mitchell, founder of the Natural Capital Finance Alliance, a global initiative to integrate natural capital considerations into financial products and services. "The smart money is paying attention to this."

To date, forestry has received the most attention among nature-based solutions to climate change, as deforestation is estimated to be responsible for about 20% of global GHG emissions. Increasingly, however, investors are turning their attention to other nature-based investments, such as sustainable agriculture, peatland and the oceans.

According to the survey respondents, nature-based projects to improve the quality and supply of water are expected to see the greatest increase in investment over the next five years, albeit from a relatively low level.
The survey revealed a wide range of approaches to investing in natural capital, including purchases of real assets such as forests or agricultural land, private and listed equity, mitigation offsets for water, biodiversity and GHGs and various green debt instruments.

Green bonds are rapidly becoming popular for making sustainable investments, but few of them help finance the conservation of natural capital. However, this market is proving increasingly attractive to large mainstream investors and new standards are being developed to give the market clearer visibility about which of these bonds support nature-based projects.

Other innovative debt instruments used to channel private finance to natural capital projects include sustainability-linked loans, in which the interest paid depends on the environmental performance of the borrower.
Blended finance funds, in which private institutions invest alongside public finance institutions and/or philanthropic organisations, are another popular investment option. The main attraction of this approach is the de-risking provided by the public or philanthropic capital. Few of these funds exceed $100 million, however. Larger private investors mostly prefer the bond market, where transactions of $300 million to $1 billion are common, offering greater liquidity and relatively lower transaction costs.

Survey respondents pointed to the scarcity of large investment vehicles as the main obstacle limiting the allocation of capital by mainstream investors to nature-based projects. But, unfortunately, such projects do not easily lend themselves to 'commodification'. Each investment needs to be tailor-made for specific local conditions. They therefore tend to be small-scale interventions, riskier than most conventional investments, and take longer to set up.

However, there is a growing understanding that many of these projects offer multiple revenue streams and can be profitable. Indeed, long-term profit opportunities were identified as a major driver of current and future investments in natural capital.

Most respondents said they expect 'sustainable' investments, including those in natural capital, to yield comparable returns to traditional investments. However, a greater percentage of large institutions said they expect them to generate higher returns, to compensate for the greater perceived risk. Among smaller investors, a higher percentage are prepared to accept lower returns, provided the investments have strong evidence of environmental impact.

The increasing interest in natural capital from private sector investors is, in part, a reflection of the rapidly expanding market in sustainable investments, in general, driven largely by initiatives stemming, directly or indirectly, from the Paris Agreement on climate change and the UN's Sustainable Development Goals (SDGs).

Natural capital investments currently account for a tiny slice of this market but, with growing recognition of the role of green infrastructure in climate change adaptation and the fact that natural assets underpin almost all the SDGs (see Figure 1), the outlook is promising. 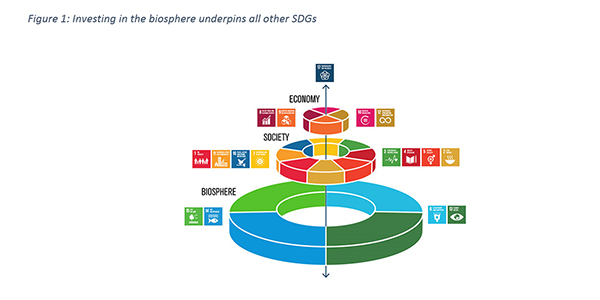 As an example of how investor behaviour is changing, BNP Paribas Asset Management (BNPP AM), which manages assets of more than €420 billion, is now "moving 'beyond carbon' and working to embed natural capital research into its analysis of environmental, social and governance (ESG) issues," according to ESG analyst Robert-Alexandre Poujade.

Similarly, Dutch asset manager Actiam, with assets under management of about €60 billion, recently updated its investment policy to screen investee companies against the 'planetary boundaries' which "indicate the maximum of what society can consume from natural resources such as water, land and forests."

Although neither the Paris Agreement nor the SDGs impose any obligations on individual companies or investors, they have given rise to a host of industry and government-backed 'best practice' principles that are changing corporate behaviour and investment decisions. Several of these urge financial institutions to pay closer attention to the sustainable use of natural resources.

One of the most influential initiatives has been the Task Force on Climate-related Financial Disclosures (TCFD), set up by the G20's Financial Stability Board to provide investors, lenders and insurers with consistent climate-related financial risk disclosures.

More than half of the survey respondents said the TCFD recommendations and related initiatives had already triggered a change in their investment policies, or was expected to do so in future. The figure was even higher for the largest asset managers and asset owners.

The report suggests a similar Task Force on Nature-related Financial Disclosures (TNFD) – already under discussion by several central banks and others – could have a significant impact on investments in nature-based projects.

It urges governments to support the creation of such a Task Force to help scale up private sector investments in natural capital and also calls for action by investors, market intermediaries and project sponsors.(see Table A)

The full report can be found here. 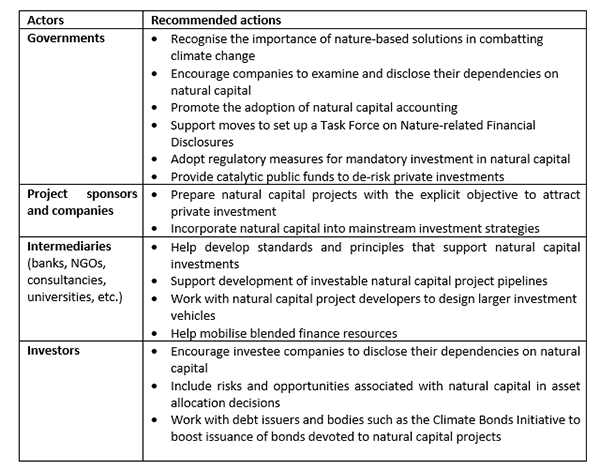