Impact report of the year (for investors): Affirmative Investment Management

AIM, which manages the Lombard Odier Global Climate Bond fund, says its impact reports "represent some of the most comprehensive impact records available in the marketplace for a debt product".

The 50-page report covers over 93% of the fund holdings as at the end of 2019. AIM said the level of coverage is particularly impressive "given the increased challenge in recent months to collate data and information from underlying issuers, due to the Covid-19 pandemic". It said it typically engages with about 90% of the issuers of bonds the investment manager holds to get more information on the bonds' use of proceeds.

The fund invested in bonds issued against more than 106 different bond frameworks in 2019, with disbursements to almost 150 countries to finance 1,350 different eligible projects.

It assesses each security for expected impact and disclosure, which it says is a core assessment within its investment process. AIM said it has developed its own internal verification process, 'SPECTRUM', which enables it to accurately track allocation of proceeds and appropriately pro-rata associated impact.

AIM runs the Carbon Yield methodology with the help of ISS ESG to calculate avoided emissions, finding that investments contributed to the avoidance of 57,227 tonnes of greenhouse gas emissions in 2019.

AIM's latest report also included TCFD-aligned reporting for the first time. This includes an assessment of the Weighted Average Carbon Intensity (WACI) of the portfolio – with coverage of about 54% of the portfolio – measured as 54.4 tonnes of GHG emissions per million dollars of revenue.

Also new to the latest report was a screening of the fund's holdings against four different warming scenarios to judge climate risk. It worked with South Pole to conduct the analysis and plans to further develop the assessment in its next impact report, to be published this year.

LO Funds – Global Climate Bond, which was launched in March 2017, had $322 million in assets under management as at the end of 2019, which grew to $682 million by end 2020. More than 80% of its bond investments were in green bonds, with the remaining percentage in sustainability, social and unlabeled impact bonds.

A spokeswoman for AIM said: "We are delighted to be recognised as leaders in the impact reporting space. An important part of our investment philosophy is ensuring our investors receive transparent impact reporting, allowing our clients to monitor the real positive environmental and/or social impact of their investments as well as the financial return." 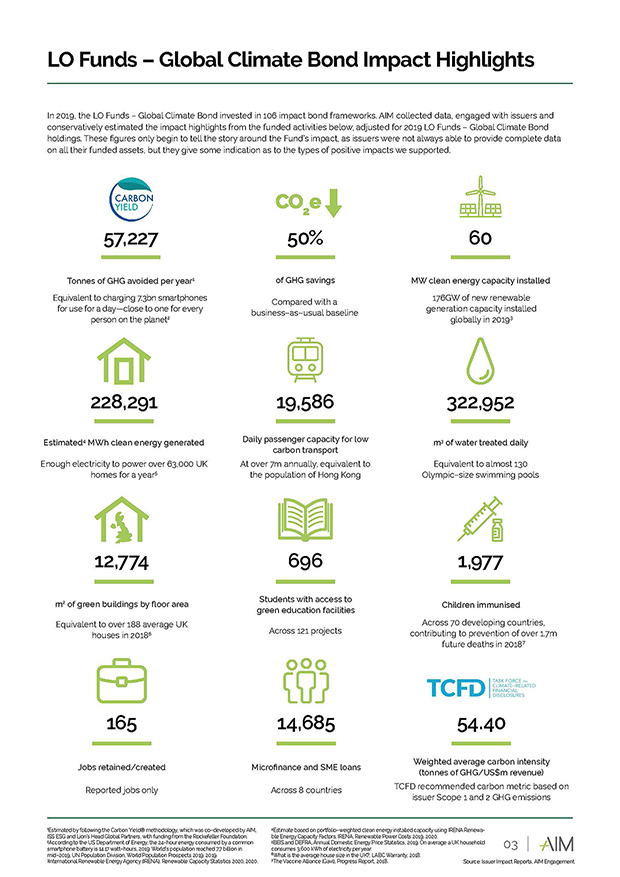