Berlin Hyp in a Nutshell

Your contacts at Berlin Hyp 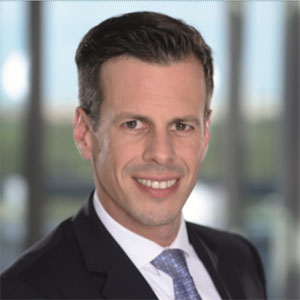 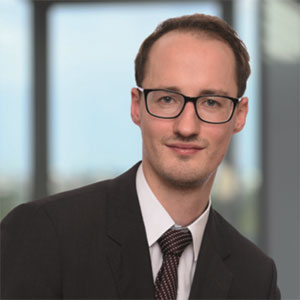 With approximately EUR 27bn of total assets, Berlin Hyp is a medium-sized German mortgage bank specialised in large-volume real estate financing for professional investors and housing societies, and developing customised financing solutions for them. Its most important refinancing instrument is the Mortgage Pfandbrief, the 250 years old German version of covered bonds. As a partner of the German savings banks, it also provides those institutions with a comprehensive range of products and services. Its clear focus, more than 150 years of experience, and integration into the German Savings Banks Finance Group make Berlin Hyp a leading German real estate and Pfandbrief bank.

Berlin Hyp pursues a long-term, responsible and riskconscious corporate strategy. In doing so, it makes a reliable contribution to the positive development of the economy and society. The bank’s sustainability management focuses on integrating aspects of environmental awareness, social responsibility and good corporate governance in its business throughout the entire value chain. This is recognized by sustainability rating agencies who classify the bank as market leader. With a rating of 86/100 Sustainalytics puts Berlin Hyp on the 5th place of 332 banks worldwide. ISSoekom assigns a B- (Prime) which is equivalent to the 2nd place out of 53 mortgage and public sector lenders.

With approximately EUR 14bn of outstanding Pfandbriefe, Berlin Hyp is one of the bigger issuers in that asset class. At the same time, its outstanding senior unsecured bonds sum up to more than EUR 6bn, containing seven benchmark issues with principals of at least EUR 500mn per bond. This makes Berlin Hyp one of the most frequent issuers of senior unsecured bonds in Germany.

In recent years Berlin Hyp evoked international attention when it pioneered the capital market with several innovations. In August 2018 the mortgage lender pioneered as the first German bank to issue a syndicated Senior Preferred bond. In March 2016 it became the first issuer worldwide to successfully place a covered bond with a negative yield at issuance on the market. Almost one year prior to that, in April 2015, the bank became the first issuer of a Green Pfandbrief, i.e. a Mortgage Pfandbrief that is used to refinance loans for green buildings. In June 2016 Berlin Hyp extended its green bond franchise to senior unsecured bonds and became the first bank issuer on the global capital market to issue green bonds in more than one asset class. Having issued six benchmark-sized green bonds until now – three Green Pfandbrief and three green senior unsecured - it currently is the most active European corporate bank issuer in this market.

In 2016 Berlin Hyp installed a Green Bond Framework that applies to all of the bank’s green bonds, Green Pfandbrief and green senior unsecured bonds. Since then it has been revised twice, making it stricter every time.

All eligible assets are loans for the acquisition, the construction or the refurbishment of green buildings on Berlin Hyp’s balance sheet and are part of its mortgage cover pool in the case of Green Pfandbriefe. In addition, Berlin Hyp makes every effort to invest an amount equivalent to the net proceeds of the green bonds in new eligible assets and (in the case of Green Pfandbriefe) to include these into its mortgage cover pool. The eligible assets remain on the bank’s balance sheet. Investors do not bear the credit risk of the assets and rank pari-passu with existing covered bondholders (in the case of Green Pfandbriefe) or senior unsecured bondholders. Berlin Hyp’s green bonds are fully aligned with the Green Bond Principles and are included in the main green bond indices, such as Barclays MSCI, S&P, BAML and Solactive. 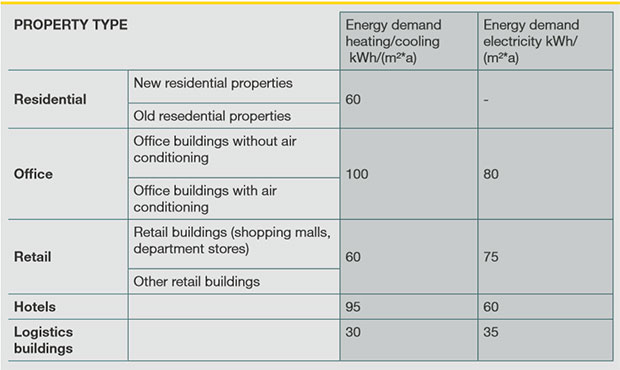 Eligible assets consist exclusively of loans for energy-efficient, sustainable commercial real estate. In order to classify properties as green buildings, Berlin Hyp defined maximum energy demand levels for various building categories (see table below). These limits are subject to constant surveillance by the bank’s own Green Building Commission. In April 2018 they have been re-defined, i.e. lowered and split into energy demand for heating/warmth and energy demand for electricity. The bank then was the first green bond issuer to divide energy efficiency into its single components. Compliance with the thresholds is proven by energy performance certificates which the bank asks its borrowers to provide as an integral part of the loan origination process. In addition, the bank asks its customers for sustainability certificates issued by re-known institutions such as LEED, BREEAM, DGNB and HQE. In order to be eligible for the green finance portfolio these have to reach a certain minimum. Finally Berlin Hyp excludes various controversial businesses in its green buildings. 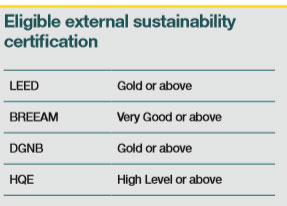 Berlin Hyp provides an annual Green Bond Reporting on a separate website (www.green-pfandbrief.com), which among others informs about the new business in green assets on a loan-by-loan basis and which also contains an impact reporting on carbon emissions avoidance. The impact calculation was carried out for the first time in April 2016. Berlin Hyp is the only issuer in the green bond market that measures the carbon avoidance through its green bonds by employing two different baselines, one representing the European average of existing commercial real estate, the other one being derived from the reference values given by the German energy savings regulation (EnEV). In 2018 the CO2 avoided by an investment of EUR 1mn in a Berlin Hyp green bond was between 8.7 and 36.3 t/p.a., depending on which baseline investors choose and whether they want to base calculation on the whole financed property or solely on Berlin Hyp’s initial LTV. This way of reporting is seen as bestin- class by the Climate Bonds Initiative (CBI), and Berlin Hyp has been awarded two times in a row “Best Green/SRI Issuer for Post-Deal Reporting” by Global Capital in 2017 and 2018.

In addition, the website contains all other relevant information and documents on the bank’s green bonds, e.g. final terms, investor presentations, second party opinions and annual re-verifications by ISS-oekom.

Additionality is one of the key words in the green bond community and describes, how much the issuance of a green bond has changed the issuer itself. Berlin Hyp serves many market participants as a good example for that, which can best be explained by three prominent out of the various measures and actions the bank has been taken since issuing its first Green Pfandbrief:

Loans for green buildings are offered at a discount of 10 basis points. This measure has been taken in order to grow the green finance portfolio, which in return was necessary given that the bank promises to invest an amount equivalent to the net proceeds of every green bond into new eligible assets. At the issuance of the first Green Pfandbrief in 2015 Berlin Hyp’s green finance portfolio contained eligible assets with a total nominal value of EUR 657mn. By October 2018 the volume has reached EUR 3.585mn representing an increase of 545%.

Since 2017 an increase of its green lending is one of Berlin Hyp’s strategic corporate goals. Until 2020 20% of the bank’s loan book shall be green. Right now it stands at 16%.

In addition Berlin Hyp takes efforts to contribute actively to the development of the green bond market and in setting best-practice standards. As the owner of the trade mark “Green Pfandbrief ”, Berlin Hyp always had a natural interest in growing the green covered bond market. After the bank had been the only issuer of green covered bonds for more than two years, from November 2017 on many other European issuers used its framework as a role model for their own issuances. The first was another German issuer, Deutsche Hypo, who entered into a license agreement with Berlin Hyp allowing them to use the Green Pfandbrief trademark. Other issuers from Germany but also Norway and Sweden followed with their own green covered bond issuances. In order to support future growth, Berlin Hyp recently entered into a process of transferring its Green Pfandbrief trademark to the Association of German Pfandbrief Banks (vdp) with the aim to enable more issuers to come to the market on the basis of common criteria. Internationally it is one of the founding members of the Energy-efficient Mortgages Action Plan (EeMAP) and contributed to a European definition for energy efficient mortgages. In June 2018 Berlin Hyp also became one of this initiative’s pilot banks. Berlin Hyp is an active partner of the Climate Bonds Initiative and sponsored the CBI’s Post Issuance Reporting in the Green Bond Market study in 2017. 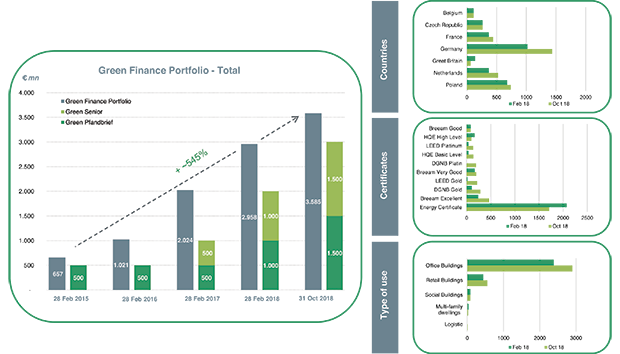