Currently, most green bond issuers disclose the reduced or avoided carbon of the projects they finance. However, as Franklin Templeton found, analysing their 'induced carbon' can dramatically change the calculation. Gail Counihan explains.

Environmental Finance: You recently published the first Impact Report for the Franklin Liberty Euro Green Bond UCITS ETF. It asked the rather provocative question, "when is a green bond not really green?" What is behind that concern?

Gail Counihan: To better understand the impact of the Green Bond ETF, we decided to use data from Carbon4Finance, because its methodology includes an assessment of end-to- end carbon emissions, including the carbon produced during a project's production and manufacturing phase. This is something that we didn't see as standard in green bond impact reporting, but which we think is fundamental to understanding whether a green bond actually provides a climate benefit or not.

Our starting point is the concept of the carbon budget – the volume of carbon that we can emit without risking a temperature rise of more than 1.5°C. That is what the Paris Agreement is based upon. Our approach is a common-sense way of trying to take the concept of a carbon budget seriously: if a green bond project emits more carbon than it actually reduces or removes from the atmosphere, then how can we genuinely consider that to be a green bond?

EF: Explain the concepts of 'induced carbon' and the 'carbon impact ratio'. 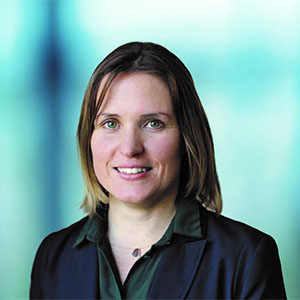 GC: Induced carbon is that which is emitted in the construction or manufacture phase of the building, the car plant or electric vehicle, or the mass transport system. Thinking about induced carbon makes us focus a lot more intently on things like the supply chain, building standards, whether the project is recycling demolition material, etc. – the specifics of the build- out phase that we found were very often not included in green bond frameworks.

The frameworks are usually based on building a new energy plant or a low-energy consumption building, but very often specific details of the construction phase will be left out. That means that we've got no idea what the induced carbon is going to be for that project.

The carbon impact ratio, meanwhile, is the ratio of avoided emissions to induced emissions.This provides a simple measure of the capacity of a project to reduce greenhouse gas emissions compared to the emissions induced by its activity. Another way to think of it is to consider how many tons of carbon can be avoided by 'spending' one ton of carbon?

EF: Fundamental to the green bond markets is high- quality disclosure from issuers.Where is this falling short?

GC: We need reporting to be reliably consistent – issuers should have to attest or rubber stamp that they have followed guidelines or a convention. ICMA [the International Capital Markets Association] has done a lot of valuable work in convening working groups to establish best practice guidelines, but essentially the reporting is a long way away from being reliably consistent. Take accounting standards; depending on which standard you use, you can be reasonably certain about what each metric includes and this allows one to compare like with like. The same can't be said of impact metrics, reduced emissions, or labelling something as 'energy efficient'.

Another big gap is disclosure in green bond frameworks. We regularly receive information that funds will be used to finance certain types of projects, but we don't get transparency or guarantees around how the projects will be implemented, what standards they will align to, or how their sourcing will be responsibly managed.

EF: The ETF focuses on three sectors: clean energy, buildings and low-carbon transport. In clean energy, how do you assess different technologies and jurisdictions?

GC: We really need to assess different jurisdictions and technologies on a case-by-case basis. Obviously, the greener the better, but green for Italy or France is probably not green for Iceland and similarly, green for Poland might be a regression for France. It depends on the existing carbon intensity of the domestic energy mix. A new technology or energy source must be evaluated for how carbon-intensive it is to establish, as well as how much less carbon-intensive it is than the incumbent energy source at producing a unit of energy.

So one size definitely doesn't fit all and it must be extremely difficult to have to codify these fuels into the EU Taxonomy as included or not — essentially, as good or bad. Eliminating lower-carbon energy sources from the mix does eliminate tactical options for some countries, although giving oil and gas companies a free pass to continue exploration doesn't feel like the right way forward either. Our view is that the EU Taxonomy revision should have focused more on induced emissions by distinguishing between existing power plants – where we have already 'spent' our carbon by building the plant – and plants that don't yet exist.

EF: Given a lack of standardisation in the definitions of 'green buildings', what criteria do you use?

GC: Most green buildings standards focus on achieving a certain level of energy output per square meter or a certain level of energy efficiency. What we learned through looking at our data is that the majority of emissions from buildings are in the construction phase; there's only a small amount of gain to be had from adhering to even very strict building standards – generally the benefit is that the buildings are less energy- intensive to run.

We realised that there wasn't nearly enough of a focus on upstream emissions, on the steel manufacturers, the concrete manufacturers, all those raw materials that green bond frameworks very often don't give us insight into. That was where we needed to focus our attention.

Although the relative gain that you get from refurbishing old buildings is quite small, it is most often worth it because of improvements in energy efficiency. Therefore, we believe that conserving and refurbishing existing buildings is more beneficial because its unlikely that we will suddenly be able to start building everything with a more sustainable upstream supply chain – the green steel and low-carbon concrete isn't yet available at scale.

EF: The carbon impact ratio for transport is relatively low compared with energy and buildings. What are the key factors you look for?

GC: For the rail projects we looked at, the carbon impact ratio was lower than we were expecting, because there is such a huge amount of induced emissions in these massive infrastructure projects. Projects that are so carbon-intensive absolutely have to be scalable – and most rail systems inherently are. If you consider how many trucks could be displaced off roads by a rail network that can transport much of Europe's freight – the decarbonisation effect is huge.

EF: Your report warns of the 'halo effect'? What is that, and how can investors control for it?

GC: There will often be reputational benefits for a company that go hand-in-hand with issuing a green bond, as such companies are seen to be starting their journey towards decarbonising and paying more attention to the impact of their products and services.

We would always prefer to invest in a company that has a plan to move to a low-carbon future than just support one individual project.

There is also a huge amount of demand for green bonds from ESG investors, so it means that there's a lot of competition for their debt. A lot of ESG funds out there will often invest fairly indiscriminately in green bonds. We don't support this approach. We will invest if we think that the issuer is sound from a fundamental credit perspective, but is also heading in the right direction with regard to its environmental strategy. This means that, when we look at its green bond framework, it mustn't look like it's a fish trying to swim upriver against the general direction of the company.

We need to watch out for the halo effect because there are some companies that will just issue a green bond without aiming to transition their overall strategy and without trying to integrate decarbonisation more widely across the balance sheet. We would always prefer to invest in a company that has a plan to move to a low-carbon future than just support one individual project.

EF: The converse of a green bond that isn't green is a 'normal' bond that you consider to be green enough for the ETF to invest in. What can that assessment be based upon?

Lastly, we look for a governance structure that is designed to support the delivery of the company strategy or the green product or service. Those three things we generally find in the bonds that we've invested in that are not labeled as green, and we generally find that, when assessed for impact, those companies did pretty well.

EF: What are the key questions green bond investors should be asking of issuers at the roadshow stage?

GC: We have specific questions that we've put together since producing our Impact Report that apply to energy, buildings and transport that other investors might find useful. For example, investors in energy projects need to know whether capacity is additional, what the local grid capacity factor is, and the lifecycle emissions from construction and operation. In buildings, green buildings standards should be disclosed, and issuers must be transparent about the emissions involved in converting old buildings or constructing new ones. In electric vehicles, the induced emissions numbers are vital, as are assumptions about asset lifetime and the sourcing of battery minerals.

Investors need to be asking these sorts of questions at roadshows, and issuers need to be in a position to give detailed answers. Anything less will raise questions over whether your green bond is, in fact, green.

Gail Counihan is a senior fixed income sustainability analyst at Franklin Templeton, based in London.