After some tough years in the traded environmental markets, the survivors have weathered the storm and see better times ahead

There's a distinctly upbeat feel to this year's Market Rankings.

Needless to say, this is hugely welcome given the tough times endured in the wake of the financial crisis, which hit some of the biggest carbon markets particularly hard.

Read more on each category:

GHG Markets - The only way is up

Renewable Energy Certificates - Trading in good times, and in bad

There is a sense that this year's winners have 'hung in there' while many around them folded or ran for the hills. Now their perseverance has left them in a strong position to reap the rewards amid signs that markets are less hostile.

Take Evolution Markets. The company is one of the market's survivors.

The White Plains, New York-based brokerage, which was founded in 2000, has again put in a strong showing in our Rankings, having won six awards in total.

It has now won Best Broker for renewable energy certificates (RECs) North America for 12 years in a row, and has held the title of Best Broker for Kyoto credits since 2007. It has been a dominant broker in the EU ETS in recent years.

The company should be in a strong position to benefit amid the wave of optimism that is now sweeping the European market.

"It may be a year in which we have seen a change of mood in terms of the market's fortunes," said David Peniket, president and chief operating officer of ICE Futures Europe, which was again voted Best Exchange for the EU ETS and Kyoto Projects credits.

"It may be a year in which we have seen a change of mood in terms of the market's fortunes" David Peniket, ICE Futures Europe

"There is now some degree of optimism around the trajectory of the EU ETS in general," he said, referring to the recently agreed 2030 emission reduction targets and ongoing debates around introducing a mechanism to prevent a repeat of the drastic oversupply problems that have hurt the market in recent years.

Law firm Baker & McKenzie can also claim an unflinching commitment to the space.

Graham Stuart, head of the London office's environmental markets practice, said the firm's "very strong client base" has been built over a protracted period, since it entered the carbon market in the late 1990s. 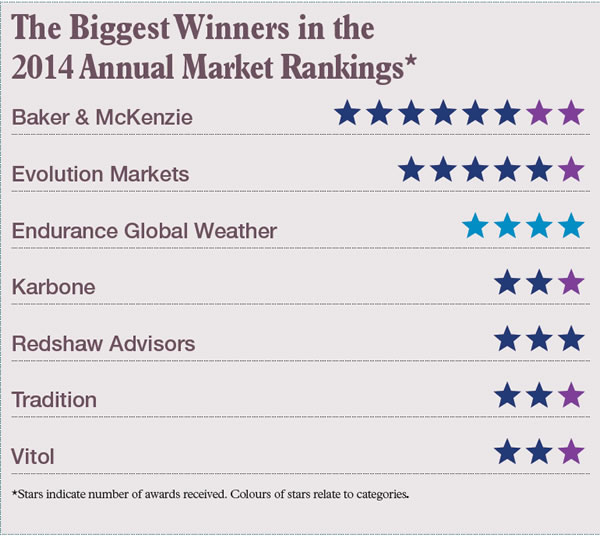 It has won the Kyoto credits law firm category in every year except one since 2005. This year it won a total of eight awards spread across the carbon markets and RECs. It has held the crown of Best Law Firm for the EU ETS and Kyoto Project credits since 2009 and 2008 respectively.

While the market is dominated by some old hands, in some cases new players have seized the opportunity to create a space for themselves, filling the void left when more established players exited the markets.

Redshaw Advisors is a perfect example. Its founder Louis Redshaw was formerly Barclays' head of environmental trading, before the bank walked away from carbon.

"We aim to fill that gap with all that was good from Barclays' carbon desk," he told Environmental Finance.

Redshaw Advisors has a core team of just four but has already made an impact on voters, winning three gongs.

Meanwhile, in the weather risk markets, it was also another strong year for Endurance Global Weather, which was voted Best Weather Risk Dealer/Structurer across all four geographic regions, repeating last year's strong performance.

This market is not impacted by policy in the way that carbon or RECs markets are, but it is on course for a record year of volumes as it continues to attract capital from mainstream investors searching for investments that are uncorrelated to other markets.

Overall, we are proud to say that we had more than 1,000 votes cast in this year's Rankings, which is itself an indicator of the levels of activity in the markets and the support of our readers. EF

Companies were emailed in October and asked to nominate the leading banks, brokers and service providers in emissions markets, weather and catastrophe risk and renewable energy finance, via an online survey. Voters were asked to vote only in those categories in which they had direct experience and to make their judgments on the basis of: efficiency and speed of transaction; reliability; innovation; quality of information and service provided; and influence on the market, not just the volume of transactions handled. More than 1,000 completed responses were received. Only one vote per company site was allowed and those firms that nominated themselves had their votes disregarded.