The European Commission in March launched an ambitious action plan it hopes will catapult the European Union (EU) into the position of global leader for sustainable finance. Nick Roumpis reports

This blueprint for sustainability intends to build on the momentum created by the Paris Agreement, and mobilise private capital to help meet EU's targets to cut greenhouse gas (GHG) emissions by 40% by 2030 from 1990 levels, and raise the share of renewables in final energy consumption to at least 27%. To achieve the EU's climate targets, additional funding of €180 billion ($223.9 billion) per year is needed, and the Commission launched the action plan to lay the ground for the financial sector to help fill this gap.

According to data from the European Investment Bank (EIB), this number rises to €270 billion per year if wider environmental goals for the energy, transport, water and waste sectors are taken into account. But the action plan goes beyond climate considerations. By promoting sustainability more broadly, the Commission wants to address social issues, like inequality, inclusiveness, labour relations and job creation.

It has identified an opportunity to show global leadership on climate change, following the decision of the United States to withdraw from the Paris Agreement. At the same time, the Commission believes that embedding sustainability into its financial system will ensure the long-term competitiveness of the bloc, putting it at the vanguard of countries taking action on climate and other sustainability issues, thereby helping futureproof its economy.

The Commission said that integrating sustainability considerations will mitigate the impact of natural disasters as well as environmental and social issues that can affect the financial markets. The action plan took into consideration the recommendations of the High-Level Expert Group on Sustainable Finance (HLEG), which was set up by the Commission in December 2016 and published its final report earlier this year.

HLEG's main recommendations have been included in the action plan. Flavia Micilotta, executive director of European sustainable investment forum Eurosif and member of the HLEG, told Environmental Finance she was pleased that the Commission took HLEG's report into account and added that "it will help put Europe at the forefront with regards to sustainable finance". The key features of the action plan include: 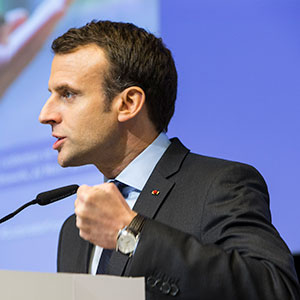 The action plan was praised by high-profile figures, such as French President Emmanuel Macron and Michael Bloomberg, billionaire founder of Bloomberg and UN special envoy for climate action, at a conference in Brussels to launch the action plan.

Macron said: "We are moving towards [climate change that] is going to be irreversible. [To avoid that], it presupposes a massive change in private investment and public policy. "I am expressing France's full support for the European Commission's initiative. We have to change the scale of our activities, and we need a path toward these environmental objectives."

Bloomberg highlighted the big contrast between the US government's policies and the actions of domestic business leaders. He said: "The headlines out of Washington don't reflect what is happening on the ground. Washington is out of sync with the rest of the world.

"If any CEO of a US company said climate change is a hoax he would be fired, because companies can't afford to ignore climate risks."

Of the numerous goals in the action plan, taxonomy is the lynchpin. According to the Commission, it is the building block for the development of financial product standards, sustainable benchmarks and EU labels, while it is complementary to both private and public investment and policies.

Answering a question posed by Environmental Finance, Valdis Dombrovskis, vice-President of the European Commission, said: "One issue, which is probably not politically controversial, but it's quite complicated technically is setting up the EU taxonomy system. "We see it as a complex start ... but when we have it in place, then other actions can branch off the taxonomy. Then you can apply labels, you can apply the green supporting factor and you can provide clarity in terms of fiduciary duty."

However, the exact format of the taxonomy is still unknown. A technical expert working group to shape the taxonomy is currently being formed and will comprise 30 members from the public and private sectors.

One of the group's tasks will be to prepare a report providing objective criteria to define and establish "a first taxonomy". The group will meet up to 15 times during 2018 and 2019.

The EU taxonomy is expected to be put forward in the third quarter next year. Initially, the taxonomy will focus on climate change mitigation, and at a later stage, it will be expanded to climate change adaptation and other environmental issues.

After the implementation of a unified EU taxonomy, the next step – according to the action plan – will be to use this taxonomy to guide the integration of sustainability into the management of financial institutions, such as banks, insurance companies and pension funds.

Sustainability benchmarks are a good example of where the taxonomy can shape policy and investment decisions. There is currently no standard or agreed definition as to what constitutes a sustainable fund or index. The Commission's view is that 'mainstream' benchmarks, which have been traditionally used as a reference point for investors and to guide asset allocation, reflect sustainability "only to a limited degree", and as such "they are not appropriate to measure sustainable investments".

Yet sustainability benchmarks, which were developed as a response to traditional methodologies, "lack transparency" – according to the Commission – something that has affected their reliability and has failed to reduce greenwashing risks.

Diego Valiante, senior economist at the European Commission, explained that while EU experts were working on the action plan, they identified only 13 investment funds that they considered "purely low-carbon", even though numerous funds describe themselves as low carbon, demonstrating the need for a clearer methodology for sustainability benchmarking.

By the second quarter of 2018, the Commission intends to clarify the transparency of the methodologies and features of benchmarks, with the aim of publishing a report on the design and methodology of the low-carbon benchmark next year.

One controversial part of the plan, is for the Commission to assess whether lower capital requirements for green assets held by banks and insurance companies could be adopted to encourage more investment. But central bankers have warned that plans to lower capital requirements for green assets would be "dangerous" because green assets are not necessarily less risky. They caution that changing the regulation would create conflicts of interests and, ultimately, could jeopardise financial stability. There are other policy tools, such as subsidies or incentives, that are better suited to encourage green investments, they counsel.

The Commission insists that it has not yet made up its mind about whether to press ahead with the proposals for a green supporting factor. Valiante said: "We are committing to gather as much evidence as possible on the impact of sustainability consideration of risk in the long term. "If this evidence points at a long-term risk on the balance sheets of banks, we will act on prudential requirements, probably starting on specific categories of sustainable assets and perhaps on other areas if necessary."

Dombrovskis conceded: "Green does not necessarily mean risk-free." In the third quarter of 2018, the Commission will invite the European Insurance and Occupational Pensions Authority (EIOPA) to provide an opinion on the impact of prudential rules for insurance companies on sustainable investments, with a particular focus on climate change mitigation. 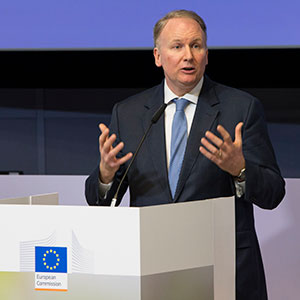 "We need patience because returns from these technologies will fluctuate, and we can't immediately withdraw just because there is a setback."

He cited a story about a CEO of a company, who normally has two speeches in his pocket, one for the analysts and one for its employees and policy makers. The speech to be used in front of analysts contains financial figures and facts for the company's performance. The other speech is about the big challenges that the planet and the society faces.

"It is sad that these two speeches are not connected," Thimann said.

While widely welcomed, the action plan was also met with critical voices, who said it doesn't go far enough. Jose Manuel Entrecanales, CEO of infrastructure and renewable energy company Acciona, expressed his concern that the action plan does not do more to help greenfield renewables investors. He told the conference in Brussels: "An enormous investment is necessary, and the investment requires a very simple formula, which moves private investment – risk and return."

He argued that this consideration is missing from the action plan, adding that Europe is competing with the rest of the world for potential investments and "it is not ranking very high, to be honest."

"Do not forget the greenfield investors, because we are a key element," he concluded.

Thomas Leysen, chairman of Belgian bank KBC and recycling group Umicore, told Environmental Finance: "I was struck by the fact that energy efficiency hardly gets mentioned in the action plan. I don't have any ready-made solutions, but I think we really have to talk between the finance and construction sector and the Commission about what we could do to accelerate there, because this is an area that is not flying."

And Nils Bolmstrand, CEO of Nordea Asset Management, said he was worried that the EU's plan would lead to too much regulation.

"I think that rigid legislation runs the risk of making it [the action plan] a 'tick-thebox' exercise, instead of being a dynamic business-led development," he said.

Jean-Claude Juncker, President of the European Commission, said: "I would like to see the financial sector supporting the planet. The clock is ticking faster and we probably need about four planets in order to keep our current lifestyle and the way we produce and consume.