Nearly 400 delegates attended the conference, now in its ninth year

Anna Breman, chief economist at Swedish bank Swedbank, expects central banks will – perhaps in the next economic downturn – "move in that direction", even if they are not currently openly supportive of the concept.

Green QE is the "most controversial" and "most discussed" tool of central banks to green the financial system, Breman said.

The term Green QE is normally used to describe central banks using their balance sheets to buy green assets, such as investments in energy efficiency or renewables. This could include green bonds.

Given the large balance sheets that central banks have accumulated over the years, "just the potential of green QE is likely to cause repricing in the markets", she added.

"I think the green QE issue is here to stay," Breman concluded. "We might not see them saying they will do green QE, but they will still act."

FTSE Russell revealed that in July it will launch what it believes to be the first sovereign bond index to specifically integrate climate risk considerations.

He said the objectives of the Climate WGBI are threefold: "The index aims to achieve a meaningful reduction in greenhouse gas emissions, retain replicability, and minimise tracking error and turnover." 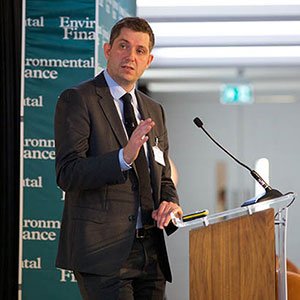 There is currently a lack of products in the sovereign bond market that take climate risk into account, he argued, despite sovereign issuers facing a significant amount of risk, which is likely to impact their finances.

30% of the market value of the WGBI will not mature for at least 10 years. Modelling by FTSE Russell and US non-profit organisation Climate Interactive suggests there will be a dramatic rise in transition risks after 2030. 15% of coupons from the WGBI are due to be paid after 2030.

The methodology for the index saw FTSE Russell score the countries in the WGBI for transition risk, physical risk and resilience. These scores were used to tilt the index away from the WGBI.

Backtesting suggests that a US dollar version of the Climate WGBI has outperformed the WGBI since 2002, returning 4.8% annually versus 4.7% for the conventional index.

Allianz GI on engaging with sovereigns

Allianz Global Investors said that engagement with sovereign issuers of debt on environmental, social and governance (ESG) issues is difficult.

"When looking at sovereigns, the challenging aspect is to find reliable data, especially on the environmental side," said Nicolas Jaquier, a strategist for emerging market debt at Allianz GI.

Jaquier said the lack of available data can make engaging with these issuers difficult, "but that doesn't mean we shouldn't do it".

Investors might try to influence sovereigns by contacting the country's ministry of finance, Jaquier said, adding that this could provide a good opportunity to positively influence government strategy on environmental issues. 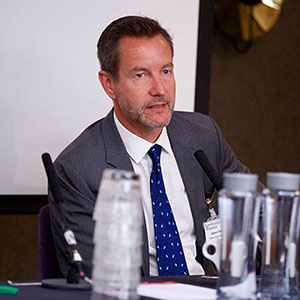 Graham Stock, a partner and senior sovereign strategist for emerging markets at BlueBay Asset Management, speaking on the same panel, said investors could also look to other parts of government to improve management of ESG risks.

"For example, last year we met with Argentina's agriculture ministry because of the way they were planning [tax changes that were] going to fall particularly hard on the agriculture sector.

"We met opposition politicians, trade unions, various stakeholders... However, this was mainly to try and build out a picture of the social and governance factors, because the environmental [risk] plays out over a much longer time period, and often beyond the time frame of a financial investment," Stock said.

Ian Horn, senior credit analyst at Muzinich, told the audience that, to engage effectively on ESG issues with bond issuers, bondholders must in most cases engage collectively.

Other ways issuers might be more incentivised to listen to individual investor engagement include when the book of prospective buyers is smaller: "Maybe on a high-yield deal, or an issuer in a sector that doesn't get as much coverage among investors," he said.

"For example, we invest in CPI Property Group, which first came to the market about two years ago. We paid Sustainalytics to deliver a report within three months on CPI... They came back and said the company didn't look great [in ESG terms] compared to their peers.

"We said to CPI's management: 'We want to own more of your bonds, but we can't do that unless you do something about some of the issues in this report'.

"Six months later they released their first sustainability report... their Sustainalytics score got upgraded, and we were comfortable with investing more in them," said Horn.

Niamh Whooley, senior vice president and ESG engagement analyst, warned that the growth of SDG bonds was at risk of faltering without better reporting on the sustainable outcomes of these bonds.

"There is a certain level of reticence towards expanding [SDG bonds] because of a fear of SDG-washing," said Whooley.

The Taskforce on Climate-related Financial Disclosures has boosted the reporting of climate-related risks by companies, Whooley argued, and a framework to promote consistent reporting on the development goals could prove equally effective. 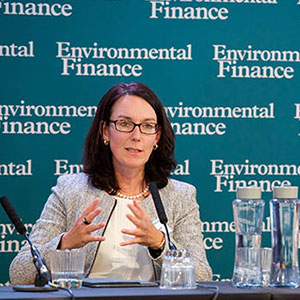 Bonds issued by German development bank KfW appear to trade at a slight premium to their vanilla counterparts, the conference heard.

A secondary market green bond curve of euro-denominated issues from KfW "trades though" its conventional or vanilla euro curve, according to research by KfW (see slide).

Petra Wehlert, head of capital markets at KfW, said the pricing differential could be caused by strong demand for its green labelled paper, adding: "Everybody is interested in green bonds!"

She said she was reluctant to suggest that green bonds trade long-term through their conventional curve.

"Long term, that remains to be seen because, when I talk to investors in general, it's not the assumption that green bonds trade tighter than conventional bonds," she said, adding that the credit risk is the same.

The findings must be interpreted with care, as the curves are not directly comparable, she said. For example, KfW's green bond issues tend to have a smaller size – of €1 ($1.1 billion) to €2 billion – whereas its conventional bonds are typically in the €3 billion to €5 billion range.

Robert Vielhaber, director of sustainability bond origination at UniCredit Bank, said the difference between the two curves is small, and that "the yield levels are very compressed in the first place." 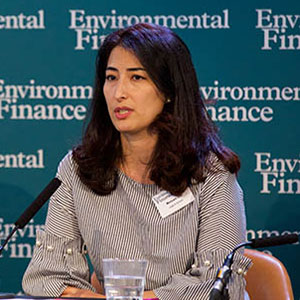 Investors would welcome bonds that help finance the growth of sustainable palm oil, according to Meryam Omi, head of sustainability at Legal & General Investment Management (LGIM).

Omi, who has met with palm oil producers as part of LGIM's efforts to increase the transparency in the supply chain, was keen to counter the perception that being sustainable necessarily brings exorbitant extra costs, and suggested that investors consider calling for specific bonds to build in evidence of good practice.

"Specific bonds or types of investment that showcase good practice might not be the only solution we need, but it's a solution we need now to show that actually, we can offer affordable palm oil," she said.

AXA Investment Managers' Yo Takatsuki triggered a lively discussion about the need for a transition bond label to help the green bond market reach out to companies in transition without losing its credibility. See full story here.

Central banks 'to turn to green QE' (with video)

LGIM calls for bonds to back sustainable palm oil

Engaging with sovereigns on ESG issues is a challenge, says Allianz