Around the globe each year, ten trillion gallons of storm water pollution – a combination of rainwater, oil grease, heavy metals, pesticides and raw sewage – wash off city streets into lakes, rivers and oceans. It is the fastest growing source of water pollution worldwide.

Many US cities never planned to deal with the volume of storm water they now face. The systems, in some cases designed in the 1800s, have reached or exceeded their useful life, and often rely on antiquated technology, which combines raw sewage and storm water—commonly referred to as combined sewers—that overflow directly into rivers and streams during large rainstorms. Updating these systems (e.g. sewer separation or underground storage) is often cost prohibitive or simply not technically feasible. It is not uncommon to find pipes spewing sewage into water adjacent to some of the most expensive real estate in the world, such as the west side of Manhattan or in the Georgetown neighbourhood of Washington, DC.

And even if a city completely eliminates its combined sewer overflows, separated sewer systems send untreated, polluted storm water directly into rivers and streams causing habitat destruction and stream bank erosion, which can lead to flooding, among other issues.

Urban growth brings more concrete, brick, cement, and other impervious surfaces that generate storm water run-off. Further, storm water run-off is a Federally-regulated pollutant under the US Clean Water Act, requiring many cities—often through Federal consent decrees—to upgrade systems in order to come into compliance. Combine more run-off with systems in need of repair and municipal budget shortfalls, and one can imagine how challenging it is to slow or stop this massive pollution source.

Washington, DC is one of many cities failing to meet the Federal standards. The city's sewer system, which is comprised of both combined and separated systems, is one of the nation's oldest, with construction having begun over 200 years ago.

The aging system is incapable of dealing with moderate rainfall today – the result – up to three billion gallons of run-off and sewage flow each year into the Potomac and Anacostia rivers that border the city and run into the Chesapeake Bay. This severely degrades drinking water quality and habitat of the Chesapeake Bay — placing at risk a regional economy built on recreational and commercial fishing and tourism.

In an effort to mitigate storm water run-off at its source, Washington, DC has instituted a first-of-its-kind Storm water Retention Credit (SRC) trading programme as part of an update to its building codes and Federal water quality permitting regime in 2013. The rule changes require all new real estate development and major redevelopment projects to manage storm water — effectively keeping the water out of the municipal system.

Developers have the option to build storm water management facilities 100% onsite or meet district-wide storm water retention requirements by a combination of onsite facilities and the purchase of SRC credits. Credits are generated by storm water retention projects elsewhere in the district. All credits are certified by the district government and cleared through an online, public registry. It is the first example of a private-to-private storm water trading market in the country—and mimics many of the features seen in carbon and renewable energy credit markets.

City green spaces are proven methods for absorbing rainfall and preventing run-off. Expanding green space, swales, and other nature-based infrastructure not only reduces storm water and localised flooding, but adds job opportunities to build and maintain these sites and can often deliver lower-cost solutions than 'grey infrastructure', such as underground tunnels and retention basins.

Knowing this, the district government created guidance in the 2013 rule to allow for green spaces that are engineered to capture run-off — commonly referred to as green infrastructure — to be acceptable forms of credit generation. This marriage of green space and infrastructure adds other benefits for communities such as increased open space, community greening, greater property values and improved air quality. 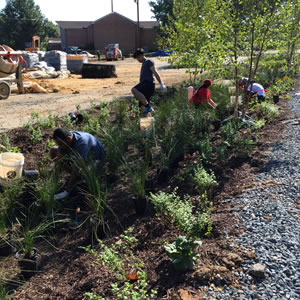 Through an investment from Prudential Financial, The Nature Conservancy's impact investing unit, NatureVest, has collaborated with Encourage Capital to establish and capitalise District Storm Water LLC, which funds, develops, and manages SRC-generating projects.

The partners in the company saw the need for a professional credit developer and counterparty to regulated real estate projects. Without an entity dedicated to producing high-quality, reliable supply for the market, the market would never get off the ground.

The company works with landowners and community groups to develop credit-generating projects in parts of the district that would most benefit from green infrastructure, while creating liquid, cost-competitive credits for sale in the SRC market.

Using this market as a tool to drive investment in low-cost, high-impact storm water management projects will reduce the impact of storm water pollution on local rivers and the Chesapeake Bay, transform communities through increased green space, and inspire conservation-minded people as they see the benefits of nature in their communities.

A market for storm water mitigation is a highly scalable and replicable concept. However, developing the infrastructure to facilitate these new markets is not straightforward and could be costly, especially if they are developed on a city-by-city basis and need to consider city- or watershed-specific circumstances.

Creating a modular certification programme for the creation and tracking of storm water pollution reduction credits, which can be used and adopted by cities and watersheds across the country, would provide a ready-made and affordable solution to this major concern. This will require cooperation among municipalities, their state and regional regulators, and Federal lawmakers — but it can be done.

[A national scheme] would unleash a major private investment opportunity for a variety of financial products, services, and new business opportunities to take advantage of these new standards

And, if done correctly, it would also unleash a major private investment opportunity for a variety of financial products, services, and new business opportunities to take advantage of these new standards.

While ecological impacts will vary from watershed to watershed, investors, municipalities and community stakeholders will have the national standards needed to advance new projects. The next 20 years will be crucial as cities continue to grow – attracting new businesses and residents, while needing to provide reliable, safe infrastructure.

Craig Holland, director of product development with NatureVest, an initiative of The Nature Conservancy