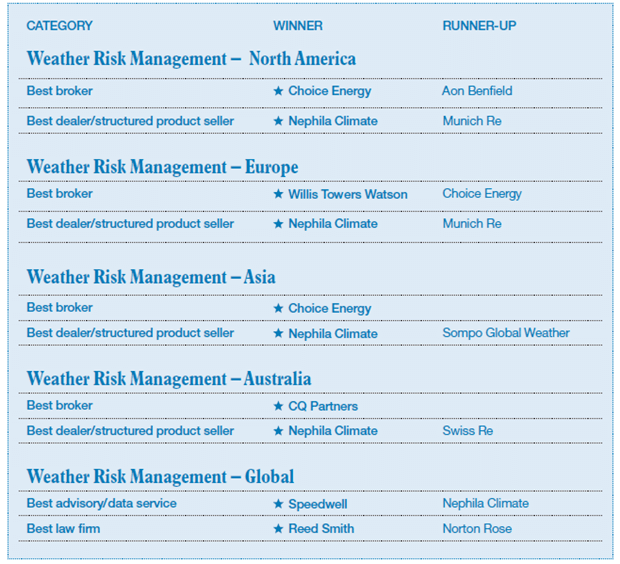 Corporate demand for protection against weather risk has shown healthy growth in the past 12 months, as predicted by the winners of last year’s Market Rankings.

More and more companies are examining their exposure to climate-related risks as a result of the recommendations of the Task Force on Climate-related Financial Disclosures (TCFD), credit rating agencies and other bodies, says Barney Schauble, managing partner at Nephila Advisors and chairman of the newly formed division Nephila Climate. The San Francisco-based company was voted Best Dealer/Structured Product Seller in all four regions covered in our annual poll.

These initiatives are encouraging companies to attempt to quantify their climate and weather risk. Then they start to ask “what can we do operationally to manage that risk and what can we do financially for things that cannot be dealt with operationally?” says Schauble.

There’s “a growing awareness of climate change, and that is helping this market,” agrees David Whitehead, co-CEO at Speedwell Weather, which retained its title as Best Advisory/Data Service. “Climate change is here and we’re all seeing the impact … but at least there’s a tool to help manage that risk.”

“The market is very healthy now compared with a couple of years ago,” says Nicholas Ernst, director of weather markets at Choice Energy, which held on to its title of Best Broker in the North American Market.

“We’re seeing a lot more large deals.” That’s been the main trend of the year – “larger, more bespoke deals and the market has more volume,” he says. This is the result of a greater willingness to transact by end users along with better product offerings and more flexibility from protection sellers, he explains.

Claire Wilkinson, managing director, alternative risk transfer solutions, at Willis Towers Watson, voted Best Broker in the European market, agrees: “There’s been lots of demand and no shortage of capacity”. “It’s certainly been a good year for us,” she adds.

But, cautions Nephila’s Schauble, “it feels to us there are fewer people offering protection, or those that do are offering less”. This is perhaps not surprising as many providers of weather protection are reinsurers who have been badly affected by natural disasters in the past two years.

Their capacity “depends on their exposure to the 2017 hurricane season and Californian wildfires,” says Brown at Reed Smith. Alternative investment funds are still quite active, he adds, but can’t provide the same size deals as reinsurers. 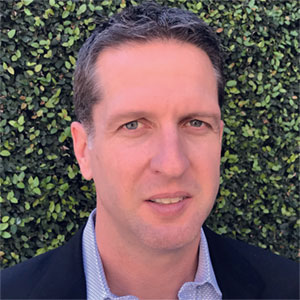 Nephila underlined its own commitment to the weather market by rebranding its existing weather team as a dedicated new division – Nephila Climate – in January.

The firm’s weather business had grown significantly since its 2005 launch as a small fund that invested in insurance-linked securities, so “we felt it made sense to brand the weather activity with its own name and logo, etc.” says Schauble.

“We wanted to make it clear to the world that we were not just trading weather derivatives on the CME (Chicago Mercantile Exchange) and buying cat[astrophe] bonds.”

“While we have a very large cat business, we also want to be a leader in the climate business,” and day-to-day exposure to climate risk is very different from the risk of natural disasters, he notes.

Rebranding the team also seemed a natural response to the growing demand for climate resilience – with investors seeking climate friendly investments and corporate clients wanting protection against weather or climate risk. “There’s obviously growing sensitivity to climate risk, increasing disclosure of that risk, quantifying it and thinking about how to transfer the risk.”

The new division has already claimed some notable achievements in rolling out innovative weather risk products into new markets. A good example is a set of ‘proxy revenue swaps’ for two solar projects in Australia. The two five-year transactions will protect the new solar projects’ revenues from the financial risks associated with uncertain production volume, timing of energy generation and future energy prices.

"We've had 5,000 unique pricing requests since the [weatherXchange] service was launched about 12 months ago"
- David Whitehead, Speedwell Weather

The transactions were executed by Nephila Climate in association with Allianz Global Corporate & Specialty’s alternative risk transfer unit, and mark the first application of proxy revenue swaps to solar projects. Previously, the innovative hedging product had been restricted to wind projects, mostly in the US.

The growing importance of the renewable energy sector in the weather hedging market is confirmed by Speedwell, which has recently launched a series of proprietary wind production indexes for various regions and clients across Europe, Australia and the US.

To generate the indexes, the company used gridded data and three-dimensional modelling techniques to derive wind speeds at turbine hub-height and then used the turbines’ specific ‘power curves’ to model their energy output.

All the indexes – designed specifically to facilitate the transfer of weather risk – were “client driven” and represent “a highlight of the past year,” says Whitehead.

Although temperature-based trades still predominate in the weather risk market, “there’s definitely a growing interest in wind products,” notes Ernst at Choice Energy. The reason, he suggests, is that as the wind energy market matures, owners are increasingly looking to optimise the performance of their assets.

Energy companies – both traditional and renewables-based - remain the single biggest category of end user, agrees Nephila’s Schauble, but “we are doing more business with the ag[ricultural] sector” and have also executed some transactions for water utilities and construction companies.

Many speak of construction as the next big sector, says Wilkinson. But, she cautions: “I think it is harder in this sector to develop an index that works for a particular project.” The risks vary by location, by type of project and by the timing of the project schedule. Excess rainfall, extreme temperatures and high winds can all delay project completion, and the challenge is to develop an index which properly captures the best combination of these factors”.

Furthermore, she adds, a lot of construction contracts include ‘forcemajeure’ clauses, which can shift the weather risk from one party to another and these can complicate matters.

Among other industries interested in the benefits of weather hedging, Schauble mentions enquiries from retailers and airlines, while Whitehead notes that users of Speedwell’s weatherXchange platform now include water companies, winter clothing companies, salad producers and ski resorts, as well as the more predictable energy companies and insurance brokers.

The growth of this service, which gives users access to weather data and free structuring tools to help them design suitable hedges, is the company’s second highlight of the past year, he says.

A key development of the platform was the introduction of instantaneous indicative pricing, which means an end user can input details of the protection they want and their request is immediately sent to six protection sellers – Axa, Nephila, Sompo, Guaranteed Weather, Coriolis Capital and Munich Re.

Price quotes are generated automatically and returned to the prospective buyer within 30 seconds – all for no charge. Previously, this process could take up to two weeks, says Whitehead. A seventh seller is expected to join the service early in 2019. Price quotes can now be obtained for a huge range of weather variables, he notes – from temperatures in London to snowfall in the Andes.

“We’ve had 5,000 unique pricing requests since the service was launched about 12 months ago,” he says, proudly.

Sometimes, however, weather data alone is not sufficient to provide the level of protection end users require.

Last year’s devastating hurricanes – Harvey, Irma and Maria – have prompted a number of enquiries “from clients in those regions asking what they can do to protect themselves from similar events,” says Wilkinson.

Businesses such as hotels and tourist attractions are likely to be covered by conventional insurance policies against flood and storm damage to property but are now looking for protection against broader impacts, such as declining visitor numbers, even if they have suffered no direct damage.

In response, “the market is becoming more creative,” she says. For example, a weather index may be used as the primary trigger in a contract, but the settlement may be based on another parameter, such as footfall or hotel occupancy rates.

Some would like to have payouts determined solely by these other criteria and are looking to other data sources to see whether they can be used as reference indexes. But, at present, there is push-back from many insurers who prefer to include some reference to a weather index, as the weather data comes from an independent external source, has been measured for a long time, and is robust.

“We’re trying to develop solutions that best match the risk of our clients,” Wilkinson says. “Part of what we do is to help clients better understand the exposure they have and then translate that need into something that can be delivered by way of an index which can be underwritten”.

There’s a huge amount of demand for a very wide range of things, she notes.

Nephila’s Schauble agrees: “We think there’s more and more interest in the products we offer.”

And recent market growth bodes well for the future, as Whitehead at Speedwell describes weather risk protection as “a sticky product”, meaning levels of repeat business are high.

“We’re very excited,” concludes Schauble. “Not just about next year but about the next 5-10 years in this space.”