As Environmental Finance's Market Rankings celebrates its 20th anniversary, its winners are reaping the rewards of foresight. Peter Cripps reports

It has been 20 years since Environmental Finance started conducting its annual surveys of the environmental markets.

The Market Rankings were set up in 2000 to assess sentiment and identify the best performing companies operating in tradeable, environmentally-themed markets.

20 years on, much has changed. Dozens of countries have some form of emissions trading scheme and many more have plans to implement one. Even if the prices at which allowances currently trade are typically not high enough to cause drastic changes in corporate behaviour, this sends a clear signal that governments are increasingly seeing the need to put a price on carbon. 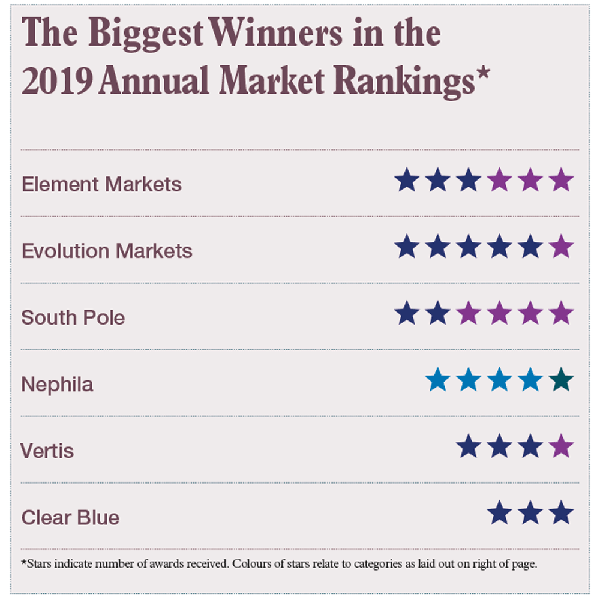 The carbon markets are, on the whole, seeing sentiment strengthen due to policy interventions, such as efforts to address the oversupply of allowances in the EU emissions trading system. But politics still has the potential to undermine markets, as can be seen in the Western Climate Initiative, where the US federal government has lodged a legal challenge on the linkage between the carbon markets of California and Quebec.

Another big change over the past two decades can be seen in the weather itself. As noted by participants in both the weather and catastrophe risk markets, incidents of extreme and costly weather events and climate-related natural catastrophes are increasing.

The spate of incidents in 2017 and 2018 have had an impact. As can be seen in the arena of sustainable finance more broadly, investors are increasingly aware of the impacts of climate change and its potential to hit their returns.

Investors who got their fingers burned in the catastrophe bond market after numerous bonds were impaired are now demanding higher yields to compensate them for the risks.

Companies were emailed in October and
asked to nominate the leading traders,brokers and service providers in the markets covering carbon emissions, renewable energy certificates, and weather and catastrophe risk, via an online survey. They were asked to vote only in those categories in which they had direct experience and to make their judgements on the basis of: efficiency and speed of transaction;reliability; innovation; quality of information and services provided; and influence on the market, not just the volume of transactions
handled. More than 850 completed responses were received. Only one vote per company site was allowed and those firms that nominated themselves had their votes disregarded.

Corporates, too, are increasingly waking up to the risks and opportunities arising from climate change. Many, including those signed up to the RE100 initiative, are now sourcing green electricity in a trend that is boosting the market for renewable energy certificates.

And the push by the Task Force on Climate-related Financial Disclosures for companies to report the risks and opportunities their business faces as a result of climate change is driving some to look to the weather risk market.

In short, the impacts of climate change are becoming increasingly evident and the need to address greenhouse gases increasingly urgent. The markets designed to help address these problems are enjoying growing support, from regulators, investors and business.

The focus on these themes will only grow. The companies that are leading in these markets now are well positioned to lead in the future. Many of these firms – for example, South Pole, Evolution Markets, Element Markets, Baker McKenzie and Nephila – have already built up years of experience.

My congratulations to all of this year's winners – I am sure they can look forward to decades of success to come. EF