Major environmental markets saw healthy growth in activity in 2018 and the winners of our annual Market Rankings see plenty of reasons for optimism about next year.

Most of the winners in this year’s Market Rankings are entering 2019 with a spring in their step, buoyed by favourable regulatory changes and growing voluntary engagement by large corporates.

“Market sentiment has been good,” says Steffen Koehler, chief operating officer at Germany’s EEX exchange, referring to the EU Emissions Trading System – the world’s largest carbon market. He attributes this optimism mainly to “comprehensive policy reform” designed to tackle the imbalances in supply and demand for emission allowances which have dogged the market for the past decade.

In anticipation of tighter supply, EU Allowance prices have soared above €20 from below €4.5 in the past 18 months. 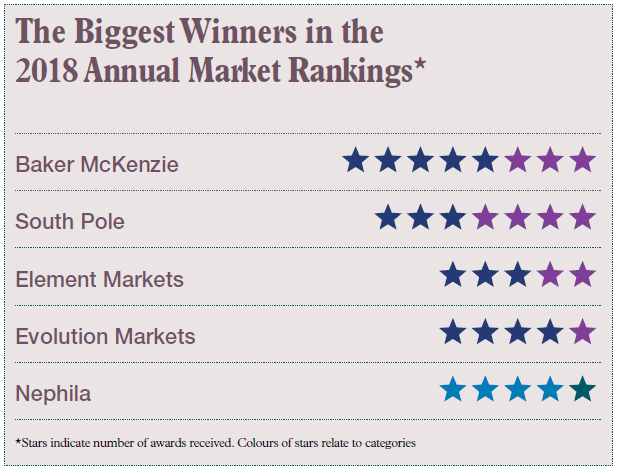 Other carbon markets have had more mixed fortunes, although it was a “fantastic year” for the Regional Greenhouse Gas Initiative (RGGI) in the north-eastern US, says Randy Lack, chief marketing officer at Element Markets.

The other mandatory North American market, which combines California and Quebec, suffered a blow in July when Ontario pulled out of the programme. However, the market has largely shrugged off this setback.  “It shows on a longer-term basis that linkage and de-linkage is possible and the markets are flexible,” says Nicolas Girod, managing director of markets at advisory firm ClearBlue Markets.

Meanwhile, in the renewable energy markets, volatility has been the name of the game due largely to oversupply in mandatory US markets and unusual weather in Europe. Higher state targets for supplies of renewable power should help restore balance in the US markets next year and regulatory changes are also expected to boost European demand for renewables, industry leaders say.

Companies were emailed in October and asked to nominate the leading traders, brokers and service providers in the markets covering carbon emissions, renewable energy certificates, and weather and catastrophe risk, via an online survey. Voters were asked to vote only in those categories in which they had direct experience and to make their judgements on the basis of: efficiency and speed of transaction; reliability; innovation; quality of information and services provided; and influence on the market, not just the volume of transactions handled. More than 850 completed responses were received. Only one vote per company site was allowed and those firms that nominated themselves had their votes disregarded.

In particular, Rankings winners point to the recently revised Renewable Energy Directive (RED II), which sets a new renewable energy target for the EU for 2030 of 32%, replacing a previous target of ‘at least 27%’.

Another striking feature of 2018, which is expected to continue next year, is increasing demand from voluntary corporate buyers, particularly from the RE100 companies who aim to obtain all their electricity from renewable sources by 2030.

Related growth in corporate concern about climate-related risks has also boosted demand for weather hedging. There’s “a growing awareness of climate change, and that is helping this market,” says David Whitehead, co-CEO at advisory and data firm Speedwell Weather.

2017’s devastating hurricanes – Harvey, Irma and Maria – have prompted numerous enquiries “from clients in those regions asking what they can do to protect themselves from similar events,” notes Claire Wilkinson, managing director, alternative risk transfer solutions, at Willis Towers Watson.

And, despite many investors incurring losses as a result of these and other devastating natural disasters, more capital came into the cat bond market in 2018 and a record amount of insurance linked securities have been issued.

To go back to the awards page click here.