There is a huge need for infrastructure spending on water projects. But not all of these investments should be eligible for green bonds, argues Giulio Boccaletti 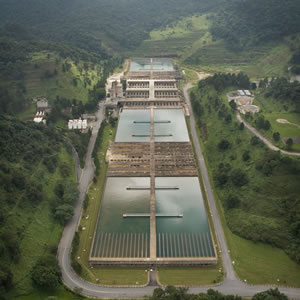 Investments in water ought to be among the highest priority for the rapidly growing green bond market.

According to a recent study by McKinsey, global water infrastructure requires more than $10 trillion of investment by 2030, making it the third largest infrastructure investment category after roads and power production.

Water investments are squarely at the heart of the sustainable growth agenda: irrigation is the most important driver of productivity improvements in agriculture, which is vital for feeding the world's rocketing population while reducing the loss of natural lands, including forests. Billions of dollars are needed for 'grey infrastructure', such as reservoirs and pipelines, and for 'natural infrastructure', such as rivers, lakes and watersheds. Much low-carbon power generation such as hydropower or concentrated solar power also depends on water infrastructure.

Meanwhile, natural water systems are the most visible victims of our unsustainable use of resources. If current usage patterns persist, by 2030 the global economy will require access to 40% more water than we are able to deliver today. Pollution and over-use, coupled with construction of unsustainable infrastructure, have led to a 75% collapse in freshwater wildlife. Perhaps even more urgently, a growing number of communities – from California and Sao Paulo, to Pakistan and China – are suffering the consequences of severe scarcity or unpredictable flash flooding.

Solving the water challenges of the planet will clearly be a significant, capital-intensive component of the sustainable global economy, and is therefore an obvious candidate for funding by green bonds. Water already accounts for about 10% of the proceeds raised from green bonds, whose total outstanding issuance is around $66 billion. It is not easy, however, to define precisely what constitutes a green bond when it comes to water.

Water investments by themselves do not guarantee a contribution to a sustainable future. Unsustainably damming a river may be a water investment that leaves in its wake biodiversity loss, community displacement and an unsustainable resource management model – hardly something that merits being called green.

Similarly, expensive water treatment and desalination as a solution to water scarcity may commit cities to energy- and carbon-intensive water production, so investments in utilities cannot by themselves be considered green solely because they produce drinking water.

Several attempts are being made to establish standards or add transparency to the market. For example, there are the Green Bond Principles (GBPs), whose members include a group of leading investors and issuers including the European Investment Bank (EIB), the World Bank and underwriters. The GBPs cover use of proceeds, processes for project evaluation and selection, management of proceeds, and reporting. Among the categories of projects deemed eligible is "sustainable water management (including clean and/or drinking water)".

The EIB and the World Bank, pioneers of green bonds, also specify that sustainable resource management and clean water and drinking water projects are eligible for green bond financing.

But what constitutes a "sustainable resource management" investment is far from obvious, and whether a clean water and drinking water project is sustainable is often unclear.

Moreover, observance of the GBPs has to date been patchy and the degree of sustainability, which should be the bonds' raison d'être, has varied greatly. For example, environmentalists have argued that the Jirau hydropower dam in Brazil, which raised finance through green bonds, should not qualify because the environmental damage the dams cause (such as excessive silting and flooding of valuable ecosystems) outweighs the environmental benefits (typically reducing greenhouse gas emissions). Given all the uncertainties, some major investors are understandably wary of green bonds.

There are, however, some criteria which go a long way towards defining true sustainability, and could potentially be used in the green bond market. An example is the Hydropower Sustainability Assessment Protocol, which was initially developed by the International Hydropower Association (IHA) and a number of NGOs including The Nature Conservancy. The protocol offers a comprehensive social and environmental evaluation of hydropower projects with metrics based on objective evidence and the results presented in a standardised way. This makes it easy for governments, civil society groups and financiers to see how well individual developed or planned projects stand up to scrutiny.

Another important indicator is the integration of natural capital in the evaluation of a water investment. The primary infrastructure on which we rely for water security is the underlying 'natural' infrastructure – rivers, lakes and groundwater – and the health and integrity of these can be defined precisely. In the development of hydropower, for example, the connectivity and integrity of rivers is a measurable outcome that can be incorporated in the development or redevelopment of a river.

On the Penobscot River in Maine, a number of hydropower dams were decommissioned, while another one was enhanced, so that almost a thousand miles of habitat were reconnected while maintaining and even expanding the generating capacity of the river.

A third criterion which can help identify sustainable investments is the complementarity of water security and ecological integrity. One example could be river infrastructure that in its design adopts the 'mitigation hierarchy' of avoiding, mitigating and offsetting impacts on nature. An example is a utility which has incorporated forests and other natural assets in managing water supply. Nairobi, for instance, has brought together utilities, farmers and community organisations to improve the quality of water in the Upper Tana River, which supplies the bulk of the city's water, by terracing cropland and planting trees, thereby reducing the run-off of silt and agricultural chemicals into the river.

Sustainable investments are clearly distinct from, and more complex than, traditional water infrastructure investments. But there is enough prima facie evidence of demand, as well as need, to merit making a serious effort to bring more rigour and clarity to the market.

In the early stages of building a market for financing water projects with green bonds, the MDBs (World Bank, Asian Development Bank, Inter-American Development Bank and so on) might have to play a role. They could help de-risk more unusual investments, lowering interest rates and creating a track record for the new asset class.

In the long run, taking the market to a more mature stage requires a large private sector benchmark issue (as distinct from one connected to a MDB) to finance an unimpeachably sustainable water project which can set the standard for the future. Such a breakthrough would bring much needed capital into sustainability, increasing awareness of precisely what sustainability means, and creating new types of investment – not least in water.