Alliance Trust put its faith in environmental, social and governance (ESG) metrics when it promoted Peter Michaelis to take charge of its equities investments, in September 2014. 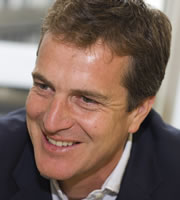 Michaelis had previously been in charge of the trust's nine Sustainable Future Funds, but was given free rein to apply his sustainability-focused methodology across the broader £2.8 billion ($4.3 billion) investment trust.

"It was definitely a vote of confidence in our Sustainable Future investment process and our ability to generate strong returns," Michaelis tells Environmental Finance. It was also a welcome shot in the arm for Michaelis and his team, which were sold to the Trust three years ago by Aviva Investors.

"Alliance Trust really wants to stand for being a leading sustainability investment house and this is all part of it," he adds.

The performance of the trust has been decent since Michaelis took over – between 30 September 2014 and 31 July 2015, its net asset value total return was 11.7%, which compares with 8.5% for the MSCI All Country World Index (ACWI), although the trust has no benchmark.

However, these are turbulent times for the Dundee, Scotland-based firm. Earlier this year, the trust was dragged into a high-profile row with New York-based activist investor Elliott Advisors, its biggest external shareholder, with a 10% stake.

Elliott slammed the lacklustre performance of the 127 year-old company in recent years, and demanded that three new directors were appointed to the board. The discount to which the trust's share price trades relative to its net asset value per share – about 12% in late August – came in for particular criticism, as did returns relative to its peers.

Although Elliott's views on the merits of ESG metrics are not clear, its letter to shareholders complained about the appointment of the new head of equities, saying that "the post was filled ... through internal promotion without advertisement ... and without canvassing shareholder views".

After a heated battle, the trust partially succumbed and allowed two of the three candidates onto the board. In return, Elliott is understood to have called a truce for a year.

But, in the meantime, Alliance Trust is under pressure to perform. Its most recent results were, by its own admission, disappointing. In the six months to the end of June, its equity portfolio gave a total return of almost 1.6%, which was below the 2.1% of the MSCI ACWI.

Michaelis blames market turmoil in June, which saw a sell-off of the bond-like stocks with which the trust was overweight. He says a strong bounce-back in July "more than made up for June", and he points to the outperformance of the trust in the 10 months since he took over as a truer picture of ESG's potential to boost returns.

However, the first-half results were accompanied by a pledge to announce further "changes" in the autumn, although further details were not provided.

Michaelis, who has been involved in sustainability themed investing for some 15 years, remains convinced that the rationale behind the ESG selection process will win through – given time.

"From October to the end of July, the trust is up on the MSCI ACWI," he points out. "But we want to be judged over three years - that's our time horizon."

"It's clearly not helpful to have criticism aired in the press," he adds. "But my view is that as long as the team is focused on delivering a strong investment performance, that's what will close the discount."

He adds that all of the Sustainable Future Funds have performed better than average for their peer group over both three and five years.

"From where we started, in 2001, when it was deemed an interesting novelty, it's now become much more accepted as a sensible investment strategy"

For example, the flagship Sustainable Future Managed Fund, which had £491.2 million of assets under management at the end of July 2015, has "performed incredibly well", he says. The fund is up 11.5% in the year to the end of July, compared with 7.3% for its Investment Association 'mixed investment' benchmark, giving it a ranking of seventh out of 131 sustainability-themed funds, according to FE Trustnet data.

Some of the Sustainable Future Funds have recently won recognition from both FE and MoneyFacts for their performance relative to other socially responsible investment funds.

"As things stand, we think things have been going pretty well in terms of the trust, and it has been going fantastically for the Sustainable Future Funds," adds Michaelis. "We have just celebrated our third anniversary of being at Alliance Trust – and what we have achieved so far is very positive."

The Sustainable Future process, as Michaelis calls it, uses four themes as a guide to stock selection:

In addition to these factors, companies must be strong businesses with attractive valuations.

Since Michaelis took over, the number of stocks has been whittled down to less than 70 to reflect the heightened conviction in the selection process.

He said there was an immediate 15% "churn" of the portfolio's holdings, with companies not deemed sustainable being dumped. One such holding was Glencore – a decision that now looks canny given the slide in the mining giant's share price over the past year.

Michaelis's belief in the sustainability agenda is only heightened by the current policy environment.

"2015 is a big year for climate change. The fact that China, the US and the EU have come out with very clear statements on the long-term trend towards weaning our economies off fossil fuels gives that much more backing to our whole idea that companies that help to solve societal and environmental problems will be the winners of the future."

And he believes that, since he started managing sustainability funds, ESG has been gradually moving into the mainstream.

"From where we started, in 2001, when it was deemed an interesting novelty, it's now become much more accepted as a sensible investment strategy. There's more and more evidence that sustainability is an important aspect of assessing investments. Our challenge is to make everyone understand it's a better investment strategy." EF