A year of regulatory changes has boosted confidence that environmental markets have a bright future, say the winners in this year's Environmental Finance annual Market Rankings 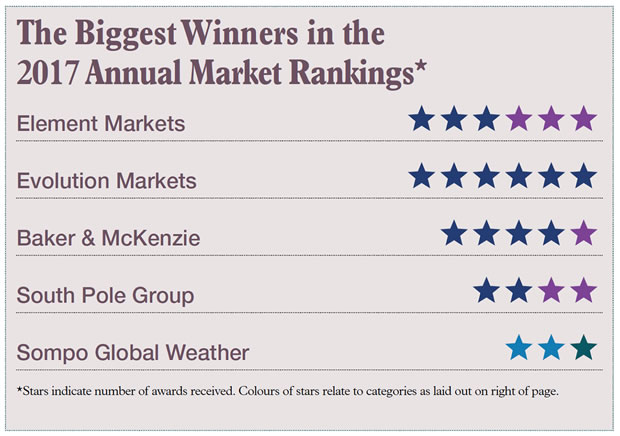 Environmental markets are entering 2018 on a tide of optimism after a year of transition dominated by regulatory reforms. Most of the winners in this year's annual Market Rankings believe these changes should lead to bigger, more robust, markets and create possibilities for expansion into new areas.

US carbon specialists are equally bullish. The outlook for the California market "is looking much more positive than it was at the beginning of the year," says Nicolas Girod, head of trading and research at ClearBlue Markets, which was voted Best Advisory/Consultancy for the North American carbon markets.

Companies were emailed in October and asked to nominate the leading traders, brokers and service providers in the markets covering carbon emissions, renewable energy certificates, and weather and catastrophe risk, via an online survey. Voters were asked to vote only in those categories in which they had direct experience and to make their judgements on the basis of: efficiency and speed of transaction; reliability; innovation; quality of information and services provided; and influence on the market, not just the volume of transactions handled. More than 850 completed responses were received. Only one vote per company site was allowed and those firms that nominated themselves had their votes disregarded.

The confident outlook is based on reforms to the structure of the EU ETS and the North American markets – California and the northeastern Regional Greenhouse Gas Initiative – that should help correct the imbalance in supply and demand for emission allowances that has prevailed for much of the past decade.

It's a similar story in the markets for renewable energy certificates.

Scott Eidson, vice-president of environmental markets at 3Degrees – voted Best Trading Company in North American Renewable Energy Certificates (RECs) – says: "We believe that voluntary and compliance markets will continue to grow in 2018 and beyond, and that several states will either extend or increase renewables mandates".

And early concerns that the Trump administration would loosen the rules governing the use of biofuels have faded, triggering a sharp rebound in the price of Renewable Identification Numbers.

Renewables are also on a roll outside the US. There has been "tremendous growth in renewable energy solutions in Asia, Africa and South America," says Marie Bluett, head of renewable portfolio management at South Pole Group, a multiple winner in this and previous years' polls.

In terms of new markets, all eyes now are on China, which launched a pilot national REC scheme in July and is due to follow up with a national carbon market in the next few weeks.

It's an equally positive story in the weather risk management market.

And, although end-users are under no obligation to participate in this market, regulatory pressures for greater disclosure of climate – related risks could still lead to an increase in activity, some major players predict.

"If you have real disclosure (of climate risks) the next step is to quantify that exposure and the financial impact. Then the next logical step is for shareholders and rating agencies etc to ask – what are you going to do about that risk,?" says Barney Schauble, managing partner at Nephila Advisors, which took the crown as Best Dealer/Structured Product Seller in North America and Asia.

The second new name among the big winners – Sompo Global Weather – is, in fact, a repeat winner, Endurance Global Weather, with a new name following its acquisition by Japanese insurer Sompo.