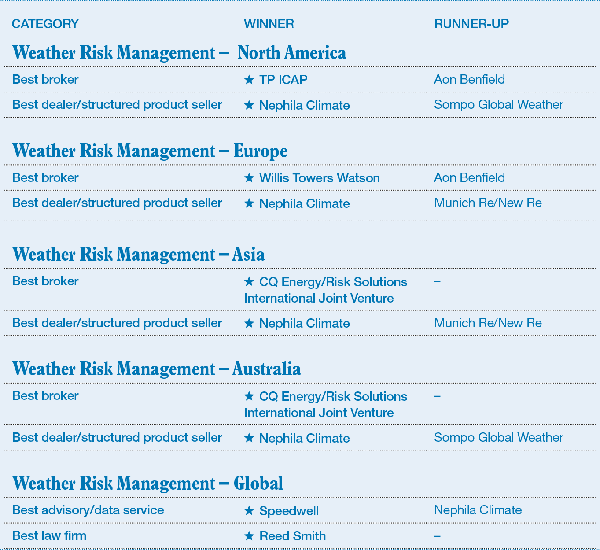 The growing pressure on companies and investors to disclose the climate-related risks they face has breathed new life into the market for weather risk protection. The trend – clearly identified in last year's Market Rankings – has strengthened throughout 2019 as scientists have beefed up their warnings, public concern has become more vocal and regulatory pressure has mounted.

"The market has evolved. It is no longer mainly weather derivatives, it is now about climate risk transfer," says Richard Oduntan, CEO of Nephila Climate, which strengthened its dominance of the Weather Risk Management category in this year's poll. The Bermuda-based firm made a clean sweep of the Best Dealer/Structured Product Seller titles across all four geographic regions. 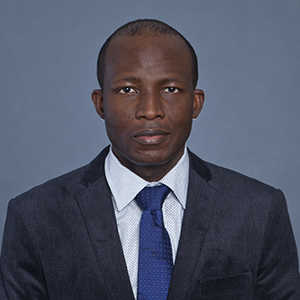 Nephila identifies three areas of opportunity arising from climate-related risks: impact investing, the energy transition, and climate resilience. It has developed new products in each of these categories.

Nephila manages investors' capital and a growing number are keen to see their investments deliver 'impact', Oduntan notes. The company's activities in this area have been mainly in the agricultural space, particularly in developing countries. One example is the African Risk Capacity (ARC) facility which offers parametric insurance cover, that will pay out to fund pre-approved contingency plans to ensure a rapid response to extreme weather events and disasters. Since 2014, ARC has paid out more than $36 million to countries affected by drought.

Outside the agricultural sector, a wide range of companies see a need to enhance their climate resilience, and Nephila offers a range of products to help them, based on a variety of weather-related variables such as temperature, wind, precipitation, and river flow. Such protection can even help facilitate mergers and acquisitions, Oduntan notes, if one of the counterparties has significant weather risk exposure.

In the energy sector, Nephila has had great success with its innovative 'proxy revenue swaps' (PRS). These instruments can effectively fix the revenue from renewable energy projects for several years and can therefore be used to protect the financing of new projects (rather than seasonal protection for existing sources of power). "This has brought us a lot more counterparties, including project sponsors and corporates interested in supporting renewable energy," says Oduntan. "It's been hugely successful."

On these and other products, Nephila frequently works in partnership with AGCS, a subsidiary of German insurer Allianz, which acts as the counterparty for PRS contracts.

Willis Towers Watson (WTW), which retained its title as Best Broker – Europe, agrees that climate risk is now the dominant influence on the weather market.

"A key driver of interest in weather risk management solutions this year has been the climate change agenda," says Claire Wilkinson, WTW managing director, alternative risk transfer solutions. Climate change "is now firmly on the agenda for many large organisations, creating an increasing awareness of weather variability and its potential financial impact" she adds.

"A second driver is the continued occurrences of natural catastrophes such as flooding, drought and record-breaking periods of extreme heat and extreme cold. This increased awareness, coupled with our drive to engage more actively with clients and colleagues on topics such as climate change and adverse weather has helped the company "gain more traction on parametric solutions globally," she says.

"In the market generally, we have also seen a number of new solutions emerge, expanding the perils that can be covered on a parametric basis", Wilkinson notes. "Examples include parametric wildfire coverage and cover based on the water level in major European rivers, which can, for example, be used by companies which rely on river barges".

Other recently developed products use new technology such as that underpinning parametric hail solutions aimed specifically at owners of car lots, but also applicable to the agricultural sector, and parametric flood solutions that respond to water levels measured at the buyer's location.

WTW also reports increased demand from the construction and renewables sectors, although parametric solutions for these remain challenging to close, Wilkinson says.

Despite WTW's global reach, the Best Broker – North America title went to TP Icap. Its success clearly stems from the hire in April of Nicholas (Nick) Ernst and his brother Eric, in April, to run a new weather derivatives desk within the firm's energy and commodities division.

Nick joined as managing director, weather markets, and Eric as a weather broker. Both previously world together at Choice Energy, which claimed the Best Broker – North America title in 2018 and 2017.

Icap, the world's largest interdealer broker, is a major player in the commodities markets but pulled out of weather risk broking several years ago. The company's strong position in the energy and power markets across the world mean the weather team 'see much more of what's going on and many more opportunities' than they did previously.

As a result, most of the team's clients are in the energy sector, and most want temperature-based hedges. However, Nick Ernst notes that the rapid growth of renewables has changed the types of weather protection required. Whereas hedging by the traditional power generators was almost entirely designed to protect against adverse weather conditions reducing demand, the boom in renewable energy has created a more complex weather risk market.

As operators of wind and solar power facilities rely on favourable weather conditions to perform as predicted, many of them are seeking protection to cover a shortfall in supply.

Another feature of modern energy markets is the rapid growth in trading of liquified natural gas, which has also created new opportunities. "We've seen temperature-based trading" in the LNG market, says Ernst. There is correlation between weather conditions and where LNG cargoes go. "We've seen some interesting knock-on effects."

Since joining Icap, Ernst has been travelling widely to the firm's offices and clients around the world and educating the broker's staff about the range of weather protection they can offer their clients. "Hopefully, we can win in other regions as well next year," he says.

In the Asian and Australian markets, however, the broker to beat is a joint venture between Australian energy advisor firm CQ Energy and Risk Solutions International. The partners also claimed the Best Broker – Australia title last year but the 2018 Asian title went to Choice Energy.

In the global weather categories of Best Law Firm and Best Advisory/Data Service, the titles were retained by repeat winners Reed Smith and Speedwell, respectively.

Reed Smith partner Claude Brown echoes the comments of Nephila's Oduntan and Wilkinson at WTW. "The weather markets have moved in with the 'sustainability market' over the past 18 months," he says.
As a result, weather is attracting more interest from investors. Specialist funds focussing on catastrophe risk have been around for several years, he notes, but now more generic funds are taking an interest in sustainability issues, including weather.

"Their methodology is increasingly including sustainability issues in general, including weather," Brown says. "But it's a slow-burn".

"Most energy companies and agricultural companies are now familiar with the product," he says. "It's no longer exotic; it's becoming mainstream."

Technological developments have helped deliver the kind of data these and other companies require. Whereas, in the past, accurate weather data was mostly based on measurements taken just above ground level at airports, gridded data, which incorporates information from satellites, weather balloons, surface observations and other sources, can provide much more relevant data for energy installations, farms and other facilities wherever they are located.

Speedwell's own technology has also helped boost the market. Its online platform weatherXchange enables brokers and corporate hedgers to get indicative price quotes for the protection they require within 30 seconds. The service was launched last year and had six protection sellers signed up by December 2018. That figure now stands at 13. "It's becoming a hub for market activity," Whitehead says.