Growing pressure on companies and investors to disclose the potential impact of climate-change could lead to more use of weather risk management contracts, some analysts believe. Graham Cooper reports

In late June, London was baking in 30oC heat. Sales of beer and barbecue equipment were going through the roof, while demand for gas heating was close to zero. Just five months earlier, however, it was a quite different story when the capital was brought to a near-standstill by freezing temperatures and a blanket of snow.

Both episodes will have an economic impact and the March storms have already been blamed by retailers and other companies for disappointing January – March profits. 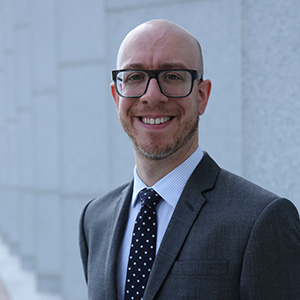 "We would have had an even better outturn for the year had several of our businesses not been forced to shut down for several days in the face of severe weather conditions in the final quarter of the year," said Tim O'Toole, outgoing CEO of transport company FirstGroup.

It will no doubt be a similar story when April – June figures are revealed. Once again, the impact of unseasonable weather will be dismissed as a 'one-off' event.

As climate scientists have been warning for many years, such 'one-off' events are becoming more frequent. Furthermore, insurance and other risk management tools to deal with unseasonal weather have long been available but, other than power generators, few companies have used them.

This is starting to change, partly in response to the Task Force on Climate-related Financial Disclosures (TCFD), analysts say.

"There has been a shift in the landscape regarding how companies, investors, and regulators view weather and climate risk," says Greg Lowe, global head of resilience and sustainability at insurance and analysis firm Aon.

A study of the impact of weather on corporate earnings by S&P Global Ratings and insurance analysts Resilience Economics, supports this view. It found that, since 2016, the topic of "weather and climate" was the most frequently discussed term in the earnings calls held by S&P 500 companies, far outstripping "Trump", "recession", "dollar" and "oil". (see chart 1) 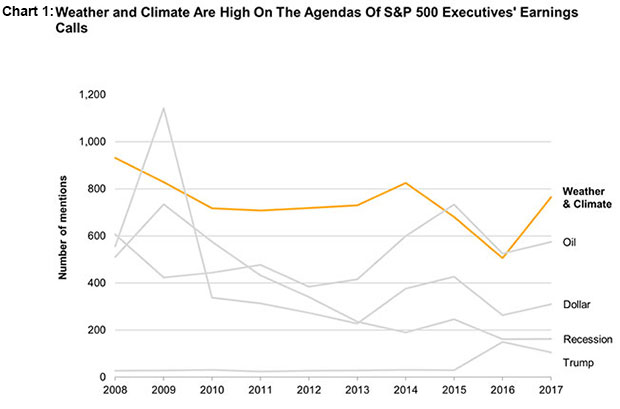 And, they note, discussions of climate risk and its effect on corporate earnings "are now reaching the CEO's office". Some 86% of all disclosures of climate-related impact on earnings were made by the CEO or CFO, they say.

"People are starting to take the TCFD recommendations seriously. There's been a definite uptick in interest regarding climate risk from our insurance and corporate clients," confirms Aon's Lowe.

In response, Aon has launched a new service to help clients evaluate the potential impact of climate risk and weather on their operations and develop strategies to manage this risk.

The Aon Weather & Climate Risk Innovation network will combine expertise from across the Aon group with data and analytics from third parties to offer a 'centre of excellence' enabling them to quantify and manage "the risks identified by the G20's Financial Stability Board recommendations on climate risk disclosure".

Although some 88% of businesses are affected by weather, use of weather risk management solutions remains fairly low, Lowe says.

As an example, he mentions the unusually cold weather that swept across the UK in late February and early March – the 'Beast from the East' – which was blamed by CEOs across many industry sectors for disappointing Q1 results.

"For how much longer are investors going to continue accepting this as an excuse?" he asks.

The new centre of excellence will aim to educate companies and local authorities about climate risks and how they can be dealt with.

Another priority, Lowe says, will be 'closing the protection gap' – trying to find ways to protect underinsured infrastructure assets such as roads, pipelines and rail lines.

The S&P/Resilience Economics study found that 73 companies in the S&P 500 publicly disclosed an impact on earnings from weather events in 2017, but only 18 quantified it. The average materiality on earnings for those that did quantify the impact was "a significant 6%" the analysts note.

"Climate risk is a surprisingly prevalent topic of discussion for the CEOs of publicly traded companies, and management teams are becoming increasingly accountable for understanding and mitigating the impact of climate risk," they conclude.

But, like Aon, they note that CEOs often cite climate and weather as a risk factor beyond management control.

And they agree that the TCFD is one driver for quantifying the impact of weather as its proposed framework includes disclosure of the aspects of an organisation's financial performance that may be affected by "extreme temperature changes affecting organisations' premises, operations, supply chain, transport needs, and employee safety".

"As management teams become more accountable for understanding the financial impact of weather events, we expect to see more companies increase reporting on this issue," says Mike Wilkins, managing director and head of sustainable finance, corporate and infrastructure ratings, at S&P Global Ratings, one of the authors.

With more than 250 companies having already signed up to support the TCFD's recommendations, "we expect to see more reporting of the quantified impact of climate and weather in annual and quarterly financial reports and investor day presentations".

Though not explicitly called for in the TCFD recommendations, "it is expected that [companies] will quantify the impact," says Wilkins.

In a larger study looking beyond the S&P 500, the ratings agency and Resilience Economics found a total of 708 companies that disclosed a material weather impact on earnings in the 2017 financial year. Of these, 644 said the impact was negative but only 77 quantified it and only 50 disclosed monetary values that allowed the analysts to determine the materiality of the impact. The average materiality for this sample was 5%, they calculated. The other 27 quantified the impact but only in terms of company-specific metrics that could not accurately be extrapolated to sales or earnings figures.

The utilities sector had the highest level of quantification in the 2017 financial year, with 36% of the companies that blamed the weather for a negative impact on earnings quantifying the monetary impact.

This is confirmed by Swiss Re Corporate Solutions, one of the major providers of weather risk protection. "Practically all big utilities listed in the FTSE 100 and S&P 500 hedge their weather risk, with no notable exceptions," a spokesman told Environmental Finance.

Some airlines also attempt to quantify the impact of adverse weather. This sector is among the most sensitive, Wilkins said, as "any deviation from normal weather can cause lawsuits, [additional] repairs and maintenance ... passenger rebates and aborted take-offs."

The US Federal Aviation Administration estimates the cost of a one-hour delay at up to $4,500 per aircraft, plus an additional $35-$63 per passenger per hour to reflect the value of lost passenger time.

In many industries, weather can affect both the demand and supply sides of a company's operations, and exposure to climate can increase the volatility of corporate cashflows in a variety of ways. It can also hit a company's credit ratings, the S&P analysts warn.

As more and more companies endorse the TCFD's recommendations and management teams become more accountable for understanding the financial impact of weather events, "we expect to see more reporting of the quantified impact of climate and weather in annual and quarterly financial reports and investor day presentations," say the S&P analysts.

While the power generation industry is the best known user of weather risk management, because of its obvious sensitivity to fluctuations in heating and cooling demand, many other industry sectors can also see their bottom line affected by unseasonal weather.

Agriculture and the food industry is a good example and this is the main market targeted by French insurance underwriter and broker Meteo Protect.

The Paris-based company says it has seen a dramatic increase in demand for weather insurance from French winemakers this year, as a result of the damage caused by unusually cold temperatures in the spring of 2017. By 31 May, the company said it had seen a 15-fold increase in viticulturists signing up for its spring frost risk coverage.

Last year's spring frosts caused a 40% drop in output from the main wine-growing region of Bordeaux and a 17% slump in national output compared with the average of the previous five years.

"France experienced significant crop damage resulting from frost last spring, for which all insured growers who suffered losses were compensated," says Gabriel Gross, CEO of Meteo Protect. "We have seen a dramatic increase in the number of growers subscribing for parametric weather insurance and brokers who now offer our solutions to their clients. 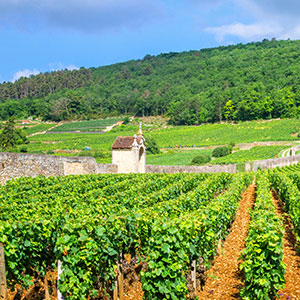 "Weather risk is increasingly significant, as the frequency of 'anomalies' has doubled in the past 15 years."

Wine is one of France's biggest exports. Yet only 15% of vineyards are insured. Indeed, traditional insurance is not well adapted to the needs of wine growers, Gross says, with expensive premiums and excessively high deductibles.

Parametric weather insurance, on the other hand, can be fully customised, with winemakers specifying the location, coverage period, and weather parameters they want covered. Meteo Protect then designs a suitable parametric contract to provide compensation for losses incurred through adverse weather conditions.

Such contracts are triggered when the chosen parameter – temperature, for example – falls below an agreed level for a certain period of time in a well-defined area. Unlike traditional insurance, indemnification is simple and automatic, requiring no field loss assessment, deductible or adjustment.