Volatile prices were observed across the traded markets featured in Environmental Finance's Market Rankings with most stabilising towards the end of this year.

In carbon markets, which look to put a price on carbon and cap emissions of greenhouse gases, EU Allowance prices began the year trading at €83 ($87) and reached record high prices of €96 in February.

After sharp drops, Michael Karavias, managing director of derivatives and structured products for Evolution Markets, said that utilities and trading houses attempted to 'move their positions into futures or reduce their holdings'.

Evolution was the joint biggest winner in this year's rankings, winning six awards covering the EU, UK, North American and Kyoto carbon markets and one award for Europe in the renewable energy certificates (RECs) market.

The price of EU allowances later recovered to €88 as of 7 December.

While recessionary signs have emerged, winners predicted this would not have the same effect on the EU's Emissions Trading System (ETS) as previous recessions have had. 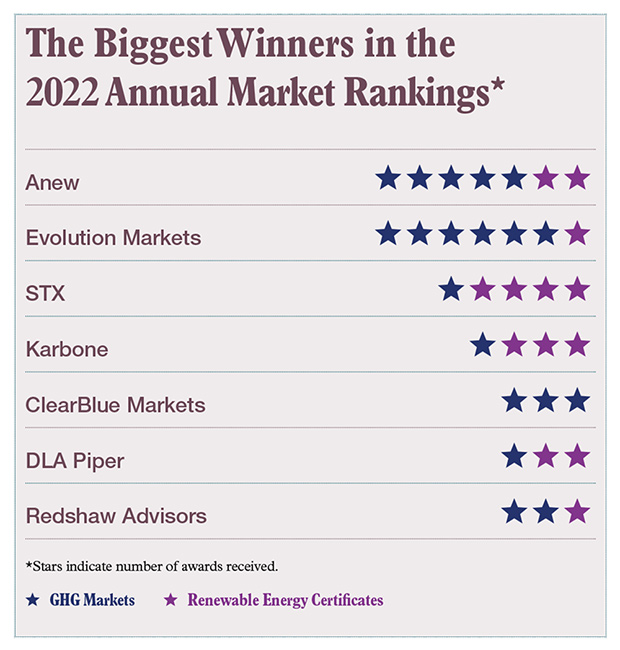 During the global financial crisis, EU allowance prices crashed to around €10 as power generators and industrial firms sold off credits because of reduced production and liquidity concerns.

North American carbon markets didn't escape the impact of the energy crisis either. Randy Lack, head of portfolio management for Anew, said: "Sentiment does bleed through from the European markets, especially on the trading side, so you see these shocks to the market that occur even from uncorrelated events".

However, after the initial 20-day shock, the markets recovered pretty quickly, he added.

Anew was the other joint biggest winner this year, winning five awards in the North American carbon markets and two awards in the RECs and Renewable Identification Numbers (RINs) markets.

Winners of this year's Market Rankings told Environmental Finance that, despite the ongoing uncertainty in many of the major carbon markets, they are cautiously optimistic for 2023.

Meanwhile, the demand for RECs mostly withstood the impact of both economic headwinds and supply constraints for renewable projects.

Compliance markets experienced more pricing resilience than voluntary markets as the latter showed sensitivity to macroeconomic factors and the overall risk appetite in the economy.

In the US, the year saw prices for compliance RECs start roughly in the low $20 range rising steadily to roughly $26 in November.

In comparison, the Green-e programme, the most widely accepted voluntary standard in the US, had a markedly different year compared with 2021.

Green-e prices remained volatile in a range of $1 per megawatt hour (MWh) to $4 per MWh at the start of the year, before stabilising to around $3 per MWh as economic headwinds retreated slightly.

In weather markets, economic pressures were also felt globally as interest rate raises directly impacted the cost of capital. However, this also fed through to an increased demand for risk transfer capital.

The environmental markets once again demonstrated a growing appetite from the private sector to galvanise climate action.

Congratulations to all this year's winners.

Companies were emailed in October and asked to nominate the leading traders, brokers and service providers in the markets covering carbon emissions, renewable energy certificates, and weather and catastrophe risk, via an online survey.

They were asked to vote only in those categories in which they had direct experience and to make their judgements on the basis of: efficiency and speed of transaction; reliability; innovation; quality of information and services provided; and influence on the market, not just the volume of transactions handled.

More than 1,000 completed responses were received. Only one vote per company site was allowed and those firms that nominated themselves had their votes disregarded.