Personality of the year: Ulf Erlandsson 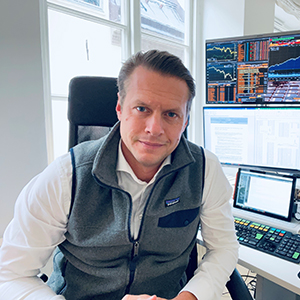 Anthropocene Fixed Income Institute (AFII) chief executive Ulf Erlandsson scooped the Personality of the year award after he initiated a novel kind of "professional activism" in the sustainable fixed income market in 2021.

The nominations praised Erlandsson for his work in both criticising financing for organisations damaging the environment as well as supporting financing for green causes – in particular, 2021 saw Erlandsson challenge several financial institutions for their inconsistent financing activities (see Box: AFII's 'professional activism' in 2021).

Erlandsson told Environmental Finance he was "quite proud" of this work, which he described as a "new sort of professional activism".

"Activism used to mean a quite dogmatic approach, insensitive to what the most impactful levers in finance are," he said. "Our contribution has been to challenge the notion that 'activists' always have outsider status, and instead show how to work with more internal factors in the system."

He said targeting sales desks at banks or the commercial clients of a custodian bank to better consider climate may sound "drab" compared to gluing yourself to the entrance of a lender, but it can be "surprisingly effective".

During 2021, AFII engaged in several 'professional activism' campaigns including:

Adani Electricity: In September, the AFII filed a complaint with the US Securities and Exchange Commission (SEC) accusing the lead managers of the $300 million Adani Electricity sustainability-linked bond (SLB) of securities fraud for not properly disclosing its links to coal mining and coal-fired power through its parent firm Adani Group. AFII argued this connection with the thermal coal sector should have been disclosed properly to the bond investors.

Japan Bank for International Cooperation (JBIC): In February, the AFII challenged HSBC and Barclays over their facilitation of a bond issued by the Japan Bank for International Cooperation (JBIC). The AFII argued the previous statements by JBIC made it clear the bond would be used to finance the Vung-Ang II coal power plant expansion. This was not clarified in the bond prospectus, however. AFII and the Environmental Defenders Office highlighted to the banks that this was a potential breach of their legal duty as well as running counter to the climate pledges made by them which included no new financing of coal projects.

SUEK: In September, AFII challenged investors and banks around the inaugural US dollar benchmark bond deal for Russian thermal coal miner SUEK. AFII argued that it undermined the credibility of the sustainability bond efforts of the banks if they also allowed themselves to run a deal funding such activities. At the time of writing, the bond is in grace period having failed to pay its first coupon on its due date

Despite this, he said that AFII – a thinktank founded in 2020 – is sometimes pigeonholed as a "trash talker" for its work in this area.

"That is unfair: we seek out inconsistencies that I would have liked to have known about when I was an investor," said Erlandsson, who initially began investing in sustainable bonds as a senior credit portfolio manager at Swedish pension fund AP4.

He said banks need to facilitate discussion between issuers and investors on these complex topics. At the moment, however, he said there has been a "tendency to fail-to-disclose instead".

"On the Adani SLB work, for example, if you are direct subsidiary of the owner of a massive new coal development, it needs to be addressed in your marketing and disclosure documents when trying to sell an SLB," he added. "If you are Barclays and HSBC looking to sell Japan Bank for International Cooperation's (JBIC) new bonds, investors that are sensitive to new coal need to be informed that JBIC just announced their commitment to build Vung-Ang II."

Erlandsson believes the sustainable bond market is facing some risks from the SLB markets if structures are too unambitious. “A depreciation of actual impact targets and ambitions would risk the strides the labelled sustainable bond market has made in general.”  On the flip-side, he said strong SLBs could offer “some of the most exciting opportunities” in sustainable finance today.

"We saw an SLB recently coming out with a target to reduce carbon emissions from business travel versus 2019 baseline numbers – that is, pre-Covid-19 travel patterns to be clear," he said. "Hardly ambitious, if I am being polite."

In 2022, Erlandsson said one of the themes AFII will focus on will be around ambitious SLB structures. In particular, he is keen to push for what he called "game-changing" SLBs – such as coal retirement mechanisms committing issuers to retire coal-fired power plants at a far faster pace than their expected lifetime.

Yet, again, he said that banks will play a key role in facilitating acceptance for such ambitious structures.

"Banks are fantastic at finding the solutions that can connect investors and issuers, but I feel that they are sometimes a bit too risk-averse when it comes to challenging investors to think new," he said.

"Let's say, that there is a new game-changing SLB for a coal retirement mechanism which would probably be one of the most carbon emissions impactful investments one could make in fixed income. But some investors are pushing back because it will be exposed to coal and they are not certain that all will go well, and that just does not align with their investment guidelines or risk mandates. In such instances, the rules and investment guidelines on the investor side need to be challenged rather than taken for fact."

Erlandsson accepts that this can sometimes be hard for banks to challenge investors when they are effectively selling to them. Nonetheless, he hopes banks will grow more confident in doing so and sees a role for AFII in supporting this process.

Overall, although the AFII plans to quicken the pace, Erlandsson said it is clear the investment landscape is changing towards climate change – investors are increasingly willing to take on more risk in financing the climate transition as it is now recognised as a 'good trade'.

He said that working to make sustainable bonds an "integral component" of this transition trend, rather than a "separate product", has been the "most intellectually stimulating work of my whole career".

Erlandsson hopes that, as sustainable bonds are now competing with fossil fuel bonds both in issuance size and fee generation for banks, the market could evolve to see participants actively abstain from fossil financing and favour sustainable bonds instead. For example, he hopes it will be in the interest of banks to tell potential investors in a green bond that they were not involved in selling a "deep fossil" bond the day before.

"Version 2.0 of sustainable bonds not only finances sustainability, but also crowds out non-sustainability," he said. "That might sound far-fetched, but in reality, it should not."