The green bond market has since its inception been dogged by concerns about 'additionality' – the question as to whether green bonds are helping to channel funds to green projects that would not otherwise have been built. 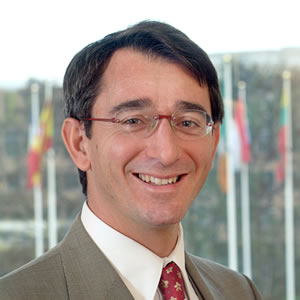 Aldo Romani, deputy head of euro funding at the European Investment Bank (EIB), has been wrestling with this problem more energetically than most. His efforts were clearly appreciated by the investor judges of Environmental Finance's green bond awards, which voted him Personality of the Year.

Romani has been passionate about the green bond market, ever since he was involved in structuring the issuance of the first ever green bond, labelled a 'Climate Awareness Bond', from the EIB in 2007.

His enthusiasm for the market shone through earlier this year at a sustainable finance conference in Paris, when an NGO speaking on a panel accused the green bond market of lacking the additionality needed to meet the Paris climate goals, saying: "You can't shoot for the moon in a hot air balloon!"

From his seat in the audience, Romani stood up and leapt to the market's defence, arguing that the aim of the European Commission to develop an EU-wide taxonomy on sustainability could help address the question of additionality.

"When somebody talks of hot air in the green bond market, I have to think of all the nights I have spent with colleagues to bring things forward, finding out at all times that science is a matter of interpretation as far as green is concerned," he tells Environmental Finance. "And we do not have the instruments to define the additionality in the first place, so it's currently impossible to measure it.

"Green bonds have been adding to the capacity of the market to assess with a high degree of confidence what is happening in underlying green activities. They are the opposite of greenwashing because they have created the possibility to ask questions regarding the underlying activities."

He adds that scaling up the volume of green bond issuance should be the "intermediate objective of policymakers in order to create the conditions for the ultimate goal, which is clarification of what needs to be added" in order to green the economy.

Romani and his colleagues at the EIB have worked hard on the issue of additionality in recent months, particularly on developing a green taxonomy, which Romani believes lies at the heart of the problem.

He has spearheaded an initiative between the EIB and the Green Finance Committee (GFC) of the China Society for Finance and Banking to develop a "Rosetta Stone", or common language, of green finance.

Following a series of roundtables and market consultation, at COP23 in Bonn a paper was launched called The need for a common language in Green Finance, which outlines the initial findings. It compares the eligibility criteria of the People's Bank of China, the EIB's Climate Awareness Bonds, and Multilateral Development Banks – International Development Finance Club (MDB-IDFC) Common Principles for Climate Mitigation Finance Tracking standards.

The paper combines the varying climate mitigation activities eligible under these three standards into a universal list. And it suggests a classification methodology, or matrix, in which these activities can be cross-referenced against policy objectives. This matrix could be populated by a set of internationally comparable indicators, as suggested by a G20 report into green finance.

Standards could be derived from this matrix, by specifying which activities and policy objectives are eligible.

"We have a variety of approaches and what we need is a framework," argues Romani.

The findings of the paper fed into the work of the EU's High-Level Expert Group on Sustainable Finance, on which the EIB's Eila Kreivi was an observer.

The EIB has recommended that the European Commission presses ahead with designing such a matrix and uses it to distil its own standard, which can be applied to green bonds and other products. The Commission, for its part, has called for a technical working group to be set up to explore the creation of a sustainability taxonomy, which is at the heart of its Action Plan for Sustainable Finance.

Romani is also feeding this work into the Green Bond Principles working group on green eligible projects, of which the EIB is co-chair.

Romani admits that the work of creating a taxonomy of green activities is only a step along the road towards defining additionality. But there is no doubting his enthusiasm to help tackle the challenges ahead.