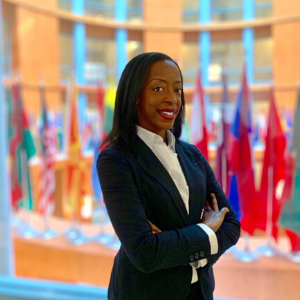 Esohe Denise Odaro, head of investor relations at the International Finance Corporation (IFC), has been an integral figure in the development of the green, social and sustainability bond market in recent years.

One of the awards judges who voted for her to be named Personality of the Year commented: "Her expertise and passion for the impact bond space has been a key factor in its rapid development.

"It is easy to say that, without her tireless advocacy and willingness to work with investors, the market would not be in anywhere near its current position."

The IFC led the green bond market's first $1 billion transaction in 2013. From this moment, Odaro has been continuously campaigning for new entrants to the market.

She explains: "My position has always been: 'How do you become a green investor if you are not given [the opportunity to have] a foray into participating in those products?' At the IFC we've gone from meeting investors who are in many ways reluctant to [take part in] this programme, to a point where if you meet an investor what they want to talk about first and foremost is thematic bonds.

"This is a consequence of the work we have done to educate investors about the product and the ensuing opportunity we have offered them to invest in green bonds."

Odaro has been a member of the executive committee of the Green Bond Principles from its inception in 2014.

She recalls a moment at the end of 2014, when she was in a taxi with a green bond investor, returning from a Global Impact Investing Network conference, trying to understand exactly what investors want to see in impact reporting. The resulting information became the springboard from which Odaro, the IFC, and collaborators at the African Development Bank Group, European Investment Bank, and World Bank, made an early attempt to build a framework on which to harmonise impact reporting.

In 2015, this resulted in the first Harmonised Framework for Impact Reporting, which, through its various iterations, has had a profound impact on reporting in the market.

In 2018, when Odaro started a one-year assignment within ICMA, the Secretariat for the Green Bond Principles, she contributed to the G20 Sustainable Finance Synthesis Report and led the authoring of key industry documents including 'Working Towards a Harmonised Framework for Impact Reporting for Social Bonds' and 'Guidelines for Green, Social and Sustainability Bond External Reviews'.

Around the same time, Odaro structured the IFC's Social Bond Programme. Since its beginning in 2017, it has offered investors an opportunity to allocate investments attached to the success of certain UN Sustainable Development Goals (SDGs) without any additional credit risk than that of the IFC itself, which is rated AAA by Standard and Poor's and Moody's.

In March 2020, the IFC priced its largest ever social bond, raising $1 billion. Within the first hour of the books opening, the three-year bond, which has a coupon of 0.5%, had hit its target, ultimately ending up three and a half times oversubscribed.

The proceeds will finance access to essential services for the underserved in emerging markets.

Over the last year Odaro has also been focused on how best to align impact-based (green, social, sustainability) bonds with achieving the UN SDGs. She is anticipating greater alignment with the goals over the next year, as well as better impact reporting, as well as with the EU's taxonomy of sustainable activities.

Looking forward, Odaro says: "My key message is that I am a firm believer that the future of finance is sustainable finance. I do believe that at some point reliable access to the bond market would necessitate an ESG-related tag.

"There's still work to be done, although we've made a huge amount of progress when we look back over the last seven years to where we are today. What continues to be fundamental is maintaining integrity in the market and demonstrating the additionality of these products to naysayers."
Odaro is also a mentor of emerging figures in the sustainability space. One of her protégés, Sophie Peeters, the youngest member of the IFC funding team, was awarded an SRI '30 under 30' award in 2019.