Inaugurated earlier this year the Parc Eolien Taiba N'Diaye (PETN) is a 158.7MW wind power project in Senegal that will offset approximately 6 million tonnes of carbon dioxide over its lifespan as well as increase the country's electricity output by 15%. 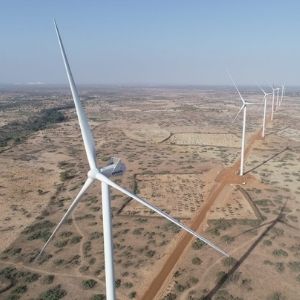 The $330 million project was funded with an equity investment from Lekela Power, a joint venture between Actis (60%) and Mainstream Renewable Power (40%), along with debt.

Senegal also suffers from some of the most expensive electricity in the world with prices of approximately $0.3/kWh. With a tariff equivalent to $0.11/kWh PETN will also address some of this cost while providing electricity to two million people for at least the next 20 years.

PETN is highlighted by the government's programme to accelerate economic development, called 'Plan Senegal Emergent' and was used by the IFC during its 2019 annual conference in Dakar to demonstrate how sustainable livelihoods in the local community can be created through power projects.

To ensure that significant socio-economic objectives are achieved an investment programme was also started that will invest up to up to $20 million in Taiba N'Diaye, the region where PETN is based, throughout the lifespan of the project.