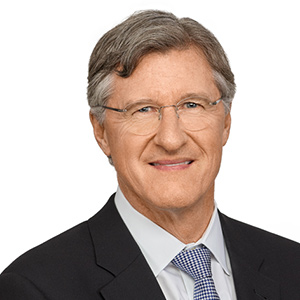 Impact data will "replace" ESG data by the middle of the decade, believes John Streur who has been President and CEO of Washington, DC-based Calvert Research and Management, for nearly six years.

The company traces its roots to Calvert Investments, which was founded in 1976 and was the first to launch a socially responsible mutual fund that avoided investment in companies that did business in apartheid-era South Africa. It is one of most well established and respected asset managers in the US focused on responsible investment.

Streur is also a director on the board of Calvert Impact Capital, a charity that sells 'impact notes' and invests the proceeds in impact projects.

In April 2019, he joined the eight-person Leadership Council of the Impact-Weighted Global Accounts Initiative, which seeks to drive the creation of financial accounts that reflect a company's financial, social and environmental performance.

The mission of the Impact-Weighted Accounts Project at Harvard Business School, under the leadership of Professor George Serafeim, is to drive the creation of financial accounts that reflect a company's financial, social, and environmental performance.

As part of the council, John is responsible for creating accounting statements that transparently capture the impact that companies have on society and the environment.

The council intends to create a methodology adopted and widely used by investors and companies when making business decisions. The Project is part of a broader Impact-Weighted Accounts Initiative (IWAI), which is a research-led joint effort by the  Global Steering Group (GSG) and the Impact Management Project (IMP).

Calvert, explains Streur, is helping to peer-review the data being produced by the initiative.

With the help of initiatives such as this, Streur feels that impact investing will become just as widely adopted as integrating environmental, social and governance (ESG) concerns now are.

"The IWAI is a necessary step to really make impact central to investment decision making and capital management decisions," he says. "We have spent all this time making ESG mainstream. The next step is to measure and quantify the impact of corporate operations and products.

"As that information becomes available, that will essentially replace the ESG information that is in the marketplace today. It's much more relevant."

He believes that impact measurement and analysis will have replaced ESG by the middle of the decade.

The bulk of ESG data, he argues, is input-oriented, for example looking at a company's policies or how many women they employ, whereas the impact data IWAI is looking to develop is output-oriented.

"It's so critical that we produce that data to provide a new language that can be easily used in economic terms.

"Once we have that information set, it will become part of the capital market mentality to think about a company's impact on the overall system.

"It will drive long-term value for investors. It will be about stabilising the system and enhancing your ability to get a return on your investments. And there can be no question that the system needs to be strengthened!"

One judge said: "Calvert is a true leader in impact and sustainable investment, which John has helped drive in his role as CEO.

"Additionally, the Harvard Business School's Impact Weighted Accounts Initiative has the potential to deliver a genuinely systemic change in finance, which John has great leverage in as one of an eight-person strong team."

Other achievements in recent months that impressed the judges include a successful engagement with Walmart over its sales of firearms. Two weeks after a gunman killed 22 people in a Walmart in El Paso, Texas in 2019, Streur wrote to Walmart's chairman, Gregory Penner, advising the retailer that restricting gun sales would be consistent with Walmart's growing commitment to ESG practices, and could boost its stock price.

Penner followed Streur's advice – shortly after Walmart announced that it would stop selling assault rifle bullets and would ask customers to conceal weapons while shopping, even in states that allow open carry.