"Working in large financial institutions means you don't really see the reality of the things you're working on" said Eliza Macmillan-Scott, sustainable finance associate at Systemiq. But this changed for the winner of the Rising Star under 30 award, when her previous role at BlackRock took her to Greece, still reeling from the Global Financial Crisis. 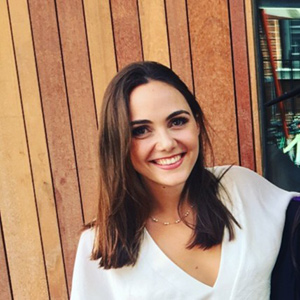 Working with public financial institutions, still feeling the impact of the crisis half a decade on showed her "the real world effects. It suddenly felt a lot more tangible" she said.

This experience was similarly felt when her BlackRock team in New York began working on the Covid-19 economic recovery. She explained "Again, even though it was a very different setting, I could see clearly how financial markets were interacting with everyday realities".

"It made me start to think more about the philosophy of the economy and whether our economic system actually supports what we need for human wellbeing" Macmillan-Scott said. It was at this point, she explained, that all the problems she had been researching converged in the climate crisis.

"The way the economy was failing on all different issues was interlinked with the way we've totally overshot planetary boundaries" she explained.

It led her to join climate advisory firm Systemiq in May 2021, where she said she connected with its understanding that "there's no one silver bullet, but instead a multitude of different pressure and tipping points and some system-level dynamics that need to be taken into account".

After helping design and launch Beyond Net Zero, one of the world's largest climate technology funds, Macmillan Scott's work this year has largely focused on the 'just' energy transition in South Africa.

This has included shaping the agenda for discussions at high-level gatherings such as the World Economic Forum and COP26. By bringing together leaders from the public, private and philanthropic sectors to identify and overcome potential hurdles, Systemiq said she was pivotal in ensuring integrity around high-level funding pledges.

For Macmillan-Scott, this work has been "extremely eye-opening" not only on the challenges of multilateral negotiation but also on the scale of considerations which need to be taken into account.

"You need to think more about the challenges, whether that's jobs, household dependents or health impacts. It's difficult because sometimes these things don't necessarily have a financial value associated with them" she said, adding "it's about people and livelihoods in a way that's much more tangible".

While she explained this makes it much more rewarding, it is also "much easier to despair". Rather than optimistically looking at emerging technologies and innovations, instead "it's coming from a place where you're seeing the full picture, you're actually considering the things we – as a global financial system - are still getting wrong".

It can also be extremely frustrating, she explained, "because people find it quite easy to leave these things out of the conversation when it gets hard". She added "These are much tougher problems that require so many more stakeholders to get anywhere".

Despite this, Macmillan-Scott hopes the impact of the work in South Africa can extend to other countries designing and negotiating climate finance mechanisms, especially Indonesia where Systemiq has its second largest office. Her team said she has leveraged these opportunities with senior global leaders to advocate for greater amounts of capital and further accountability in these processes.

Macmillan-Scott was keen to emphasise that this was a team effort but she said "it's rewarding to be recognised for the work that's gone into this" through the award.

"I'm most proud of bringing visibility to the things we need to do better. It's not just calling people out for the sake of it but instead bringing together people who usually don't sit around the same table, to have a genuine opportunity to work together," she said.