Gordon Bennett, managing director of utility markets at Intercontinental Exchange (ICE) has won the Sustainable business leader of the year award for his work in easing the process of 'carbon hedging'. 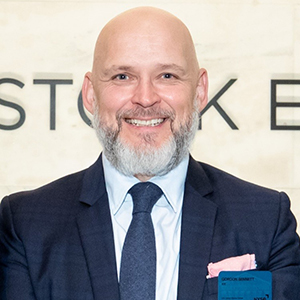 Bennett has been recognised for his role in scaling up the compliant carbon markets by helping to spearhead two trading contracts in a boost to the green energy transition.

The contracts were developed as "hedging tools" for companies and investors to grapple with the rising cost of carbon, as oil and gas is phased out in favour of renewable energy.

Earlier this year, ICE launched a contract connected to emission trading schemes (ETS) – government-run 'cap-and-trade' schemes that limit corporate greenhouse gas (GHG) emissions. Permits must be obtained per unit of emissions, either from the government or through trade with other firms, and surrendered for each tonne of emissions. ICE developed the Global Carbon Futures Index contracts to facilitate this process.

A 'futures contract' is a marketplace instrument for parties to agree to buy or sell a specific amount of a commodity at an agreed-upon price, regardless of what it currently trades at in the market, at a predetermined expiration date. The most traded commodity future contract is crude oil, but Bennett hopes this will be replaced by environmental commodities in the near future.

Commenting on the global carbon index, Bennett said: "It is basically an aggregate of four carbon allowance futures contracts. So that's the EU, UK, California and RGGI (Regional Greenhouse Gas Initiative) emission trading schemes. It gives us an index of the performance of those four cap-and-trade schemes."

"It is an interesting product but, at the moment in energy and environmental markets, it's quite difficult to get people to focus on new initiatives. Because, there's all sorts of geopolitical issues at play – like the massive supply disruption on Russian gas. Talking to people about newer products is extremely hard."

Bennett told Environmental Finance: "The objective of the [global carbon index futures] contract is to provide an easier way to access cap-and-trade programmes pricing through one financially settled instrument, because the futures for the cap-and-trade programmes are all physically delivered. It was made to reduce the barrier to entry, but also be an efficient way to store the value of carbon which could be used for portfolio managers who wanted to diversify their portfolio or use it like an energy transition portfolio hedge."

The nature-based contract was designed to measure nature's carbon storage capabilities, in order to scale the value and popularity of 'natural capital' finance. Bennett said that investment in carbon sinks will be integral to balancing the world’s finite net zero carbon budget and nothing competes with nature based solutions in terms of speed, scale and cost, in climate mitigation terms.

Bennett commented: "The nature-based credits have been more successful. We’re planning some really exciting auctions for major developers this year – we announced Permian Global late last year and just announced GreenTrees – and we've got a great pipeline of developers with a few more that are nearly ready to announce.”

"The carbon credit market is chasing the futures market almost before the underlying market has developed ... to bring credits to market in a more transparent way, that allows us to institutionalise the issuance of primary credits and bring top-quality developers and a group of buyers on board.

"Companies that are not mandated by governments to compensate for the emissions are effectively being mandated by consumers and investors now."