Impact report of the year (for issuers): IFC 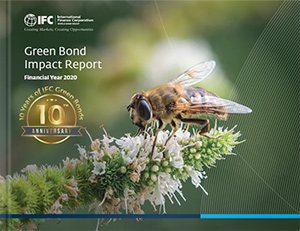 The International Finance Corporation (IFC)'s decade of experience in impact reporting shone through in 2020, with judges hailing its latest work as the "gold standard of impact reporting".

The IFC, part of the World Bank Group, celebrated the 10th anniversary of its first green bond last year. Its first deal in April 2010 raised $200 million in a 'green' private placement.

The green bond programme, which had raised a total of about $10 billion by the end of 2020 according to Environmental Finance's bond database, "has been transformative in setting precedents in benchmark issuance, currency diversification, and impact reporting," according to the issuer's latest impact report.

The projects are expected to reduce greenhouse gas emissions by 3.4 million metric tons of carbon dioxide-equivalent (CO₂e) per year; equivalent to CO₂ emissions from 387 million gallons of gasoline consumed, the IFC said.

Each $1,000 invested in the bonds is expected to reduce GHG emissions by 2.8 metric tons of CO₂e each year and produce 4.2 MWh of renewable energy per year, the IFC said.