Preventing deforestation can yield numerous social as well as environmental benefits. Many governments have therefore taken action to protect their forests, but it is widely acknowledged that their efforts are inadequate and that substantial private finance will be required. 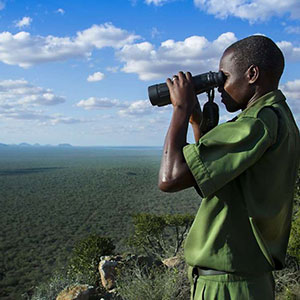 A major step forward in this effort came in October 2016 when the International Finance Corporation (IFC) issued an innovative bond to support a project in the Kasigau Corridor of east Kenya.

This Wildlife Works project is one of the largest to have been approved under the UN's REDD+ (reducing emissions from deforestation and forest degradation) programme. It enables thousands of rural farmers to benefit from a voluntary agreement to protect an important migration corridor for endangered elephants.

The five-year bond pays a coupon of 1.546%. It was originally sized between $75 million and $150 million but was increased to $152 million in response to strong demand. Buyers included US teachers' pension fund giants CalSTRS and TIAA-CREF, QBE Insurance and emerging markets investor Treehouse Investments.

A key feature of the bond is that investors can choose to have the coupon paid in cash, or in carbon credits, or a combination of the two. Investors who opt to receive the REDD+ credits can either retire them to offset their carbon footprint or sell them in the voluntary offset market.

All the credits have been approved by the Verified Carbon Standard and the Climate, Community & Biodiversity Alliance.

Another innovative feature is a $12 million 'price support mechanism' from mining giant BHP Billiton which ensures that the project can sell a minimum quantity of carbon credits every year until the bond matures. "If investors choose cash, then BHP takes the credits, thereby ensuring that the project gets an assured minimum revenue every year for the next five years," explained Vikram Widge, head of IFC climate finance and policy.

"Our support for the bond is part of our commitment to scale-up private sector investment in REDD+, stimulate demand for REDD+ credits and demonstrate the value of reducing deforestation as one of the most cost-effective climate change solutions," said Fiona Wild, BHP vice president for sustainability and climate change.

Deforestation and forest degradation account for about 20% of global greenhouse gas (GHG) emissions and the issuers estimate that the bond will facilitate the sequestration of 11.8 million tonnes of carbon dioxide over its life. In addition, the sale of the REDD+ credits will provide revenues for wildlife conservation, jobs for women and other benefits for local communities.

The bond originated from a June 2014 request for proposals from BHP for projects to support its REDD strategy. This led to the IFC contacting the company to discuss the possibility of a carbon-linked bond, which the IFC had been exploring for some time. The idea was then developed over several months with the support of NGO Conservation International and law firm Baker & McKenzie.

"This is only the beginning," said Widge. "We are confident that this innovative instrument will serve as a viable model … allowing others to replicate similar investments."

The World Bank estimates that between $75 billion and $300 billion will have to be invested over the next decade to reduce deforestation by 50%.

Looking beyond the bond

To build on the success of the forest bond, BHP, CI and Baker & McKenzie have launched a Finance for Forests (F4F) initiative, to encourage similar investments or other innovative financial instruments that help channel investment into forest conservation.

The venture will include a knowledge-sharing platform for governments, companies, institutional investors, donors and civil society to share the lessons learned from BHP's experience and explore how to overcome obstacles to financing forest protection.  Its initial corporate targets will be major emitting industries such as oil, gas, mining and aviation. Opportunities to broaden the work to other ecosystems will also be explored.