Europe has dominated the rapid growth in solar power for most of the past decade but, in the past two years, the balance of power has swung decisively toward Asia.

China, for example, installed 12 GW of new photovoltaic (PV) generation capacity in 2014, and in March it set a target of 17.5GW for this year. That stands in stark contrast to Germany, which installed less than 2GW last year and Italy, where new capacity slumped to just 385MW last year. The US, by comparison, introduced 7.3GW of new PV capacity last year.

It is therefore no surprise that financing for China's solar industry in 2013 – estimated at $23.5 billion – was equivalent to the entire amount raised in Europe, according to a report from the China New Energy Chamber of Commerce.

China still lags Germany in terms of total installed PV capacity, however, with about 14% of the total, compared with Germany's 25%.

A breakthrough transaction in November last year should facilitate China's spectacular growth by removing some of the risk facing investors in solar projects, say specialists at reinsurance giant Swiss Re.

In November, the company provided Chinese firm Alltrust Property Insurance with a hedging contract to help protect the power generation revenues of Alltrust's client, Golden Concord Holdings Limited (GCL), against adverse weather conditions. It is claimed to be the first solar energy hedge in China. 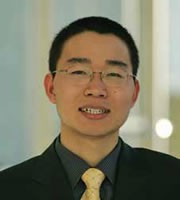 Hong Kong-listed GCL is China's largest non-state owned power producer and the hedge was applied to one of its solar plants at Huocheng, in Xinjiang province in northwest China, says Yuanyong Long, originator of weather and energy products with Swiss Re Corporate Solutions, the reinsurer's commercial insurance division.

The contract, which is initially due to last for one year, pays the plant operator in periods of low sunshine to compensate for the loss of revenue from power sales.

Fluctuating levels of sunshine can threaten the ability of PV plants to pay back their loans and jeopardise the return to investors.

"Financing and protection for investors has been one of the main obstacles to the development of China's PV market," said GCL in a statement. The transaction "will enhance the PV project's security, stability and continuity of its generating capacity … and effectively protect the banks, shareholders and creditors."

Swiss Re was unable to reveal the cost of the contract, due to non-disclosure agreements, but said it is based on a solar radiation index derived from measurements of irradiation provided by a third party, which combines ground-level measurements and satellite data.

As a result of using a weather index to determine when a payout is due, no onsite loss assessment is required and therefore payouts can be made quickly, the insurer notes.

By transferring this weather risk to an insurer, solar radiation index products can help solar plants to access investment and loans, and thus contribute to the development of the industry, it said.

Since the first deal for GCL, the reinsurer has completed two other similar transactions, again via Alltrust, but for different clients. It declines to identify them, but notes that it usually works with plants ranging in size from 30MW to 100MW.

These insurance transactions for the solar sector follow a string of other pioneering weather hedges developed by Swiss Re for Chinese clients, with a variety of local insurance partners.

In 2011, for example, it partnered with Dinghe Property Insurance on China's first insurance contract based on a rainfall index, for Guangdong Meiyan Hydropower. It has also sold a range of insurance products that pay out if temperatures over a certain period exceed, or fall below, a specified level, and, in 2013, it worked with Alltrust to launch China's first wind power index insurance product.

Weather risk represents a major risk for renewables companies, which has to be disclosed in the risk disclaimers in corporate prospectuses or credit rating reports, notes Swiss Re. The lack of effective measures to mitigate such exposure can undermine corporate credit ratings and investors' confidence, it adds.

But other sectors are also exposed, and similar tailor-made products are now being offered to agriculture, tourism and construction companies. EF