Environmental Finance: South Africa wants 42% of all new electricity generation between 2010 and 2030 to come from renewable sources – what does this mean in terms of investment requirements?

According to the Department of Energy, the 42% target means 17.8GW of renewable power by 2030, of which around 8.5GW will come from solar PV, the same amount from wind energy and about 1GW from concentrated PV.

Projects amounting to about 3.5GW have been successful in the three bidding rounds of the Renewable Energy Independent Power Producer Procurement (REIPPP) programme held so far, at an average cost of around $2 million /MW.

This means there is about $20-30 billion of investment yet to come.

EF: What role will Standard Bank play in delivering this goal? 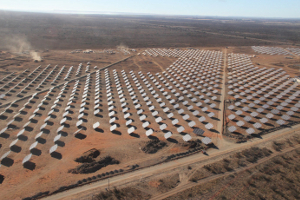 We are active in advising, arranging finance for and funding projects under the REIPPP programme and renewables projects currently represent a third of our project finance energy portfolio.

We have a financing line of R20 billion ($1.85 billion) with the Industrial and Commercial Bank of China (ICBC), our largest shareholder, to support such projects. We are underwriting R9.4 billion for 11 successful projects in the first round of REIPPP, with an installed capacity of 338MW of wind and 235MW of solar PV.

In the second REIPPP round, we supported five of the 19 successful bids, representing an installed renewable energy capacity of 328 MW and a total financing requirement of R6.1 billion.

We frequently partner with other companies on particular projects. For example, in February, we signed an agreement with GE to supply $350 million to finance distributed power infrastructure in ten African countries.

The bank has also recently strengthened its team by appointing Rentia van Tonder as head of renewable energy, power and infrastructure, based in Johannesburg . She joins the bank from the Industrial Development Corporation of South Africa , a state-owned development finance institution, where she was head of the green industries special business unit.

EF: How is the market changing?

There will also be a more active market in refinancing in future.

The first two bidding rounds (in December 2011 and September 2012) were dominated by independent developers who relied on traditional project finance, but the third round, which is not yet complete, was dominated by larger companies and utilities. Many of these intend to finance the projects on their balance sheet but some now have so many projects they may, in future, need external funding.

The reverse auction system used in the bidding rounds is working as intended (except for the timetable) and the tariffs are coming down in successive bidding rounds. It's a good story so far in terms of policy certainty.

We have been pleasantly surprised by how much appetite there is in South Africa for renewables assets. Indeed, there is no shortage of investment opportunities for any investors who are comfortable with Rand risk.

EF: Which other countries offer the best opportunities for renewable energy finance in Africa?

In terms of project finance for renewable energy outside of South Africa, Standard Bank has had most success in Kenya, notably for wind and small hydro schemes. Like much of East Africa, Kenya also has potential for bioenergy from sugar cane waste. The bank has also been involved in renewables projects in several other sub-Saharan nations, including Angola, Ghana and Nigeria.

In addition to new renewables projects, there are also many large hydro projects across Africa that were built in the 1950s and 60s that need repairing. These, too, will need financing.

EF: Does the carbon market still have a role to play in financing clean energy in Africa?

For much of Africa, renewable energy is an infrastructure story rather than a climate change issue, although the Clean Development Mechanism has certainly helped raise awareness of the need for low-carbon energy.  As the price of carbon credits has fallen so much in recent years, carbon finance is no longer relevant for utility-scale projects. However, we are coming up with funding structures for small-scale projects such as energy efficiency, solar water heaters and cookstoves that still involve carbon finance.

A few projects are getting a reliable price from sovereign off-take agreements or the voluntary market for carbon offsets, but they are few and far between.