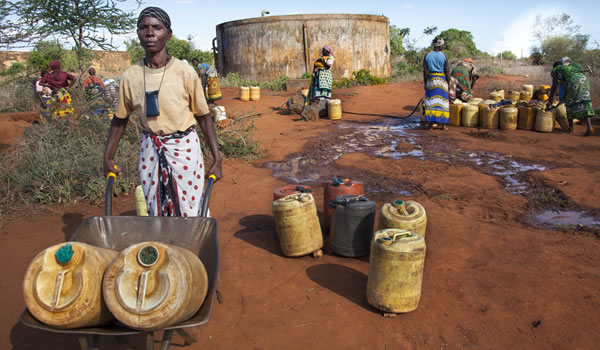 The voluntary carbon market has come a long way in recent years. For today's corporate purchaser, the climate change impact of their investment in carbon offsets is only the start of the story. Equally as important are the co-benefits offered by emission reduction projects, whether in biodiversity protection, water availability, better health outcomes or job creation.

"Most buyers in the voluntary market are coming from a corporate responsibility starting point, and they want their offset purchases to make a meaningful contribution to their corporate social responsibility programme," says Jochen Gassner, an executive board member at First Climate, a Frankfurt-based carbon neutral and water service provider. "However, a carbon reduction is relatively intangible. The more co-benefits a project can offer, the better story you can tell around the carbon reductions."

In recent years, such co-benefits have become increasingly important aspects of voluntary carbon projects – as is attested by the popularity of clean cookstove and water purification projects, which, according to the latest survey of the market carried out by information provider Ecosystem Marketplace, accounted for 24% and 4% of the market by volume in 2013. 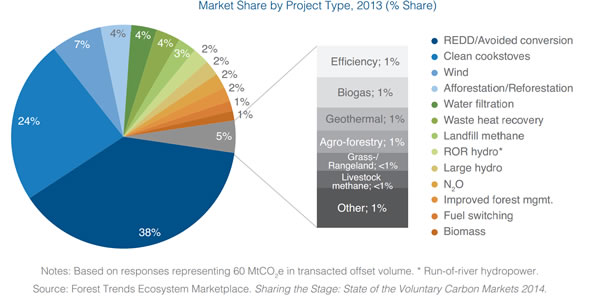 But the projects that offer the largest suite of co-benefits are 'REDD+' projects – projects that seek to protect threatened forests, and prevent the vast quantities of carbon they store from entering the atmosphere. Such projects now make up the single largest component of the voluntary carbon market – supplying 38% of volumes transacted last year, according to Ecosystem Marketplace.

A recent landmark study¹, carried out by researchers at Imperial College for the International Carbon Offset and Reduction Alliance, sought to put a dollar figure on the social, economic and environmental benefits that carbon offsets provide over and above their climate benefit. It analysed a sample portfolio of projects, which collectively reduced annually 32 million tonnes of carbon dioxide, and found that each offset delivered a whopping $664 of co-benefits.

A recent landmark study by Imperial College found that each carbon offset delivered a whopping $664 of co-benefits.

This figure comprises $3 in economic benefits, from job creation or sourcing local goods and services, $0.56 in social benefits, such as the provision of education, healthcare or transport services, and $52 in avoided energy costs. But the vast majority of the co-benefits – $602 per offset – was accounted for by projects that conserve natural ecosystems. Land protected or reforested for carbon sequestration also delivers services such as soil protection, water regulation and biodiversity conservation, which have been valued by The Economics of Ecosystems and Biodiversity project. 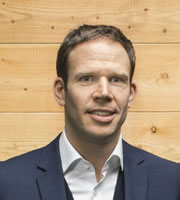 "REDD+ scores highest in terms of co-benefits due to the nature of the projects," says Gassner. Part of the reason is the sheer size of some of these projects, which protect large areas of tropical forest, with commensurate ecosystem service provision.

But another element of REDD+ projects that makes them attractive to offset buyers is that, to function effectively, they need to provide the communities that depend upon the forests with alternative livelihoods – livelihoods where the forest is worth more to them standing than felled. The result is a range of social and economic co-benefits to local communities.

The Kasigau Corridor REDD+ project, developed and managed by California-based Wildlife Works, protects 500,000 acres of dryland forest in Kenya and is widely considered to be a leading example of the type. It safeguards a critical wildlife migration corridor between the country's Tsavo East and Tsavo West National Parks, protecting highly threatened elephants along with more than 300 other animals and birds.

Kasigau generates 1.4 million tonnes of carbon offsets, or 'verified emission reductions' (VERs), each year, the sales of which have seen $3.5 million channeled back to the community since 2010. Proceeds from the sale of VERs are shared with local landowners and the broader community – directly and indirectly benefitting some 100,000. Among other things, the VER proceeds have paid for high school or university fees for more than 2,500 children, and created local employment, with more than 300 permanent jobs created, including conservation rangers, forest managers, horticulturalists, agricultural advisors and teachers. 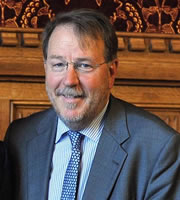 "We think the Kasigau project is outstanding," says Gassner. "Wildlife Works has figured out how to use the REDD+ mechanism to engage a community to protect its natural resources and directly benefit by doing so."

"Communities must have their broad development needs – education, health, jobs, housing, food and water, security – improved by a REDD+ project in order for them to be in favour of that project for the long term" says Mike Korchinsky, president of Wildlife Works. "If communities are going to choose to shift their lifestyle towards a green development path, they need to be provided with substantial economic benefits, training and other assistance in the early stages of the transition. If the financial benefits to the community of protecting their forests are substantial enough, over time the community will learn their own adaptation approaches to developing in a forest-friendly way."

Barclays doubles down on Kasigau project

In early November, Barclays announced that, as part of its global carbon offsetting programme, it was to renew its support for the Kasigau project. The bank has a target to reduce its greenhouse gas emissions by 10% by 2015, against a 2012 baseline – an objective it is meeting by minimising its operational impact. However, internal reductions can only get the company so far. "Being able to offset our emissions through reputable projects like REDD+ is crucial," says Kirsty Britz, director of citizenship for Barclays.

But for Barclays, offsetting is not just about emissions. In common with many offset buyers, Barclays recognises the additional benefits over and above climate protection that REDD+ projects offer. "The project appealed to us because REDD+ goes beyond just focusing on deforestation. It looks at protecting forests, wildlife conservation, community development, job creation and basic infrastructure development," Britz says.

And the location of the project fitted with the bank's geographic footprint: "Barclays has a large presence in Africa, so it's important to us to be able to support a local project with tangible results."

She notes that REDD+ as a mechanism "has a track record of success and recognises the economic value that forests provide, safeguarding them for the future". And the project's benefits extend beyond the environmental: "The project itself has provided crucial jobs in the region; including roles producing eco-friendly products and protecting wildlife – over 300 jobs have been created in total. The programme has also supported social development in the region by funding the construction and staffing of schools and providing access to clean water.

"The Kaisgau Corridor project is a great example of how we are helping to empower a community to develop sustainable livelihoods and support long-term economic growth."

Buyers such as Barclays want assurances that the projects from which they buy offsets operate to high levels of integrity. "Ensuring our offsetting projects are assured to a verified standard is important," says Britz. "In 2011, the Kasigau Corridor project became the world's first REDD+ project to be validated and verified under the Verified Carbon Standard and the Climate, Community and Biodiversity Standard [CCB]." The project has also been awarded the distinction of Gold Level status by the CCB for exceptional biodiversity and climate benefits.

"Being able to meet members of the community and speak to them directly about how the project has impacted them has also been important."

Britz concludes: "The forests of the world won't be saved by these actions alone, but REDD+ is one mechanism that can help make a lasting difference to the protection of threatened forests and the communities which rely on them."

REDD+ projects operate on a 'payment-for-performance' basis, involving upfront investments in the community and design of the forest protection programme followed by rigorous monitoring, verification and third-party auditing to ensure that the forest in the protected area remains standing. These processes add costs but, as well as providing offset buyers with the necessary assurances, also create jobs for the local community. "Job creation is our core conservation strategy," says Korchinsky.

"We see monitoring and verification by international auditors as a critical piece of what sets REDD+ apart," he says. "It's critical for the communities; they understand that the project is pay-for-performance, that it's not whimsical or unpredictable. They like the predictability ... and the opportunity to plan for their future, if they are able to protect their forest."

"Communities must have their broad development needs improved by a REDD+ project in order for them to be in favour of that project for the long term" Mike Korchinsky, Wildlife Works

The monitoring and measurement of REDD+ projects' co-benefits are, of course, also critically important to offset buyers. "Voluntary market buyers are making purchases that make a statement about their company and their commitment to the environment, biodiversity and social good," says Korchinsky. "Their greatest concern is whether the claims the project is making are true ... All voluntary market buyers are extremely focused on the co-benefits from a risk standpoint."

The first stage is for projects such as Kasigau to pursue verification under one or more of the market standards that exist. The project is verified under the Voluntary Carbon Standard, a market benchmark which provides assurance that the project is, indeed, protecting at-risk forest, that local land-title is observed, and that monitoring and measurement processes are robust, among other things. It has also achieved 'Gold Level' status under the Climate Community and Biodiversity Standard for its biodiversity co-benefits.

Korchinsky adds that some clients then seek to do their own due diligence – physically visiting the project, for example. This is where established market intermediaries such as First Climate can be particularly useful, especially for smaller buyers, in providing another layer of assurance that a project is credible.

Certainly, Wildlife Works can boast a blue chip client list, with Microsoft, Allianz, Audi, La Poste and Kering (owner of brands such as Puma, Gucci and YSL) all buying its REDD+ offsets. In October, banking giant Barclays announced it has purchased VERs from the Kasigau project for a second year, increasing its purchase to 150,000 tons from 39,000 last year (see box).

But the greatest challenge for REDD+ projects such as Kasigau is the lack of certainty around future revenues from offset sales. "The main challenge in the voluntary market is the lack of predictability," says Korchinsky. "To a large degree, it's a spot market. Some of our customers are increasingly looking at signing up for multi-year commitments, and this is something we push hard – we want them to understand that the commitment we are asking the community to make to move down a low-carbon pathway is a permanent commitment."

Fortunately, a growing number of companies are coming round to that way of thinking, he says. "They are realising that if they want to really see the impact of their investments, they need to commit to a place, and to a project, for a number of years. It's different to how things have been done in the past, but it's more impactful engagement."