According to the United Nations Convention on Biological Diversity (CBD), biodiversity is defined as "the variability among living organisms from all sources including, inter alia, terrestrial, marine and other aquatic ecosystems and the ecological complexes of which they are part: this includes diversity within species, between species and of ecosystems."

Figure 1: Examples of global declines in nature, emphasising declines in biodiversity, that have been and are being caused by direct and indirect drivers of change. 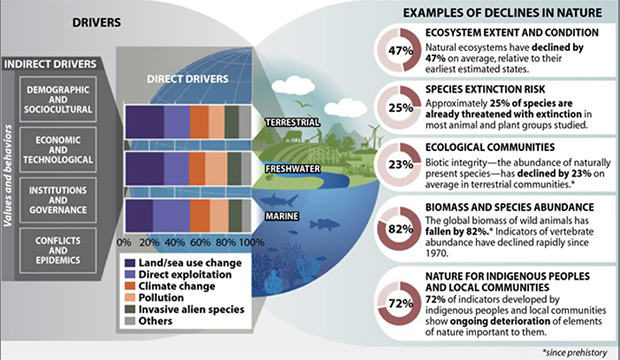 Of the global limits set by the Stockholm Resilience Centre for the nine planetary processes essential to sustain human life on Earth, already six have been exceeded (see Figure 2) such as pollutants or land system change. Of these, the global biodiversity limit has been exceeded the most.

Figure 2: Illustration of the planetary limits for the nine Earth system processes 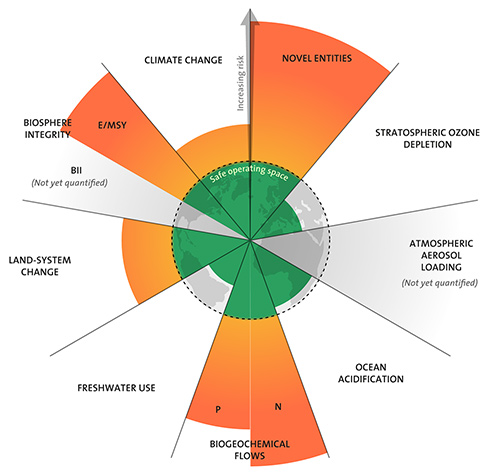 How to measure corporate biodiversity footprint

Figure 3: Pressures and sub-pressures on biodiversity considered in the CBF methodology and based on the five main drivers identified by Ipbes (2019) 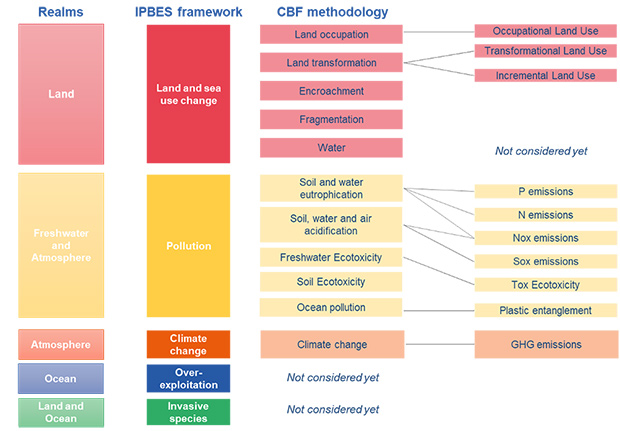 We partially cover marine biodiversity through the pressure of plastic entanglement related to marine species only. This pressure is part of the main pressure "Water Pollution".

The CBF models the impact of corporates on biodiversity through four main environmental pressures on species and habitats:

These pressures are calculated along the whole value chain of the corporate, appraising their processes, products, and supply chains. All pressures are aggregated into Scope 1, 2 and 3 (upstream and downstream) according to the definitions and boundaries set forth in the GHG Protocol.
Finally, the CBF provides a score that is expressed in the unit of km².MSA (see Figure 4).

How to create positive impact

At this stage, the contribution to Positive Impact will be approached through three pillars:

The "Reduced Impact" can be defined as the reduction of impact on biodiversity of a company or financial institution over time. The reduction can be calculated between two years for which analyses have been completed.

The "Avoided Impact" is defined as the impact on biodiversity that a company or financial institution will have avoided over time compared to a baseline scenario established for the biodiversity and for each main sector. The biodiversity scenarios are under development.

The "Compensated Impact" will be approached through positive land transformation (restoration, rehabilitation of lands, etc.).

How to assess the dependency

The dependency of an economic sector to an ecosystem service illustrates how that sector can take advantage of the given service and how disruption of the service might negatively impact the economic sector.

IDL recently developed the Dependency Score derived from the ENCORE tool. Based on 26 ecosystem services (regulating, provisioning and cultural), IDL provides three sub-scores for each type of ecosystem services and a final score aggregated at the company level. This approach allows companies and financial institutions to evaluate, measure and calculate their dependencies to ecosystem services for each sector. 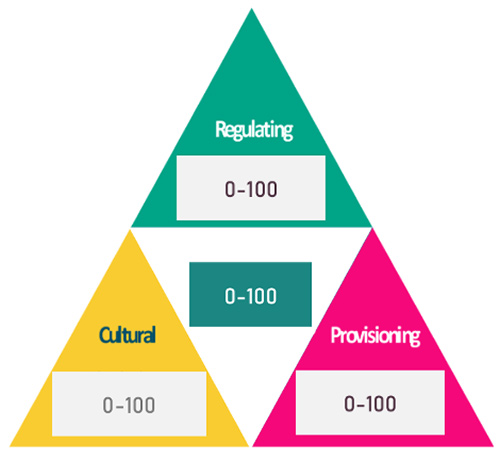 How to align with the regulations

The Global Biodiversity Framework (GBF) that was adopted in Montreal includes four goals and 23 targets. Target 15 requires companies and financial institutions to monitor, assess and disclose their risks, impacts (positive and negative) and dependencies on biodiversity all along their operations, supply chains and portfolios.

From a regulatory perspective, the CBF provides an analysis of the contribution to the reduction of the main pressures and impacts on biodiversity identified by the Ipbes.

The CBF largely meets the objectives of the CBD (first adopted in 1992). Expressed in -Km².MSA, it is a quantitative metric, comprehensible by non-experts which reflects the ecosystem condition and allows users to account for stocks and variation of stocks of biodiversity through the MSA.

IDL is a forum member of the Taskforce on Nature-related Financial Disclosures (TNFD). Following the working groups of the TNFD, IDL is currently conducting pilot testing of the beta TNFD framework and the LEAP-FI and V-Process approach with the CBF and in partnership with some financial institutions. Our biodiversity measurement approach uses metrics and indicators as recommended in the TNFD guide.

The CBF could be used for impact metrics (in an absolute value) and measuring impact drivers such as change of land-use or pollution. The CBF can also give indicators in a relative value (per €Million). This would help companies and investors to evaluate their impacts and dependencies on nature.

The two phases "Evaluate" (LEAP-FI) and Assess & Prioritize (V-Process) all for the following to be assessed:

Article 29 of the French law

The CBF complies with the Article 29 of the French law on Energy and Climate.

The CBF metric is carried out in a bottom-up manner. Absolute and relative impacts (demonstrated with financial indicators) enable peer comparisons to be made. It covers the whole value chain (Scope 1 ,2 & 3, upstream & downstream) and the four main environmental pressures (Land Use, Water Pollution, Climate Change and Air Pollution).

Using a comparative measurement approach allows users to implement "best-in-class" or "best-in-universe" approaches as well as positive or negative screenings. The CBF also allows financial institutions to integrate their impact on biodiversity in their strategies and decision-making processes with a science-based approach. In 2022, some major financial institutions (BNP Paribas Asset Management and Axa IM) used the CBF for measuring and reporting their negative impacts on biodiversity as part of their "Article 29" reports.