What role can ratings agencies have to play in stemming biodiversity loss? And what are they doing?

Our role in this as a ratings agency is looking at the credit information of emerging regulations, emerging market trends around biodiversity conservation. So that can be either from an impacts perspective, where we see for example pesticide regulation causing an issue, on operating costs. We see the European Commission and the UK government exploring due diligence regulation, which would put the burden of proof on buyers of forest risk commodities to demonstrate that they are minimising adverse impacts on biodiversity.

The flip side of it is also the dependencies side of the equation, so understanding within supply chains where some of those critical dependencies are in biodiversity and conservation. As a ratings agency we're trying to look at these emerging credit risks, which are mostly latent risks rather than risks that are having any meaningful credit impact today.

At present there's very limited credit impact but we can see very quickly that the policy and regulatory frameworks are starting to emerge around biodiversity conservation. Over time I think that will lead to a push for more standardisation of disclosure data, particularly around nature related financial risks.

The Taskforce on Nature-related Financial Disclosures (TNFD) has been a major disruptor in the market. That is reinforcing a lot of trends, particularly among asset owners, pushing for better disclosure of impact dependency data around biodiversity. We are seeing that to some degree impacting on banks and other financial institutions as well. The driving force of this has really been asset owners, similar to what we saw with climate change in the last five or six years.

In the report Investors Grapple with Stemming Biodiversity Loss Fitch emphasises better financing terms to incentivise biodiversity, is the solution as simple as that? Are we seeing an uptick?

It's not the whole solution. It'll be regulations, better information on supply chain risks, increasing use of technology in reporting on biodiversity impacts and TNFD standardisation of data will play a key role. There will be a push for understanding where those impacts and dependencies are occurring in supply chains and doing that in a more granular way. There's a really a dearth of data linking upstream company operation and assets to downstream land use change and biodiversity loss. We have good information on these two datasets, but a dearth in linking the two. That is starting to change with better satellite and remote sensing data and that will start to put pressure on some agri-businesses to demonstrate that they are minimising those impacts.

The point around financing is relating to the wider point around what is driving biodiversity risk. In many cases we know this is quite heavily dominated by state owned enterprises, by private companies so a lot of the levers we've seen addressing issues around climate change in many ways are less effective for aggressive biodiversity because of those structural challenges. So it becomes a question of how can we influence some of these structural drivers of deforestation and biodiversity loss. 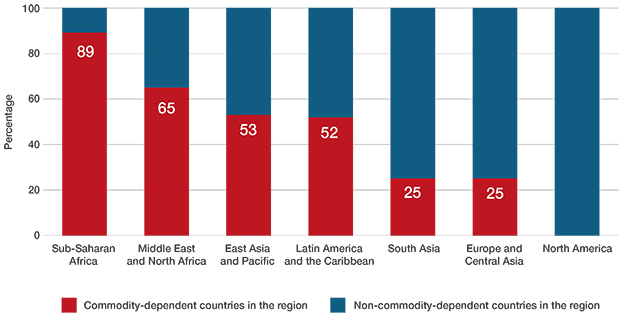 One of the areas which we felt was really interesting from this perspective was, in addition to the stick of regulation, having a carrot by tapping into the impact investment community and looking at the explosive growth we've seen of green, social and sustainability bonds and fixed income markets. We recognise that states are major actors both in driving deforestation and biodiversity loss but also potentially in some of the solutions, so if you can provide some incentives to address some of these issues that could yield some positive outcomes for development, managing debt burdens and for biodiversity conservation. We've started to see some of this with, for instance, the World Bank's Nature and Performance bonds, the re-emergence of debt for nature swaps as an investment class. There's a suite of opportunities there for investors to engage with biodiversity as an opportunity.

The explosive growth of voluntary carbon markets and nature based solutions, typically related to forestry and land use that are driven by climate mitigation concerns that can also demonstrate nature and biodiversity co-benefits. So that can be a critical part of the equation over the next decade as a lot of capital flows from developed markets, particularly high-emitter sectors, looking for carbon credits that can demonstrate biodiversity co-benefits in addition to climate mitigation.

How do we go about strengthening the relationship between biodiversity and nature loss to credit? Of financial materiality of biodiversity loss to corporate performance

The key thing here is understanding the financial transmission mechanisms of nature and biodiversity issues in credit impacts. We've published a series of research, ESG in Credit, which is across all the environmental topics that we address within our ESG core relevance core framework, we provide examples of elevated ESG relevance core issues, we can demonstrate examples from where these can go from an environmental issue that doesn't have a credit impact into something that is impacting on the right thing.

The challenge is a lot of these are latent risks, they're risks that accelerate over the next 10 years as regulations tighten, as our understanding of the drivers of biodiversity loss and attribution of these losses to companies increases I think we are likely to see these issues become credit relevant. Whether that's through tightening supply chain regulations, we have seen the EU and the UK take the lead on that, whether it's through activist investors taking the lead on these topics and divesting in some cases. Nordea Asset Management have been active in this area in the last couple of years with their Brazilian deforestation policies, where they've paused investment in sovereign bonds there.

There's three pillars; the transition, the physical, and the litigation aspects.

It's similar to climate change, we can look at this from a transition risk perspective or regulations, certainly in many developed markets a lot of regulations put the burden on buyers of forest risk commodities for example. We can see this in physical risk, where we know that tropical deforestation, biodiversity loss could lead to heighten exposure of cities, municipalities, company assets to more extreme weather conditions to drought, storm conditions.

In addition to that we see litigation risk on the rise, we're starting to get more climate litigation directed at corporates in particular. I think that's something that'll be the on the increase.

How optimistic are you for the future of biodiversity after COP26, the One Planet Summit in October and various other programmes being launched such as the Green Recovery Action Plan for Africa?

I think if these programmes are executed properly, we can certainly see a lot of that biodiversity conservation gap of the financing, both from private and public sector funds. I think a really big breakthrough at COP26 was agreement on Article 6 of the Paris rulebook on voluntary carbon markets and on bilateral trades between countries. We have started to see the bilateral carbon credit trade industry take off in the last couple of years.

The area that gives me optimism is the alignment of climate and nature conservation policies, which has not been emphasised terribly heavily but in the context of the Covid-19 recovery, the heavy debt burden of emerging markets, recognition that creative solutions will be needed here. We've also seen the private sector massively ramp up the scale of net zero and carbon neutrality pledges. I think there's a recognition that these pledges need to be delivered on.

What will be critical over the next 10 years will be getting a chance of mind-set in many of these emerging markets, from seeing the nature-based assets as something of liability that incurs management costs to them to actually seeing these as natural assets. Some of the agreements we saw at COP26 reflect that.