There is no obvious reason for EU Allowance (EUA) prices to rise this week, as auction volumes increase and mild weather continues, says Louis Redshaw. But long-term hedging by utilities could boost demand. 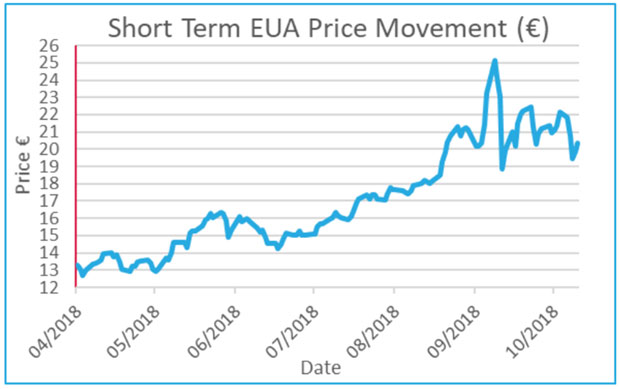 EUA prices fell more than 8% last week as mild weather weighed heavily on carbon and the wider energy complex. Carbon was facing larger losses intra-week, but long-term trend support held, enabling EUAs to claw back some of the losses. It was a week of two halves as prices slid in the first half of the week and recovered in the second half.

Tuesday and Wednesday saw the biggest daily declines when €1.07 and €1.32 were wiped off the price, respectively. As prices slid, a test of the long-term trend support came into view. This support was materially breached on Thursday morning as prices gapped lower and aggressive selling continued to pressure allowance prices. The move through the trend line, likely a level targeted by speculators short from the previous day, elicited support as short speculators reversed positions and industrial buyers stepped in to take advantage of the price drop. Crucially, prices recovered enough by the end of the day to end above the trend line and stop the rot. The recovery continued Friday and the market closed near the high of the day, but the recovery was lacklustre when compared to recent large moves.

Auction demand statistics mirrored the price action as cover ratios were below average in the first half of the week before a strong showing in both the Thursday and Friday auctions. However, despite apparently high bidding interest, Thursday's auction cleared at a significant discount to secondary market prices. This suggests that some of the bidding may not have been genuine demand, rather traders low-balling high volumes in an attempt to make the market appear well bid.

Prices in the wider energy market also suffered through the week as mild temperatures curtailed power and heat demand. However, with coal and carbon both falling, there was a significant strengthening of the long-dated clean-dark spreads with the near-dated spreads also improving.

Price Impact: the strong bull run has shown its first major sign of weakness. The recovery back above the long-term trend will give the bulls some comfort, but it also sets up the prospect of further downward moves, even if just to test the upward trendline support again.

Our weekly outlooks over the last few weeks have proved incorrect as the yo-yo nature of the EUA market suggests that, at present, the market is relatively balanced without a dominant price driver. We said for two weeks that the market would go down due to ample supply, only for it to go up and then last week we gave in and concluded that whatever was driving price up would find it easier with less auction volume. But, in the end, the extra supply did prove too much for the market.

We are yet to be convinced by the recovery at the end of the week owing to the bulls running out of steam on Friday. Technical analysis firm FuturesTechs also highlight €21 as an important level to be retaken by the bulls because it is where the highest volume has traded in recent weeks.

This week the mild weather continues but the stronger longer-term clean-dark spreads may see utilities step up longer-dated hedging to help offset the reduced prompt demand. Auction volumes also increase this week as the larger UK auction replaces the Polish auction on Wednesday. The additional 2Mt will need to find a home.

In conclusion, if the market couldn't go up last week when it had the support of improving clean-dark spreads and reduced auction volumes, we don't see any obvious reasons for it to rise this week. If the upwards trendline is tested again, it could be a case of third time lucky for the bears. However, the major European carbon conference takes place this week (that can often precipitate moves in line with the fundamentals) and each week that passes is a week closer to the start of the MSR, so when combined with current levels of volatility, unexpected moves in either direction are possible.

UK to exit EU ETS in March under hard Brexit

The UK government said on Friday that it would stop participating in the EU ETS after 29 March 2019 under a no deal exit from the EU. UK emitters would no longer be required to buy and surrender EU ETS allowances to cover their emissions. The deadline for UK emitters to surrender EUAs to cover their 2018 emissions is 15 March 2019. This would also apply to flights originating or terminating in the UK.

However, it remains unclear how a no-deal Brexit would affect the domestic carbon floor price mechanism, with further details to be provided in the budget on 29 October. The EU would invalidate any EUAs issued by the UK in 2019 in a no-deal Brexit scenario to protect the market against a sudden influx of supply, should UK emitters sell off allowances they no longer need for compliance. UK installations would also be unable to use EUAs issued by the UK in 2019 to cover their emissions for the 2018 compliance year. Following the UK's EU exit, UK emitters currently in the EU ETS will still be required to comply with EU ETS rules on monitoring, reporting and verifying their emissions. Maintaining emissions reporting standards would make it easier for the UK to set up its own domestic carbon market, which could then link back to the EU's system. The government also warned that access to UK accounts in the EU ETS registry is not guaranteed following the withdrawal from the EU.

The Polish government is preparing to compensate its domestic industry for rising EUA prices and will again request that Brussels intervene in the market because they believe the conditions for action have been met. The government is looking at an initiative which could be funded through the country's EUA auction revenues, which is forecast at €1.25 billion this year. The plan would be for one third of the funds to be allocated to Poland's energy-intensive industry, with the remainder either going to utilities or households to reduce electricity prices.

However, any financial support for companies with higher energy prices will require confirmation from the EU. Some Western European countries have opted to make use of an EU provision to compensate energy-intensive industries for higher electricity prices resulting from indirect emission costs under the ETS. Poland currently makes use of a derogation in EU law to give their power generators a portion of their EU carbon allowances for free to help them invest in modernisation.

The Danish government is to cancel EUA allowances issued through the EU ETS as a means of contributing towards its long-term climate goals. Denmark will cancel 8 million EUAs between 2021 and 2030 as a contribution towards its 2030 climate goal of cutting emissions from sectors not covered by the EU ETS. The cancellation of EUAs reduces emissions in the EU by tightening the volume of permits available to buy through auctions. A separate provision in EU law gives any member state the option to voluntarily cancel EUAs in the event of closures of power generation capacity on their territory, to ensure the carbon market is not flooded with excess permits. Germany has said it intends to use this option.

The EU emissions trading system is failing to deliver a pricing signal to investors in long-term emissions reduction projects, because of volatility in the price. The EU ETS has been "very bad" at providing long-term certainty for investors in low-carbon projects such as wind farms, which require years to develop, University of Oxford's sustainable finance programme director, Ben Caldecott, said at the Financial Times Climate Finance Summit. The start of the Market Stability Reserve (MSR) in 2019 will deliver a "higher and more stable" EUA price, but further policy intervention in the carbon market, such as a price floor, may be required if the EU ETS is to provide long-term investor certainty.

Louis Redshaw is a founder of Redshaw Advisors