Last week's break of the upward trendline for EU Allowance prices is a bearish signal but this may be offset by smaller auction volumes and lower temperatures, says Louis Redshaw. 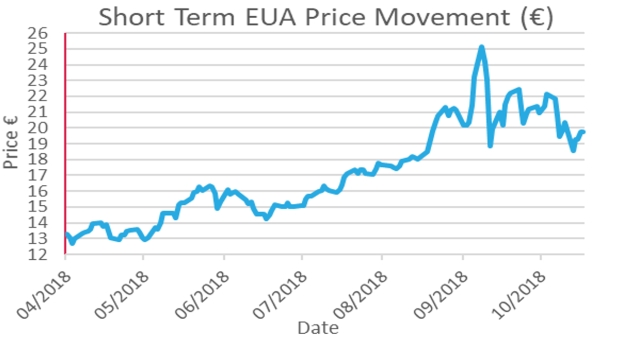 It was another volatile week for EU Allowances as prices traded in a €2.79 weekly range, but ended the week at €19.77, down only 59c having found willing buyers at the lower levels. The largest daily decline was on Monday when prices fell €1.79, largely reflecting wider energy price drops.

The following three days saw further downside, particularly Tuesday and Thursday when the EUA price reached lows of €17.82 and €18.12 respectively. However, on each day buyers stepped in to stem the losses by the end of the day and ensured that closing prices stayed above the long term trendline every day except Monday.

The end of the week was marked by a recovery and more volatility, with EUAs managing to climb back through the €20 level briefly on Friday, but sellers emerged to push prices back down into the close. This made for a relatively small 3% weekly decline when compared to intra-week losses that, at the €17.82 low, peaked at 12%. Power prices largely mirrored the carbon price action as early week declines were cancelled out. The effect on the clean-dark spreads was mixed as coal gains offset carbon declines to leave the spreads little changed.

Price Impact: Despite the recovery from the lows, the fact that EUAs closed the week in negative territory and managed a closing price (on Monday) below 2018's upward trendline suggests that the uptrend has been broken.

The tussle for supremacy continues between the bulls, bears and options delta hedgers -- and results in volatility.

From a fundamental perspective, auction volume falls by more than 3Mt this week as the UK auction is replaced by the smaller Polish auction and the German auction on Friday returns to normal volumes after four weeks of inflated volumes.

Temperatures appear to be heading down towards more seasonal norms following an extended period of above average temperatures. This should ensure some extra utility demand and will help pare losses in natural gas contracts.

For those following the technicals, Futurestechs remains on the side of the bulls for now following the dip buying witnessed last week. They cite €19.47 and €19.32 as the first levels to be defended on the downside. To the upside, €21 is the target to be retaken to put the bulls in control.

After several position washouts last week, speculators will be taking a back seat until there is a compelling reason to take a position in either direction. We therefore side with the technicals: prices below €17.60 indicate further losses and above €21 suggest further gains. In the meantime, we go into the week with a neutral outlook: bearish developments in the form of losses and the break of the upward trendline last week are potentially balanced by slightly bullish developments this week.

Under Article 29a of the ETS Directive, the European Commission is required to hold a committee meeting to discuss the possibility of increasing market supply if, for more than six months, the EUA price is more than three times the average price from the previous two years. Last week Poland called for the Commission to hold this committee meeting, in response to this year's significant price rises. However, EUA price levels in the past six months have not been high enough to invoke Article 29a.

Market observers and analysts have said it is unlikely that the Commission will respond to Poland's call for it to intervene, given current price levels and a lack of support for price intervention from other member states. Delegates at the Carbon Forward conference were told last week that they could expect no intervention until major EU countries joined Poland's call for some form of price management.

"Politically unfeasible" for the UK to remain in EU ETS

Remaining in the EU ETS following Brexit would require the UK to continue to pass funds from its EU ETS allowance auctions back to Brussels, while potentially losing its say in deciding future market reforms, making it "politically unfeasible". This is the view of EU ETS reform rapporteur Julie Girling, MEP that she expressed at last week's Carbon Forward conference.

In the same panel discussion, it was revealed that the UK government is considering four options to continue with carbon pricing: remain in the EU ETS until 2030; set up a domestic ETS that could link to the EU's; set up a standalone UK carbon market; or replace ETS participation with a carbon tax.

Emily Briggs of BEIS said that the UK would remain in the EU ETS until the end of its third trading phase (2020) if the UK reaches a deal on a transitional period for its EU exit. If no deal is reached, the UK will replace the EU ETS with a UK 'carbon price'. Delegates were told to expect further detail of 'no-deal' carbon pricing in the UK's budget announcements on 29 October.

Redshaw Advisors comment: details are yet to emerge of the level at which the UK plans to continue to price carbon in any 'no-deal' EU ETS follow-on. To avoid disruption to the power utilities and companies that hold an excess of EUAs (whether through purchases or banked free allocation) as well as to the overall EUA marketplace, it is our view that any carbon pricing plan may have an element of EUA price in it (for example by returning to the UK's

carbon price floor mechanism and extending it to non-power EU ETS sectors and by allowing free allocation and EUA inventory to be surrendered in (part) settlement). We shall know more by this time next week.

Coal-fired generation could increase under a 'no-deal' Brexit

Louis Redshaw is a founder of Redshaw Advisors