The main stock indexes of the G7 countries are collectively on a pathway for a 2.95°C temperature rise by 2050, analysis by the Science-Based Targets initiative (SBTi) has found, with those in US, UK, Canada and Japan on track to contributing to at least a 3°C increase. 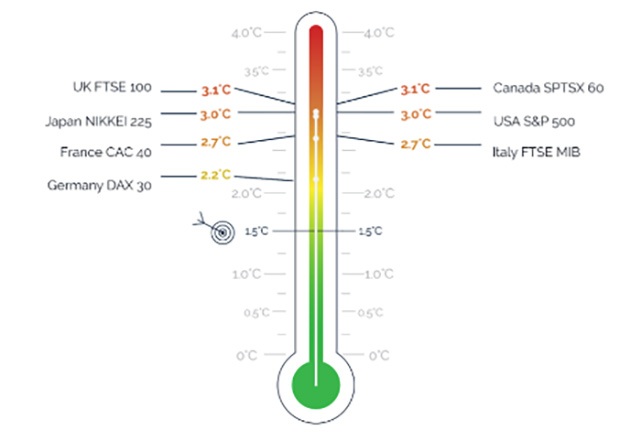 SBTi has released a four-point action plan to get G7 companies’ emissions on track for a global 1.5°C increase by 2050, which is the goal of the Paris Agreement on climate change.

Climate is expected to be a major talking point at the next G7 meeting, kicking off today in Cornwall in the UK, but across the G7 country stock indexes, more than three-quarters of companies are failing to align their emissions targets with a 1.5°C increase, the SBTi said in a report produced by the United Nations Global Compact and the CDP, an NGO. The CDP is a founding member of the SBTi.

The 34-page report, Taking the Temperature: Addressing and Scaling-up Climate Ambition in the G7 Business Sector, focuses on the targets of companies between 2025 and 2035 due to the “urgency to halve emissions by 2030”.

The four points outlined by the SBTi to encourage investors, governments and financial institutions to support a 1.5°C increase are:

“Targets are considered ‘science-based’ if they are in line with what climate science deems necessary to meet the Paris Agreement’s goals and limit warming to 1.5°C”, the SBTi said.

For these targets to be credible they also need to be comprehensive, actionable, transparent, and independently assured, the initiative said. To help companies set the targets, the SBTi invites companies to join its Business Ambition for 1°C campaign.

The largest source of emissions for the “majority” of companies was from their supply chains, SBTi said.

“More companies have been setting ambitious targets for emissions coming from their own direct operations, scopes 1 and 2 emissions, but when considering the entire value chain, all indexes report less than 30% of their companies with targets at or below 2°C.

“Especially in hard-to-abate sectors, mobilising investors to incentivise the adoption of science-based targets will be key to encourage industries that are lagging behind on climate ambition.” 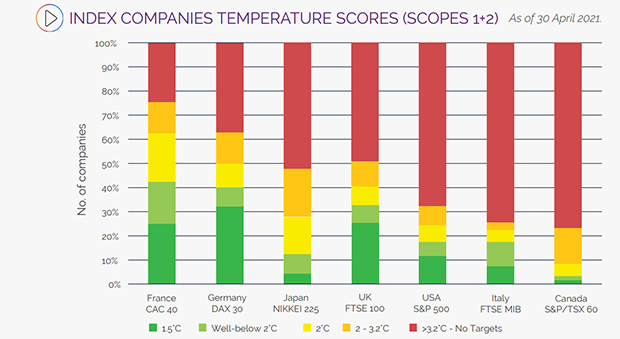 Companies that have set science-based targets are already delivering “large-scale emissions reductions” far greater than the wider economy, as has been shown in the SBTi Progress Report 2020, the initiative said.

There is potential for the G7 stock indexes to be closer to a 1.5°C pathway in future, as many companies have signed up to the Business Ambition for 1°C campaign, it continued.

“The private sector has a critical responsibility in the transformation to a sustainable, zero-carbon, climate-resilient economy.

“The current level of corporate climate ambition within G7 market indexes is strikingly insufficient. This is because many companies have yet to set targets, and the targets already set are not equal in ambition.”

SBTi board chair, Lila Karbassi, said: “This report highlights the urgent need for markets and investors to deliver on the goals of the Paris Agreement. As the G7 meets this week, governments must go further to incentivise ambitious science-based target setting.”

The SBTi report follows the G7 asking investors in May to set science-based targets.