Swiss Re has been doing more than other insurers to limit its exposure to coal on both sides of the balance sheet, a report by Unfriend Coal has revealed.

Zurich, Axa and Scor were also praised by the network of climate activists.

On coal underwriting, the report described Swiss Re and Zurich as leaders in ending coal insurance. "Their policies address coal as well as tar sands, and include new and existing projects, as well as the companies operating in these sectors."

The report said Axa and a number of other insurers have adopted less comprehensive policies, but most exclude insurance for new coal projects.

On divestment, the environmentalists said Swiss Re, Scor and Zurich were leading the way as their policies exclude both coal and tar sands projects and, in the case of Scor and Zurich, any company that plans new coal projects.

UK insurer Legal & General has no formal coal divestment policy, the report said, but it scores highest for other climate leadership for its commitment to align its investment portfolio with the Paris Agreement.

This includes the third-party assets it holds through its asset management arm Legal and General Investment Management.

Axis Capital, Chubb and QBE were ranked fourth, sixth and eighth, respectively, in coal underwriting – an improvement from 2018 – as these firms announced restrictions this year.

The number of re/insurers withdrawing cover for coal has more than doubled in 2019.

In 2017, three (Axa, Scor and Zurich) announced they were limiting their underwriting activities for the coal sector.

This was followed by four in 2018 (Allianz; Swiss Re, Munich Re and Generali), and a further 10 in 2019, including US and Australian firms: VIG; Mapfre; Uniqa; QBE; Hannover Re; Talanx; NN Group; Chubb; Suncorp and Axis Capital.

Insurers have also divested coal from roughly $8.9 trillion of investments – over one-third (37%) of the industry's global assets, said Unfriend Coal. To date, at least 35 companies have taken action, up from 15 companies with $4 trillion assets under management in 2017, and 19 with $6trillion in 2018.

Peter Bosshard, coordinator of the Unfriend Coal campaign, said: "The role of insurers is to manage society's risks – it is their duty and in their own interest to help avoid climate breakdown. The industry's retreat from coal is gathering pace as public pressure on the fossil fuel industry and its supporters grows.

"However, major US and Asian insurers continue to undermine international climate action by insuring and investing in coal projects." 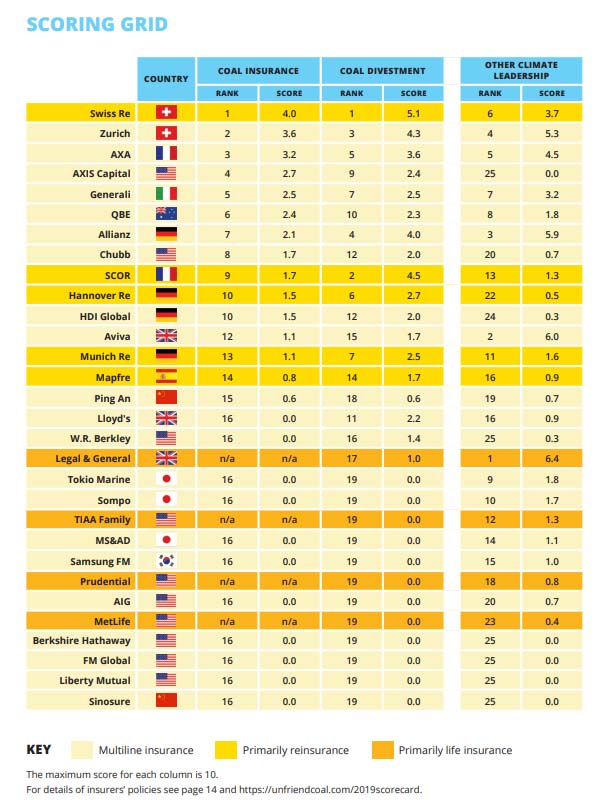