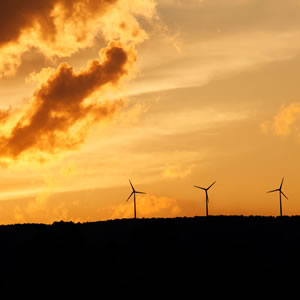 Investment in clean energy surged to a record $329 billion in 2015, helped by a boom in wind and solar projects which between them accounted for about half of all power generation commissioned in the year.

It means that clean energy investment is now nearly six times higher than in 2004.

Driving the growth was a near-30% increase in investment in both wind and solar photovoltaics, which respectively saw 64GW and 57GW of capacity commissioned during the year.

This combined total of 121GW represents around half of the net capacity added in all generation technologies including fossil fuels, nuclear and renewable, in 2015, said BNEF.

The strong renewables growth was despite strong headwinds including the fossil fuel price rout, the strength of the dollar, weakness of the economy in Europe – which had previously been a powerhouse of renewables investment – and falls in the price of solar installations.

The figures will boost hopes that the ambitious targets set at the Paris climate summit– to limit global warming to 2°C with aim of reducing it to 1.5°C – can be met.

"These figures are a stunning riposte to all those who expected clean energy investment to stall on falling oil and gas prices," Michael Liebreich, chairman of the advisory board at BNEF. "They highlight the improving cost-competitiveness of solar and wind power. Wind and solar power are now being adopted in many developing countries as a natural and substantial part of the generation mix: they can be produced more cheaply than often high wholesale power prices; they reduce a country's exposure to expected future fossil fuel prices – and above all they can be built very quickly to meet unfulfilled demand for electricity.

"It is very hard to see these trends going backwards, in the light of December's Paris Climate Agreement."

Looking at the figures in detail, the biggest piece of the $329.3 billion invested in clean energy in 2015 was asset finance of utility-scale projects such as wind farms, solar parks, biomass and waste-to-energy plants and small hydro-electric schemes. This totalled $199 billion, up 6% on the previous year.

The biggest projects financed last year included a string of large offshore wind arrays in the North Sea and off the coast of China. These included the UK's 336MW Galloper, with estimated costs of $2.3 billion and Germany's 402MW Veja Mate, at $2.1 billion.

Rooftop and other small-scale solar projects was a hotspot. This sector saw $67.4 billion of spending, up 12% on the previous year, with Japan by far the biggest market, followed by the US and China. 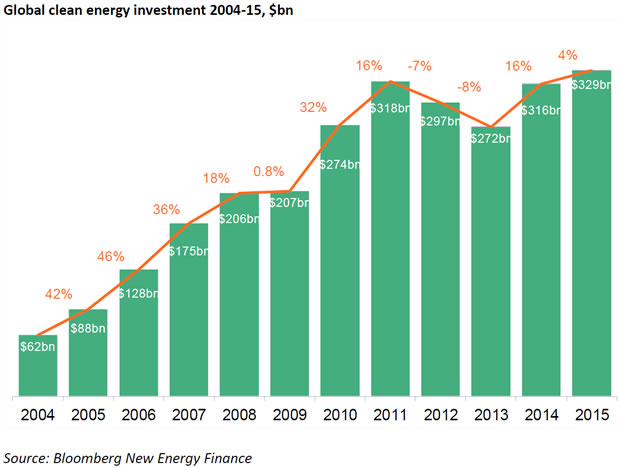 Public market investment in clean energy companies was at $14.4 billion, down 27% from 2014 but in line with the 10-year average.

There was $20 billion of asset finance in clean energy technologies such as smart grid and utility-scale battery storage, representing an 11% rise on 2014, the latest in an unbroken series of annual increases over the past nine years.

China was again by far the largest investor in clean energy in 2015, increasing its dominance with a 17% increase to $110.5 billion. This is in line with its plan to create a national carbon market next year.

Second was the US, which invested $56 billion, up 8% on the previous year and the strongest figure since the era of the 'green stimulus' policies in 2011.

Within that, the UK was by far the strongest market, with investment up 24% to $23.4 billion. Germany invested $10.6 billion, down 42% on a move to less generous support for solar and, in wind, uncertainty about how a new auction system will work from 2017. France saw an even bigger fall in investment, of 53% to $2.9 billion.

India's investment rose 23% to $10.9 billion, the highest since 2011 but a far cry for the figures needed to implement the Modi government's ambitious plans.

Africa and the Middle East are two regions with big potential for clean energy, given their growing populations, plentiful solar and wind resources and, in many African countries, low rates of electricity access. In 2015, these regions combined saw investment of $13.4bn, up 54% on the previous year.