Sentiment in the voluntary carbon market remains bullish despite prices continuing to come under pressure, according to the latest survey of the market by Environmental Finance.

The average price of credits traded in the voluntary market slumped to some $3.80 per tonne of carbon dioxide (CO₂) in 2014, according to a report from US not-for-profit Ecosystem Marketplace, marking their fourth consecutive year of decline.

However, market participants remain upbeat – mainly because they see increasing levels of interest in offsetting from companies, some of which are also applying internal carbon prices.

There is hope that some data centre providers and other large corporates will announce offsetting programmes in coming months, joining established buyers in the market such as Microsoft, which won the vote for Best Corporate Offsetting Programme.

"Times have been hard in the voluntary carbon market, but the zeal of many participants remains undimmed," said Peter Cripps, editor of Environmental Finance magazine and website. "Prices have come under further pressure, but many players see signs of hope ahead – namely in the form of increasing interest from companies who can see numerous benefits from offsetting."

"We see sustainability as a megatrend," says Stefan Rösch, the Zurich-based co-director of the account management team at South Pole. "The awareness and willingness of companies to measure environmental performance and then to take action is constantly increasing. Often, this leads companies into the voluntary carbon market."

Edward Hanrahan, a director at ClimateCare, which won the award for Best Project Developer - Health, takes a similarly optimistic view.

"For the first time in two years, I'm quite bullish about demand," he says. "We are having many in-depth conversations with corporates, whereas two years ago it was hard to get these conversations going."

But there were also warnings that current prices are, for many, unsustainably low.

"The price of some offsets is already below the cost of abatement for some projects," says Gareth Turner, co-founder and director at Numerco, which was voted Best Broker for the second year in a row. "There's very little room to squeeze prices further." 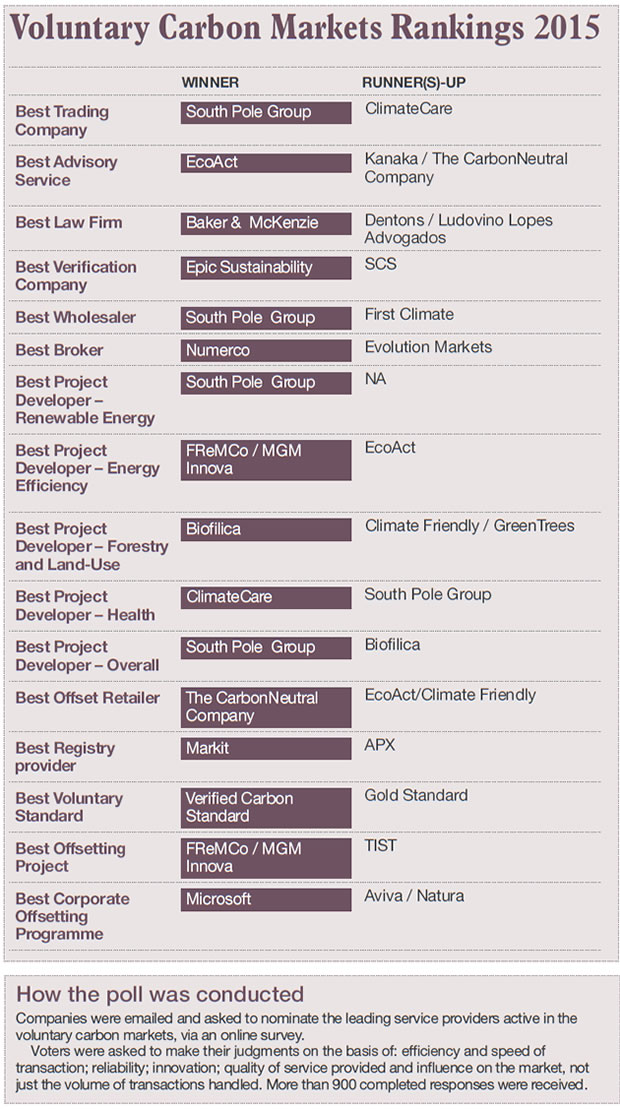