In Paris in December 2015 world governments agreed to limit global warming to below dangerous levels. To achieve the target of holding the increase in global temperatures to well below 2˚C and pursuing efforts to limit it to 1.5˚C, countries agreed to increase their climate action commitments on a 5-yearly cycle. Further specific targets were added: to achieve global peaking of greenhouse gas emissions (GHG) as soon as possible and to reach GHG neutrality in the second half of the century. This goes further and faster than anything previously agreed and signals that unabated combustion of fossil fuels must end by 2060.

In November 2016 the Paris Agreement came into force as governments responsible for at least 55% of total global GHGs deposited their instruments of ratification. The huge task that lies ahead in terms of delivering an economic transition that keeps the climate safe will now require an informed and sustained engagement between fossil fuel companies and the rest of society. Tackling a problem of this magnitude will need all stakeholders to play a part – not just 'energy decisionmakers'. This paper focuses on the challenges faced by one subset of fossil fuel companies, the oil and gas majors, and sets out their options to plausibly respond. 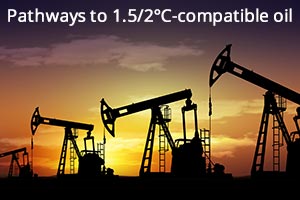