Insurers have a great deal of experience modelling natural catastrophes and this expertise will be core to how the sector copes with climate change risk. But transferring the knowledge is not straightforward, and getting the right data to the right people remains a struggle, as participants discuss in part one of this two-part roundtable from InsuranceERM (a sister publication of Environmental Finance) and DWS.

Christopher Cundy: How well is climate risk understood in underwriting and investing?

Rowan Douglas: Insurers have got a pretty good understanding of physical climate risk in their underwriting portfolios. After the events of 1992, we learned claims files are not enough to understand current, let alone future, risks. The catastrophe modelling revolution led to stress testing of our portfolios for events far beyond what have happened already.

But it's only very recently that those tools and techniques from underwriting have been thought about on the asset side. The challenge is usually around data – the attributes held in investment portfolios are not configured to support physical risk modelling. Clearly there is an opportunity to enhance that, which will take a bit of time. 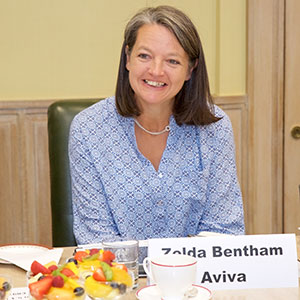 Zelda Bentham: In Aviva's general insurance and asset management sides, there is some interaction already with our GIS [geographic information systems] team that helps us underwrite the appropriate business, and make sure that we are not aggregating exposure to particular climate events. We can do that from an insurance point of view through our flood mapping etc., and on the asset management side for our real estate or infrastructure investments.

There is a lot more we can do, particularly in taking that insurance knowledge and using it to support other financial services. Banks do not take into account their aggregation of exposure and risk at the moment, because they have got insurance as a safety net. So, if insurance was not there, what would they fall back on?

Tom Herbstein: It is a crucial point: we talk about the split between the underwriting and asset management side of the insurance industry, but you can also say the financial services sector as a whole does not work as closely as it should. The more we understand the systemic exposure of the financial system, the more conversations will start.

A recent example of work in this area is ClimateWise's physical climate risk project. It is running banks' geo-coded mortgage portfolios through insurer climate models to highlight future geographic concentrations of climate risk.

Otto Bedford: There are some fairly obvious direct exposures: for example, if property blows down in a hurricane, there is a clear route to accumulation of financial loss. When you look wider, as in the potential for a really bad cat event leading to a wider economic downturn – which actually would have a more pervasive impact across your investment portfolio – it's much harder, as there is no data on a massive catastrophe in the modern economy to calibrate to. Even Tohoku, an earthquake with a tsunami that caused nuclear fallout, did not have a wide economic impact. 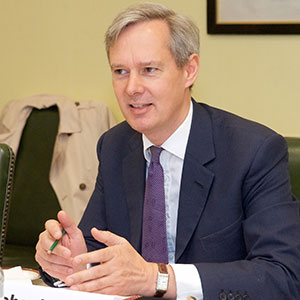 Better disclosure is the next phase of development, along with introducing physical climate risk protocols (a standardised framework to measure and manage the risk).

Rowan Douglas: There has been some very promising work done in the last two years. We now need to do even more and accelerate the adoption of cat modelling expertise into the climate risk and sustainability domain.

Zelda Bentham: Look at Solvency II, where sovereign bonds are classed as low risk. But when it comes to climate risk, both physical and transitional, that might not be the case: maybe the country is low-lying or even invested heavily in fossil fuel companies. To be able to, under Solvency II, put a climate risk on those sovereigns, will help insurance companies understand where those risks are from an asset point of view.

What is physical climate risk?

The increasing concentration of greenhouse gases in the Earth's atmosphere will lead to various changes in the climate. The most widely anticipated effect will be a rise in sea levels, but scientists have also predicted more intense and more frequent hurricanes, droughts and flooding.

These physical changes will increase risk for insurers in regard to their underwriting and investments. For example, higher sea levels make underwriting coastal property riskier; returns from investing in real estate in coastal locations may also be negatively affected.

What is transition risk?

As governments and business make the push towards a low-carbon society, various risks emerge. For example, if policies are introduced to limit the emissions of greenhouse gases, it will make coal-fired energy generation less attractive. There could be major shifts in the value of certain assets, or the costs of doing business could increase.

Otto Bedford: It is unreasonable that according to the Solvency II standard formula you can hold Greek government bonds at a low capital charge, and have equity in Coca Cola and be charged through the nose.

Also, insurers are proud of the efforts they put into cat modelling, but the industry is not as good at understanding resilience and underlying exposures. You end up getting into supply chain and production risk – the business interruption and contingent business interruption elements – where cat models often come unstuck.

Michael Lewis: We now have extraordinarily detailed data about individual production sites and supply chains of the world's largest corporations, but this has only become available recently. I would applaud the work of Four Twenty Seven which has brought together facility-level data alongside climate models to a level of resolution of 25 square kilometres, so we have incredible granularity on corporations' risk as it relates to extreme weather events.

But we need to be mindful of the possible risk of unintended consequences. Do companies start moving production sites from emerging markets, and particularly Asia? Because that is where most of these physical risks are going to appear, which will be felt particularly hard given the increasing urbanisation of coastal communities. We have to find ways of encouraging companies to improve resilience and make it an incentive to mitigate and adapt.

Christopher Cundy: Do you think insurers themselves are thinking about climate and catastrophe risk in the right way?

Rowan Douglas: I am always railing against this pervasive view that insurers are not focused on climate. I think they are, but they have used a different language, and they struggle to realise our language has to change if they are to help.

'Climate' technically is patterns of weather. We record weather data, find patterns, and then we worry about extreme patterns of weather. So insurers absolutely are concerned about climate, its variability and how it will evolve in time. Insurers have an incredibly acute understanding of the risks of a changing climate.

But it's important to observe that the largest driver of climate risk in an insurance portfolio is not the changing hazard patterns, it's the changing exposure patterns. For example, the wildfires in California are occurring because temperatures are a bit warmer, but the main driver of loss has been ignition sparking-type events – it's a vulnerability and a liability issue.

Otto Bedford: By definition, if you consider an extreme term period, beyond 1-in-200, your risk is driven by events with the potential for very large loss. It drives your mind towards nat cat risks, which are better modelled than other risks, and tend to get more attention. There are probably other risks which could cause those losses, but it is hard to identify the underlying drivers.

Tom Herbstein: We were involved in a project in South Africa about 10 years ago, looking at the drivers of climate loss in the local environment. The study found that in most instances, over 50% of the loss was driven by proximate drivers of risk, for example man-made changes to local ecosystems.

For example, it was found that the drivers behind the flooding of a coastal town was not increased rainfall but instead deforestation and the mismanagement of the local estuary mouth that was allowed to clog up. This highlights the value of risk mitigation or resilience in helping to manage exposure.

Michael Lewis: Which is where the data has a critical role to play, because you can then go into the particular sector or country with the right technology. It also helps to bridge the disconnect between the 'donors' and 'recipients'.

Part two of this roundtable will be published on Friday 10 August.