The European Investment Bank has been progressively aligning the practice of its Climate and Sustainability Awareness Bonds with the EU's efforts to standardise the market. Aldo Romani shares the key takeaways

Environmental Finance: What is the importance of the EU taxonomy for sustainable activities? 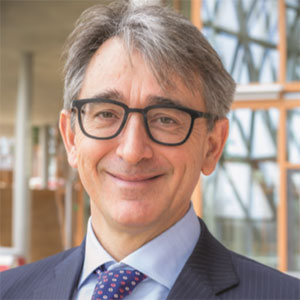 Aldo Romani: The EU taxonomy should help to make things more understandable to issuers and investors, to clarify with more precision what they are talking about when they talk about sustainable finance, and to facilitate the comparison of their choices and strategies.

For this purpose, the taxonomy regulation itself is more important than the actual first iterations of the taxonomy. That's because the taxonomy regulation introduces a framework that is logical, and that makes it more difficult for players to dress up what they do with fine words, helping investors to ask the right questions. For that reason, it is bound to drive forward sustainable finance.

The core message I would like to convey is that even if the taxonomy is not yet fully in place – and there are endless debates on the proposals – there is no need to wait for the final version of the taxonomy to act.

For us at the European Investment Bank (EIB), the first priority is early alignment with the logic of the taxonomy.

On this basis, issuers and investors can already start collecting relevant information and structure it in a way that makes it clearer and more comparable. The taxonomy itself is likely to change anyway – it will go through a recalibration process over time, with the help of the markets.

There are three core principles to think about: concentrate on the most relevant aspects of potential contribution to sustainability objectives, make sure the screening criteria are easy to use, and put in place the conditions for a reliable verification of their compliance.What does not live up to these requirements will not work in the market

AR: EU legislation is not moving away from the GBP-approach. It is, rather, making it more effective. Creating the conditions for the market to work better – that is what DG FISMA has been aiming to achieve at the European Commission from the very start.

The market has worked hard to promote the GBPs and establish common rules of game that are an expression of broader consensus.This phase of self-development has unfolded successfully and achieved its primary objectives. An official definition of core evaluation criteria is now needed to make those rules of game more directly relevant in an operational perspective.

At the EIB, we have advocated since the end of 2015 the necessity for a "common language", a shared core classification that allows for different approaches to sustainability but makes them more objectively comparable.The IFI Framework on green bond impact reporting harmonisation that Dominika Rosolowska and I coordinated at the time was a market-driven initiative that set the scene for further convergence of definitions and impact assessment methodologies. The framework was awarded Green bond market initiative of the year by Environmental Finance1.

Notably, a limited set of more precise criteria permits to focus on core information, which will be collected and reported more systematically as a result of the taxonomy. In the end, it is a simplification exercise that is bound to put markets in the driving chair – enabling funding officers like me to make more directly understandable to investors how the funds are expected to contribute to sustainability.

It is the first time that the same framework and criteria can be used for both the lending and the funding activities of the Bank.

EF: Is the taxonomy/GBS too binary?

AR: The notion that something is in or out is instrumental to the clarification of the status quo for the further promotion of sustainability via efficient investment decisions. It is part of an incentive mechanism.

If green bonds can shed light on the portion of an issuer's activities that can be reliably presented as green and verified as such by reference to the taxonomy, there is a greater incentive for the issuer to clarify in what sense the rest of its activities can be qualified as sustainable – or not.

On this basis, investors can ask: "What is the strategy going forward? Can progress on the way to more sustainability be confirmed by factual evidence (e.g. via a growing share of green bonds in the total funding programme)?" There is a knock-on effect.

Despite the challenges, the effort to produce a rulebook is extremely useful – it commits to more clarity and accountability. In light of the growing relevance of sustainability in the competition for funds, that's a leap forward for the way the whole market operates.

Sustainability is relevant not only for sustainable investors, but more generally for investors that understand the impact of transition risk on the future value of their assets and need reliable information thereon.

External reviewers are already starting to assess the data needed under the taxonomy regulation. This will gradually enhance the comparability of their analyses, which WWF and EIB have been advocating jointly since 20172. We are going in a direction where market players will increasingly use the taxonomy to form a factual opinion that does not need to rely on second parties' authority.

At the same time, the analysis of taxonomy-compliance will provide a more solid anchor for the definition and relative assessment of tailor-made standards reflecting the preferences of individual investor communities. For example, there could be green bonds that are in alignment with the taxonomy plus additional criteria, such as excluding nuclear.

In this way, the reliable clarification that comes through financial products benchmarked against the EU taxonomy can be seen as the start of a broader transformation process directed by more efficient pricing of investment alternatives.

EF: How is the EIB aligning with the nascent EU GBS (which is based on the EU taxonomy)?

AR: At the EIB, our objective is to have at least 50% of new green finance per year by 2025. In the Climate Bank Roadmap 2021-2025, the Bank has committed to aligning its tracking methodology for green finance with the framework established by the EU taxonomy regulation.

Climate and Sustainability Awareness Bonds (CAB and SAB) documentation has been tuned to evolving EU legislation on sustainable finance since 2018. In the capital markets, the CAB and SAB Frameworks3 are thus becoming a litmus test for the progressive alignment of the classification of EIB's lending activities with the EU taxonomy regulation, starting with the technical screening criteria for substantial contribution (TSCSC).

Last year, for the first time, we published in the CAB and the SAB Frameworks the full set of TSCSC used in the CAB/SAB eligible areas in 2020. There is a higher degree of transparency, and, as mentioned, accountability.

It is a two-step process, in which the Projects Directorate first applies the EU taxonomy (or its logic, pending the taxonomy) to the classification in the project areas; it then makes such areas eligible for CAB/SAB allocation and the associated reasonable assurance by an external auditor, presently KPMG. In 2020, for example, it was decided to add low-carbon transport and technologies to the already existing CAB eligibilities (renewable energy and energy efficiency).

At the same time, this disclosure included a comparison of the existing TSCSC for renewable energy and energy efficiency with the criteria of the EU's Technical Experts' Group on sustainable finance (TEG). Such comparison led to the decision to remove non-TEG aligned activities from the CAB-allocations in 2021.

For 2022, the objective is to secure full alignment of the CAB criteria for substantial contribution with those of the EU taxonomy delegated act that came into force in January.

In the meantime, CAB/SAB issuance has gone from 7% to 23% of our total bond issuance programme (See chart).

EF: What are the challenges of implementing the EU GBS?

AR: Some areas are not yet covered by the EU taxonomy – what do you do with those? The new Do-No-Significant-Harm (DNSH) – and Minimum Safeguards (MS)-criteria require additional information vis-à-vis existing practices of project evaluation – how to treat projects with substantial contribution for which such information may not be collected retroactively? Existing and already allocated green bonds may need reopening for the maintenance of a liquid pricing reference in the primary market – how do you label them if the eligibility criteria have changed, and under what conditions?

These aspects are relevant for issuers and policymakers alike. I personally believe that some continuity should be ensured to facilitate the smooth development of the market during the transition to the new regulatory regime.

In the areas that are not yet covered, the mere logic of the taxonomy regulation would help explain why you feel they are eligible, stimulating a debate that could involve second party opinion providers and research centres. Evidence of the use of public environmental and social standards addressing core DNSH-issues could suffice to include already existing projects until the majority of allocation is to new fully DNSH-compliant projects. Taps of existing issues could be considered EUGBS- compliant if their proceeds are allocated according to the new criteria.
These are structural questions that are currently under debate.

AR: It's a very important touchstone.Whether the market will be marked from the beginning by widespread adoption of this label, I don't know – quite a lot depends on details that are still under discussion. I am convinced there will be progressive alignment with it over time.

Whether some actors like it or not, this is an area where investor attention is growing, inter alia because the taxonomy regulation is the pillar of EU legislation on disclosures (CSRD, SFDR).

It's not possible to just hide behind a statement or a beautiful CSR document. It is becoming increasingly important to provide material evidence about your sustainable economic activities and this needs to happen in a consistent and comparable manner, i.e. by reference to externalised criteria.

The debate on DNSH is important, because if it's decided that there must be full alignment with the new requirements and it is confirmed that the required information is not available on existing projects, it will take time before new fully compliant projects come to represent the bulk of allocations.

In any case, I think the importance of this standard lies not only in the number of bonds that are 100% aligned with the taxonomy from the start. What is essential is the progressive tuning of all market participants to its logic.

It's possible to take this as an opportunity to improve the quality of information for a more effective partnership between finance and the real economy in favour of sustainability.

The market and society will benefit from the EU GBS beyond its direct use in the short term.

Aldo Romani is Head of Sustainability Funding in the Capital Markets Department at the European Investment Bank.

1. A.Romani and D.Rosolowska, An analysis of the IFI framework on green bond impact reporting harmonization, Environmental Finance, 8/07/2016.
2. WWF, EIB and Institute for Climate Economics, Green bonds – A practitioner's round-table to guide the development of effective and credible frameworks for external reviews", 9/6/2017. In: EIB and China Green Finance Committee, The need for a common language in Green Finance. Towards a standard-neutral taxonomy for the environmental use of proceeds, 11/11/2017, Annex IV.
3. https://www.eib.org/attachments/fi/eib-cab-framework-2020.pdf; https://www.eib.org/attachments/fi/eib-sab-framework-2020.pdf