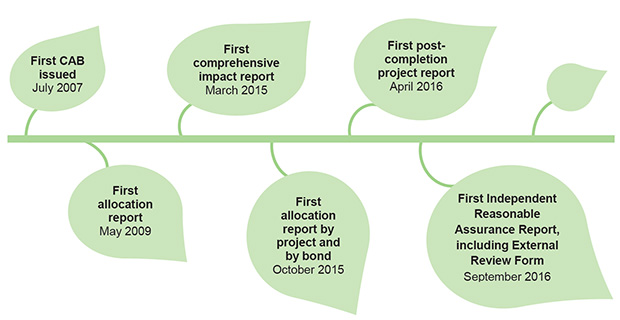 Transparency and accountability were established as core pillars of the global accord on climate change during COP 21 in Paris last December. They can set in motion a virtuous circle of increased market confidence, triggering additional green investments.

Through transparent reporting, the money raised with green bonds can be traced, enabling an understanding of the environmental impact and actual operation of projects financed.

Knowing where the money went, assessing the environmental benefits and verifying impact claims ex-post is the triad deemed key to bring accountability to climate financing via fixed income instruments. In addition, comprehensive and credible reporting is one of the most efficient ways to address the issue of 'greenwashing' that often accompanies the public debate about climate finance.

With the development of the green bond market, different types of reporting have emerged: reporting on the use of proceeds, the impact of projects, and ex-post reporting.

Reporting on the use of proceeds

In March 2007, the European Union's Energy Action Plan set ambitious targets in the areas of renewable energy and energy efficiency, urging EIB to engage in these areas. EIB chose to emphasise its commitment via a climate-related capital market product, fostering public awareness and reaching new investors by issuing the world's first green bond – a €600 million transaction labelled a 'Climate Awareness Bond' – in June 2007.

EIB's 2007 issue also pioneered the ring-fencing of proceeds to match disbursements, providing investors with a transparent link between climate funding and lending. This approach has been validated by the market and is recognised as best practice.

The green bond market has exploded in the last couple of years, with new issuers and markets entering, growing to about € 150 billion of labelled green bonds outstanding. For us, as part of the multilateral development bank community who pioneered the market, it is rewarding to observe this development.

Use of proceeds reporting is the backbone of credible green bonds – knowing which projects were financed in a given year enables investors to evaluate if their money was spent in an environmentally sustainable way and in line with their investment mandate. Issuers have a variety of resources available to obtain guidance on green bond issuance and reporting.

The Green Bond Principles (GBP) – organised by the International Capital Market Association (ICMA) – bring together more than 100 issuers, investors and underwriters of green bonds. The voluntary guidelines published and updated by the GBP provide valuable guidance with regards to information disclosure.

Reporting on the use of proceeds is best practice in the green bond market as it enables stakeholders to understand which projects were backed by an issuer's green bond programme.

Some green bonds have a dedicated project – or projects – at issuance, whereas others are dedicated to specific sectors. Depending on the pool of underlying assets, issuers may report on individual projects or on a portfolio of disbursements. Project-level reporting is best suited for issuers who have large individual projects backed by their green bonds, whereas aggregated reporting makes sense to summarise disbursements to many small projects as often is the case for financing of energy efficiency schemes and small and medium-sized enterprises.

The GBP also recommend that issuers disclose if green bond proceeds are used to refinance existing projects or if money is allocated to new projects. Use of proceeds reporting is deeply rooted in the European Investment Bank's (EIB) Climate Awareness Bond programme. EIB has chosen to finance only new projects, as opposed to refinancing existing ones.

Since its first green bond issue in 2007, EIB has been reporting on the use of proceeds, first in the bank's annual sustainability report and subsequently in dedicated Climate Awareness Bond newsletters. Since 2015, EIB has further increased transparency by reporting to which projects the proceeds of a specific EIB green bond were allocated. On a semi-annual basis, EIB communicates on its green bond issuance, the use of proceeds, and the balance of its green bond portfolio.

Reporting on the impact of projects

To improve transparency and highlight the environmental benefits of green bonds, EIB pioneered reporting on the expected impact of the projects financed in 2015. This was done as part of an initiative developed jointly with other important issuers of green bonds. Addressing the issues of data comparability involved in the assessment of projects, 11 leading international financial institutions (including EIB) jointly developed a framework to harmonise impact reporting.

Ex-post reporting is the communication of the actual outcome of projects after their completion. The development and standardisation of ex-post reporting will take transparency and accountability to the next level, and EIB aims to set the tone also in this area. In 2016 the EIB started to publish environmental and social reports on completed projects. These public reports affirm the completion of the projects and describe their compliance with EIB's environmental and social standards. It is important to bear in mind that this reporting is not available at the issuance of green bonds - and may sometimes come only after the bond has already been repaid, depending on the projects financed.

Green bond issuers enhance the reliability of their reporting through external reviews, as recommended by the GBP.

In September 2016, the EIB published an independent reasonable assurance report, provided by KPMG, EIB's external auditor, on its green bond process and reporting. This report confirms the alignment of EIB's green bond activities in 2015 with its internal criteria, as well as with the GBP.

Promoting standardisation and comparability of information

Thanks to a consensus built within dedicated working groups, the GBP has provided standardised forms that facilitate the comparison of green bond issuers and of external reviews. The first forms were published on ICMA's GBP resource page in October 2016 - comprising almost 30 information forms and 20 external review forms.

It is important that future developments focus on the valued-added of reporting so that it does not merely become a burdensome and bureaucratic exercise. Comprehensibility and comparability are essential to foster continued sustainable growth of the green bond market. This may necessitate greater transparency - or even convergence - on underlying assumptions for the impact assessment (for example the number of days of sun for solar projects). Next steps are likely to include defining 'green', as there is pressure to better define the greenness of projects financed. 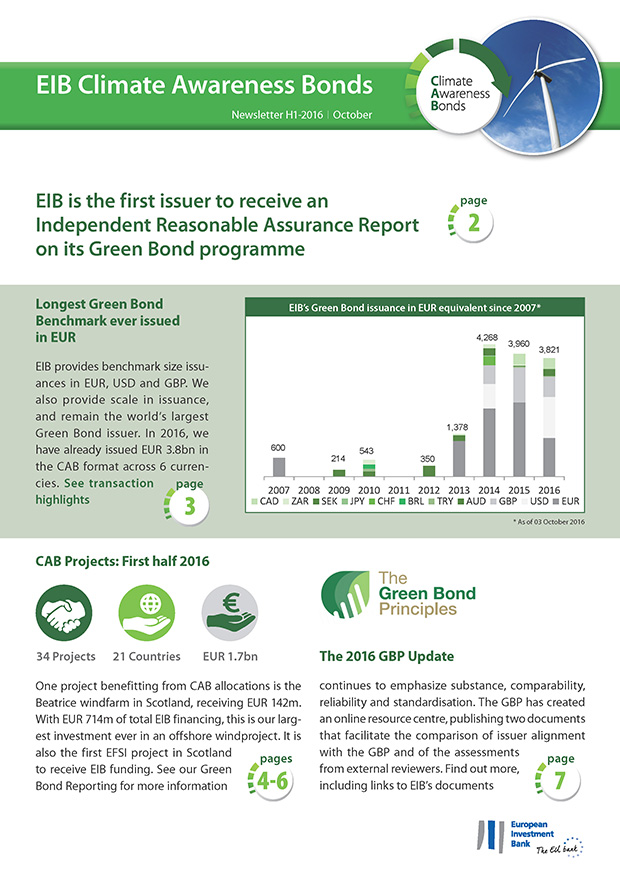