Japan's green bond market has lagged behind that of Europe's – but, with issuance picking up in 2018, that is set to change, say Nomura's ESG bond experts

Environmental Finance: Nomura has a long history of involvement in the green bond and wider sustainable investing market. Can you explain how the bank got involved, and where it currently focuses its activity?

Nick Dent, Head of Debt Syndicate: The bank was selling themed bonds – issued by supranationals and linked to a range of environmental and social projects – to retail investors in Japan from 2010, so we were involved fairly soon after the creation of the market. Structured as Uridashi bonds, and typically denominated in foreign currencies, these are usually fairly small issues, but there’s now been over 260 of them, totalling more than $12.5 billion equivalent in terms of issuance amounts.

We’re still active in that market but, since 2015, we’ve diversified our green and social bond business into the institutional side of the bond market. We’ve evolved with the types of deals that are coming to market: we’re acting for issuers in a whole range of sectors: most recently real estate, airlines, shipping companies, banks issuing bonds to meet incoming additional regulatory capital requirements (ie loss-absorbing debt for TLAC/MREL purposes), such as a number of samurai social bonds for BPCE or for wider funding purposes such as the Euroyen bond for Bank of China, among others.

EF: Japan is currently under-represented in terms of green bond issuance – it was ranked 13th globally at the end of the third quarter of 2018. What are the reasons for that?

Jarek Olszowka, International Head of ESG: The public ESG market in Japan was very slow from 2014 to 2016. From an institutional, capital markets perspective, there was very little going on – literally just a handful of public ESG bonds issued in total over that three-year period. But the ESG market in Japan has grown exponentially since then: there were more than 25 issues in 2018 alone. 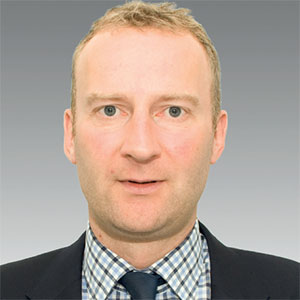 ND: Japan has gone through the growing pains you see in every new market, perhaps one or two years behind Europe. Buyers and sellers have been grappling with issues seen elsewhere: around the additional costs borne by issuers in setting up green bond frameworks and issuing bonds, and ongoing discussions whether there should be any kind of “greenium” associated with issuing in an ESG format etc.

Corporates in Japan have been very focused on the additional costs related to green bonds, on the incremental costs and work for the treasury, other internal divisions and senior management, rather than looking at the wider benefits of issuing green bonds around becoming overall more ESGfocused etc.

However, the offshore market in Japan developed quite quickly, with agencies such as DBJ [Development Bank of Japan] and JICA [Japan International Cooperation Agency] being very active internationally, building experience in this space that is now being applied to the onshore market.

EF: Japan’s Ministry of the Environment introduced its Green Bond Guidelines in 2017 – how have they been received?

JO: The Japanese government, including the Ministry of Environment, has taken a leading role in helping to shape and further promote the development of the ESG market in Japan. Its guidelines were designed to be aligned with the ICMA Green Bond Principles, yet at the same they were dovetailed to cater for Japanese capital markets-specific idiosyncrasies. Having the guidelines published in Japanese was also helpful to parts of the domestic issuer and investor base. The guidelines have definitely helped to reduce some of the early barriers faced by the nascent market.

In addition, the Ministry of Environment has also moved to offer subsidies to offset some of the costs issuers have to incur while issuing in green format. These include payments of up to JPY50 million to cover the cost of external verification, such as second-party opinions, and certain of the consultancy fees related to establishing a green or social framework. These were only recently introduced, so we’ve yet to see their full impact, but they will certainly be of help to the growth of the market in Japan. 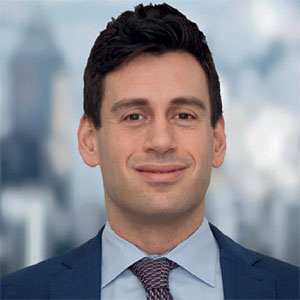 The Ministry of Environment additionally established in 2018 the Green Bond Issuance Promotion Platform, to help showcase best practice among issuers and to share information on ESG issuances and on ESG trends inside and outside Japan.

EF: Nomura has brought a number of first-of-their kind bonds to market from Japanese issuers. What do these bond issues say about the state of the Japanese market?

ND: Because Japan has set a framework that’s very similar to that in the international market, that creates an opening for innovation. As long as you set very firm principles, it allows some industries that were previously excluded from the green bond market to start looking at effective ESG measures through finance.

For example, the NYK Line bond was the first green bond globally from the shipping sector, enabling the company to partially decarbonise shipping. The proceeds were used to refinance LNG-fuelled ships. The proceeds from the bond from ANA Holdings Inc, the Japanese airline, were used for new, green energy efficient training facilities.

EF: There has also been recent activity among real estate investment trusts. Why is that?

JO: There’s a big drive from the government to stimulate new construction, as part of its Abenomics initiative, and for that to have a multiplier effect on the wider economy. A lot of these buildings are being built to high environmental standards. Globally, green buildings are the second most popular underlying for which green bond proceeds are applied, just after renewable energy. For Japanese REITs [real estate investment trusts], green bonds also offer an opportunity to try and widen their investor base and make their offering more appealing.

EF: Many of these bonds have been relatively small – equivalent to $50-100 million in size. Would you expect to start to see some of these issuers come back with benchmark-sized bonds? 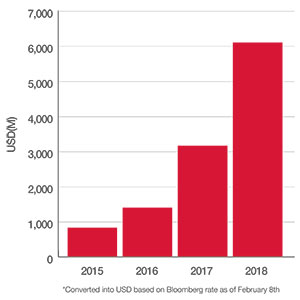 ND: We were in Japan recently talking to a number of corporates, and we certainly see the motivation to print in larger sizes. For many of them, they’re still in the early stages of developing green bond frameworks: they are working through their internal architecture, working with the secondparty opinion providers, having discussions with the Ministry of Environment etc. It’s also worth noting that, compared with conventional bond issuance, which usually takes place early in the financial year, ESG issuance tends to peak in September/ October, because it takes a number of months to go through the necessary processes and gather assets. A number of issuers, especially among sovereigns and supranationals, prefer to get their funding needs in conventional format out of the way first.

EF: What is demand for green bonds like among Japanese institutional investors, meanwhile? What, if anything, could encourage greater uptake?

JO: Compared with Europe, it is fair to say that the domestic investor base is still less developed regarding ESG. Dedicated separate green bond funds are yet to emerge. But we’re seeing a change in terms of focus and awareness on ESG issues in Japan. This has been led by the Government Pension Investment Fund, the biggest pool of assets in Japan, and an early signatory to the Principles for Responsible Investment. Last year, it published a report with the World Bank on how to integrate ESG factors into fixed income investing – they are taking the lead. The increased focus is certainly now becoming more mainstream rather than just being a niche.

The level of understanding of ESG bonds has in the past years been lower than elsewhere, but we’ve seen a significant increase in interest over the last 12 to 18 months. It’s somewhat circular: because of very little issuance in 2014- 16 in this format, investors weren’t dedicating resources to understanding the market. But with over 25 issuances in the last year alone, investors are getting very quickly up to speed.

As in other countries, it’s certainly an education process to explain why both issuers and investors should spend additional time, resources and, in some cases, money, compared with issuing and investing in non-ESG bonds. I also wouldn’t understate the problems caused historically by the language barrier. Now, however, for example most of the main secondparty opinion providers are setting up offices in the region and are offering opinions in both English and Japanese.

ND: It’s worth remembering that Japan is one of the biggest pools of institutional investment globally. I would point to the work done by the public sector that is paving the way for bigger benchmark issues; the work that DBJ and JICA have done or the Metropolitan Government of Tokyo – all that information share is really starting to open the buy-side up in Japan. This is why we’re really excited about it: we know how much cash there is to deploy in the region and a lot of it will be directed with ESG in mind.

EF: Nomura had a strong showing in social bond structuring last year, ranking the third-placed globally, lead managing on issuances totalling close to $4 billion of such bonds in 2018. What was behind that?

ND: It wasn’t a conscious decision to target the social bonds market, but it happened that we were involved with a number of large transactions. While our ESG business is much broader than that, we’ve certainly enjoyed the success we’ve seen in that part of the market. 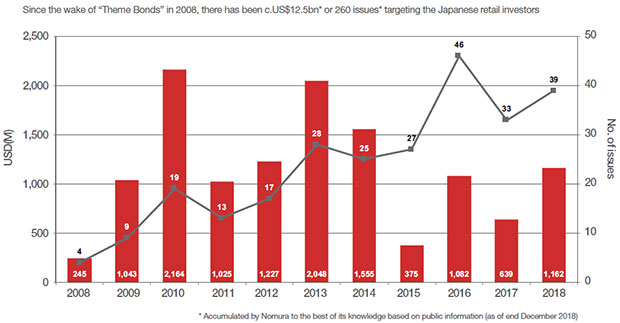 JO: The European ESG bond market is much more focused on green, and on climate change mitigation and adaptation, whereas in Japan there is, in equal parts, a lot of focus on social-themed issuances as well.

JO: Last year, the biggest growth in the green bond market year-on-year was from the Asia-Pacific. We’ve seen Japan’s share of Asia-Pacific (ex-Australia) issuance jump from around 1% two or three years ago to almost 10% last year.

We’re expecting to see more first-time issuers come to the ESG market; we’ve got quite a few in the pipeline, with whom we’re advising on structuring, selecting assets, and whether they should target the onshore or offshore market. We also expect a number of existing Japanese ESG issuers to look to broaden their investor base, with follow-up issues in dollars or euros.

ND: I think there’s going to be a lot of action on the buy side in 2019. As we’ve noted, one thing we haven’t seen as yet either in Japan – or in the wider region – is a lot of dedicated ESG bond funds. I predict that will be a big growth area over the course of this year. On the sell side, you can see the market’s structure is in place, the architecture is there; it’s just a matter of time and process to get through before the issuance comes through. But on the buy-side, I think that there’s going to be an explosion in demand.